An inept batting display, which ultimately resulted in an inadequate first strike total of 161 all out in 48.2 overs, was the foundation of Canada’s massively disappointing loss to Barbados in their second match of the 2019 Cricket West Indies Colonial Medical Insurance Regional Super50 Competition. Opting to take first strike on a pacy St Kitts Conaree Cricket Center pitch, Canada’s batsmen were no match for the Barbados Pride new-ball speedsters Chemar Holder and Roshon Primus.

Making full use of the favorable pitch conditions, Holder (3-34) and Primus (3-32) rocked the top order, taking wickets at regular intervals to leave the Canadians struggling at 88-6. The Canadians lost debutant opener Ha0bindeep Sekhon for second ball duck with the score on just 5 and never recovered from that disaster of a start. 5-1 quickly became 6-2 when the experienced Rayan Pathan played an injudicious cross batted swipe to only the second ball he faced from Mayers to be clean bowled for four.

Canada’s eventual total of 161 was underpinned by Arslan Khan who struck a defiant 76 off 128 deliveries. The 20-year-old Khan arrived at the crease with his side in turmoil at six for two in the third over and watched as they slipped further to 29 for four in the 15th over with the further losses of Nitish Kumar 4 (15) and Shahid Ahmadzai 6 (22).

Khan however put his head down in an innings containing five fours and a six, He featured in successive partnerships of 21 for the fifth wicket with captain Kanwarpal Tathgur (5), 38 for the sixth wicket with Harsh Thaker (18) and 34 for the seventh wicket with Kanwar Mann (8). Khan finally perished in the 43rd over, swinging Roshan Primus to short mid-wicket where Ashley Nurse took a low catch. 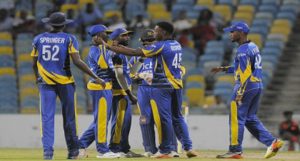 Set a paltry 162 for victory, the Barbados Pride batsmen made light work of the target to get home with 20 overs to spare. Openers  Kjorn Ottley and Leniko Boucher put on 62 off 77 balls for the first wicket to ensure there were no hiccups in the run chase. Kjorn Ottley finally tasted form following low returns in his previous two innings, top-scoring with an upbeat unbeaten 70 off 84 deliveries.

At the other end Leniko Boucher got a start with 26 before he departed. Boucher hit five boundaries in a 48-ball knock before missing a straight one from left-arm spinner Shahid Ahmadzai to be lbw in the 13th over. Ottley and Nicholas Kirton then took charge in an exactly 100-run, unbroken second wicket stand.

Kirton, who had represented Canada in the recent Dubai hosted ICC T20 World Cup Qualification Tournament, was yet again fluent in notching 56 not out off 48 balls. He pummeled five fours and two sixes, to race to his half-century off 46 balls by clearing the ropes at long off with a delivery from seamer Nauman Zafar in the 30th over.He finished the game with the very next delivery, dragging Zafar to the mid-wicket boundary.