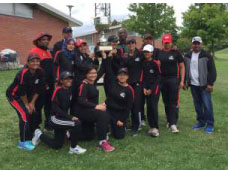 As one of the few cricket entities in Canada to host a Women’s team, Tranzac Cricket Academy has been in the forefront of recently renewed efforts to drive Canadian Women’s Cricket forward. Tranzac’s Women’s team emerged as winners of the 2018 Scarborough Cricket League.

Within recent years Women’s cricket has become one of the world’s fastest growing sports. Although the first ever Women’s World Cup had preceded the Men’s version by a year, generations of gutsy women who had previously taken to women’s cricket had not been able to make the kind of impact that the current generation has.

There are a lot of factors responsible for the unprecedented growth in recent years but the most significant of these is the emergence of professional leagues and the consequent live broadcast of the games. While Australia, England, India, South Africa, New Zealand and the West Indies women dominate the sport, countries such as Sri Lanka, Pakistan, Bangladesh, Ireland are making big inroads. The International Cricket Council has mandated that all members should have a women’s program alongside the men’s and while this augurs well in theory to promote the sport among women there are many practical issues and hurdles that still need to be surmounted.

Here in Canada, where there is a diversity of population unlike any other country, many Canadians with roots from these cricket playing nations yearn for opportunities to learn and play the sport. Despite the long winters, the fans and fanatics of this game are forever seeking out places where they can train and keep in touch, eagerly awaiting the summer when they can go outside and enjoy the weather doing the one thing that they so strongly crave – play cricket!

For the women aficionados of the game the Tranzac Cricket Academy located at 185 Carlingview Drive, Etobicoke has been a welcoming place for many years now. What began as Coach Sheriff Boodhoo’s individual effort to encourage women and girls to take to the sport has now transformed into an academy where senior players who went on to represent Canada are now encouraging girls and women by offering their time and experience, creating an atmosphere of congeniality and support. At a point in time nearly half the players on Team Canada’s roster were either from the academy or had some connections to it.

Creating A Retirement Nest Egg – The Sooner You Start The Better