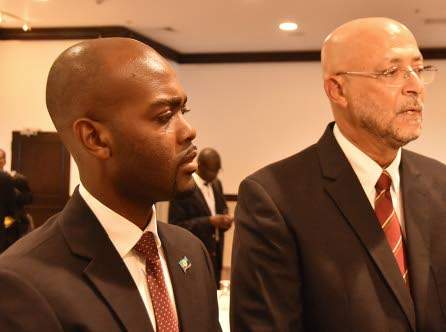 Will this selection policy ensure that the West Indies will go into the World Cup with their strongest squad possible?

Absolutely and that's a policy decision which was made even before we got into office. But it became effective immediately on us getting into office as we wanted it to be cemented before the World Cup. The last 10-11 days since the election, we've been bringing in changes in terms of personnel and policies to make sure that we can reach out to everybody who wants to play for West Indies. The people responsible for selecting, managing and leading the squad to the World Cup have been reaching out to players who may be interested, to let them know that the policy has changed and to be clear whether they are available or not, so that when the group gets together next week to make their final decision on the squad, they have as wide a slate to choose from as possible. The problem in the recent past we discovered was that it was more an informal policy that hovered over the selectors' heads. And I suspect they erred on the side of political caution and at times made decisions that hurt the team from being strengthened. That led to the policy makers pointing fingers at the selectors for only picking young people. But we know a successful cricket team needs a mix of seniority and young players.

Will the team also have a new full-time coach for the World Cup?

We are putting in place a very clear policy on that. It's no disrespect to foreign coaches. We will have international participants in areas where there's nothing of equal quality available regionally. But regional expertise is a priority for us and was a key area in our 10-point plan. We are very serious about that. That policy too will commence before the World Cup.

This is almost like a request on behalf of world cricket. Can West Indies please go back to being called West Indies and not Windies?

It's already happening. I didn't understand the extent to which the Windies brand was being developed. It has been a subject of discussion in the past but strictly from a commercial point of view. When we really got alarmed is what we saw during the qualifiers in Zimbabwe last year with Windies on the players' shirts. That really upset a lot of people. I can tell you in the World Cup this year, the team will be called West Indies and you'll see West Indies on the shirt, and you will not see West Indies omitted from the brand name in the near future.

You also come in during an era where a number of T20 stars from West Indies almost prefer playing in the many T20 leagues, and there've understandably been issues regarding contracts.

There are different elements to that. One of them is the issue of remuneration and the freedom to pursue one's career priorities. What concerned me was more how we drove some people away by our own insular and limited outlook on their needs. Players' needs are crucial. But the needs of cricket are equally crucial. If you are not communicating with players or having cordial discussions and understandings on both sides, and if there's no trust, then the best players will not sacrifice anything for what they consider to be the board. We will not ask players to sacrifice anything for the board. We will be reminding players about their responsibility to give back to cricket. I can tell you with my own conversations with some of these players that they would ideally prefer, given the right opportunity, to also play for the West Indies. In no way, will we be upset or disrespectful towards the rights of players to earn an income wherever they can. What we have to do is give them options that make sense to them and us. We cannot dismiss somebody for making a career decision.

Twelve months on from qualifying for the World Cup, the West Indies couldn't ask for a better time to welcome back some big names then.

That process of having to qualify just to get into the World Cup is one of the most humiliating periods in our cricket history. It was a very depressing thought. But the reality is we haven't won that World Cup for 40 years. We really have been struggling in ODI cricket and the qualifying process in the final analysis was a wake-up call that we needed. If we were able to get one or two players back into the mix, who themselves like Chris Gayle were worried about the situation, and decided to come back in. I think that it was a good start to a new era. We have to make sure that it's taken to the next level and it cannot be business as usual.

West Indies Women Off to England and Ireland