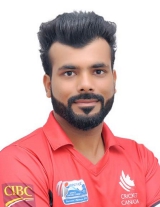 Cricket Canada has announced the names of a strong fourteen member Men’s Senior Team Squad to participate in the 2020 International Cricket Council (ICC) Cricket World Cup Challenge League A. The Tournament, which will be a part of the qualification process for the 2023 ICC Word Cup, will be held in Malaysia from March 14 – 27, 2020.

Canada will play fifty 0vers matches against ICC Division A country teams representing Denmark, Qatar, Singapore, Vanuatu and hosts Malaysia during the Tournament.
Experienced South African Amarinder Bhinder will be the Head Coach for the Canadian Squad, which will be managed by Carlos Ragoonath. Surendra Seeraj (Assistant Coach), Daulat Khan (Asst Coach/Analyst) and Tejash Patel (Physio) will be the other members of the Canadian Squad’s management team.

Akhil Kumar’s ICC U19 World Cup Team Of The Tournament 12th Man Selection Is An Inspiration To Others!