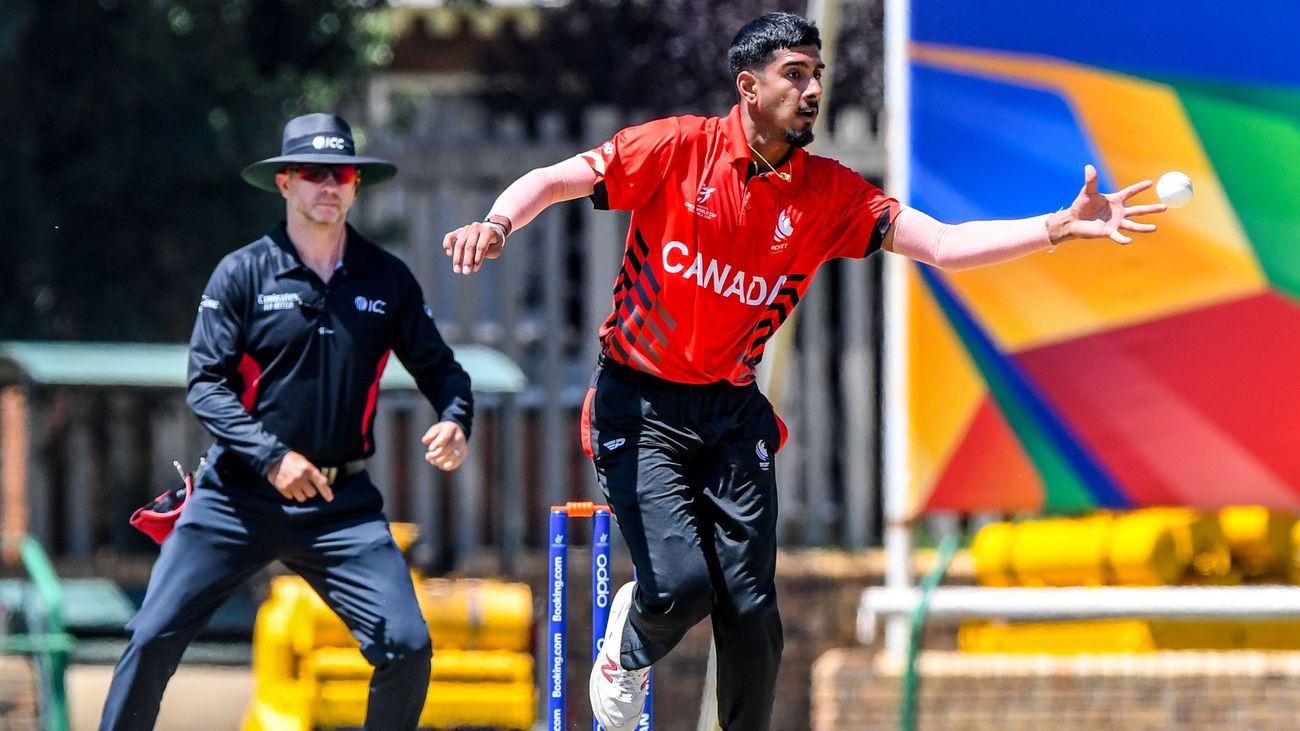 Rishiv Joshi: One To Watch!

In Canada’s January 15 first Official Warm-Up Match, prior to its participation in the International Cricket Conference’s (ICC) South Africa hosted 2020 U19 World Cup, which was against the West Indies U19s, Rishiv Joshi captured four wickets for just 23 runs from 8 overs! Those returns seemed to confirm the pre-Tournament hopes and expectations, held by many within Canadian cricket circles, that Joshi would be one of the emerging stars of the Tournament.
Regrettably, Joshi’s subsequent actual returns at the World Cup Tournament were wholly disappointing and unfulfilling of the lofty expectations that had been held of him. Joshi captured just 3 wickets for 210 runs during the 5 2020 U19 World Cup matches that he played for Canada.
As disappointing as they obviously were, Rishiv Joshi’s 2020 U19 World Cup performances should however now only be viewed as a required international standards barometer reality check, on a cricket career that has otherwise always been deemed to be evolving towards becoming something rather special. With a sense of maturity that’s well beyond his very young age, Joshi has since come to regard his 2020 U19 World Cup experience not as a disappointment, but rather as a necessary learning curve!
“I have gained a lot of experience from it and I’m going to take this experience into what I do now in my cricket career!”
Born in Toronto on November 4, 2000, the now 19-year old Joshi has been actively following his evolving cricket passion since the tender age of 10. Joshi credits former Canadian national player Wilbert Plummer, as having been the biggest influence on his early development as a cricketer.
Now playing his regular Club Cricket with the Toronto Cricket Skating and Curling Club, Joshi has tried to pattern his developing career by seeking to emulate the exploits of the likes of India’s Virat Kohli as a batsman and Australia’s Mitchell Starc as a bowler. Such lofty ambitions speak to Joshi’s mindset of being fully committed to adhering to the fundamental requirements of the highest standards of performance.
In pursuit of his cricket related goals, Joshi has already recorded many outstanding achievements of which he can be justifiably proud. He represented Canada at two U19 World Cups and once captured 8 wickets in an U23 Noida Tournament.
As chastening as it may have been, Joshi has nevertheless described his 2020 U19 World Cup participation as having been a good experience! “ There was a lot to learn from what we did and what didn’t do. This experience has made me grow as a cricketer!”
Joshi’s expressed hope is that he will now be able to take what he has learned from the 2020 U19 World Cup with him and that it will serve to positively guide the further development of his cricket career. His most important 2020 U19 Word Cup takeaways were a) The realization that whether you are batting or bowling you have to be disciplined and patient and b) the appreciation that fitness is what it all comes down to as an athlete, which means that if you are not fit you can’t play!
Rishiv Joshi’s immediate goal, as a still very young and aspiring Canadian cricketer, is to keep improving day by day. Towards that end, his intention is to become and remain as fit as possible while practicing his craft and trying to further improve his obviously already, relatively, immense skills every day. As he goes about doing so his progress will definitely be “One To Watch!
Bat & Bowl
Team
Opposition
Ground
Match Date
Scorecard
0/23
CANADA U19
UAE U19
POTCHEFSTROOM
1 FEB 2020
YODI # 1335
0*, 0/20
CANADA U19
JAPAN U19
IBBIES OVAL
30 JAN 2020
YODI # 1329
1/71, 26
CANADA U19
ZIM U19
POTCHEFSTROOM (UNI 2)
28 JAN 2020
YODI # 1326
2/59, 10
CANADA U19
S AFRICA U19
POTCHEFSTROOM
22 JAN 2020
YODI # 1311
1*, 0/37
CANADA U19
UAE U19
BLOEMFONTEIN
18 JAN 2020
YODI # 1303
6*, 0/24
CANADA U19
AUST U19
JOHANNESBURG
15 JAN 2020
OTHER OD
4/23
CANADA U19
W INDIES U19
DOBSONVILLE
13 JAN 2020
OTHER OD
2/32
CANADA U19
USA U19
KING CITY (NE)
14 JUL 2019
OTHER OD
0/8
CANADA U19
CAYMAN U19
KING CITY (NW)
12 JUL 2019
OTHER OD
1/12
CANADA U19
ARG U19
KING CITY (NE)
9 JUL 2019
OTHER OD
Full name: Rishiv Ragav Joshi
Born: November 4, 2000, Toronto, Ontario
Current age: 19 years 136 days
Major teams: Canada Under-19s
Batting style: Right-hand bat
Bowling style: Left-arm medium-fast