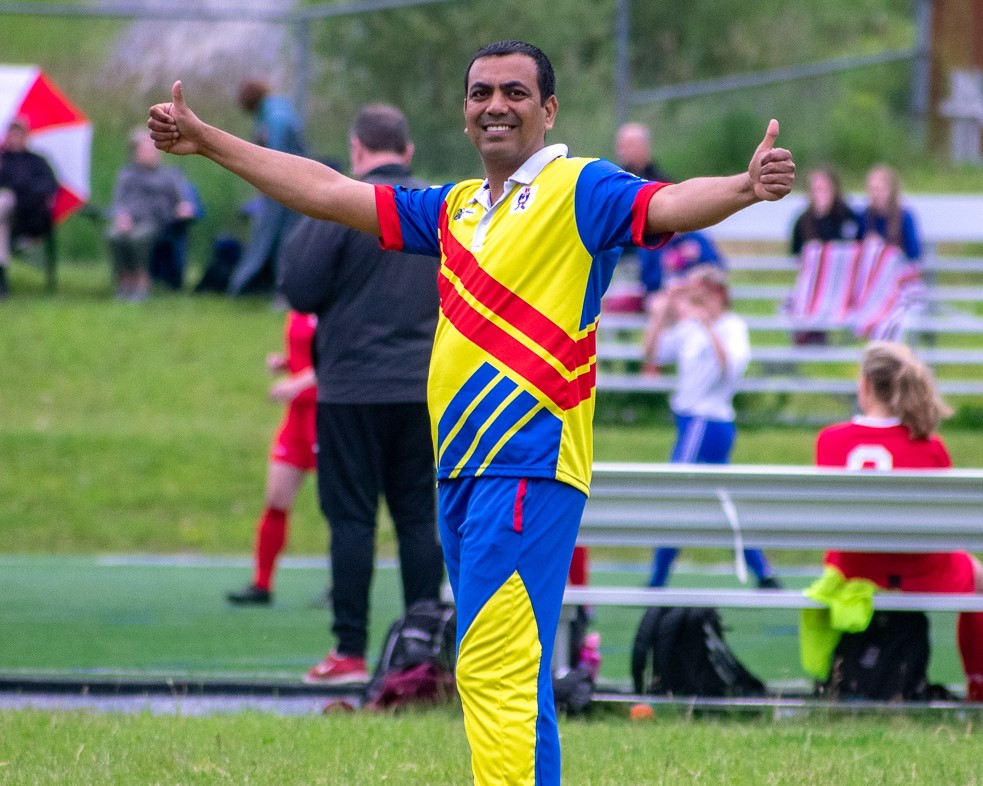 Amit Tamrakar recently celebrated his forty-fifth birthday and is the proud holder of two prestigious academic Degree; Bachelor of Engineering (BE) in Computer Technology followed by his Master’s in Business Administration (MBA).
As a qualified IT Professional, Amit now enjoys the flexibility that his current role as an IT Consultant provides being able to travel whenever and wherever needed. He is also highly proficient in all aspects of both the English and Hindi languages. Amit’s professional activities have kept him busy over the years. Not busy enough though for him to have also had an outstanding involvement in the further development of Canadian cricket, as a volunteer.
Amit Tamrakar always goes above and beyond in his volunteering activities which is evident from as far back as 2009. Between 2009 and 2013 he fulfilled various duties as a Member of the Brighton Rotary Club in Ontario, the last two years of which he functioned as the Organization’s International Director.
Two years later in 2015, Amit Tamrakar served in PMI New Brunswick’s Professional Development Days Committee, and later served in their board from 2016 to 2017 as Director of Professional Development.
His involvement in Cricket started in 2013 playing at an abandoned baseball field in Saint John, NB. He would often drive with his friends to Fredericton, NB to play with other clubs. In 2015 Amit decided to start Saint John Cricket Club as a new addition to Cricket New Brunswick and became the first President. During that period, he also served as the Team Manager for the New Brunswick Provincial Team that participated in the Maritime and Eastern Canada Cup Tournaments.
Amit’s achievements in his role with Saint John Cricket Club (SJCC) can only best be described as outstanding! He was directly responsible for SJCC’s registration as a Not-for-Profit organization and for its acquisition of additional government funding. In the first year itself SJCC had raised $14,500 through sponsorships, partnerships, fundraising, donations, memberships and special projects. Under his tenure, SJCC’s members also volunteered in Programs for school kids at three separate locations.
Amit Tamrakar was also directly in charge of SJCC’s social media presence, securing significant promotional exposure for the Club on its Website, Facebook, LinkedIn page, as well as on local radio and television programs. Amit also Lead SJCC’s home ground acquisition initiative and worked to secure pitches for the Club in two different locations.
After joining Cricket New Brunswick board as a Treasurer in 2017, he was also appointed to be New Brunswick’s Provincial Director for Cricket Canada. Amit revived Cricket New Brunswick as a Not-for-Profit organization, thereby allowing it to apply for additional government funding. He also secured funding from Cricket Canada for the development of a new cricket ground in Saint John, New Brunswick.
The New Brunswick Provincial Director role, in combination with his outstanding IT qualifications and experience, subsequently resulted in Amit’s 2018-2019 appointment as Cricket Canada’s Information Systems Manager. In the fulfillment of that role, Amit was directly responsible for all of Cricket Canada’s social media presence as well as launching of the new Cricket Canada website http://CricketCanada.org. Currently under development is the much-heralded, eagerly anticipated, Cricket Canada Players Portal.
Amit Tamrakar continued his highly commendable volunteer activities by reviving the Indo-Canadian Society of Saint John (ICSSJ) as President. ICSSJ aims at promoting and retaining the values and cultural traditions of the Indian community in Saint John. ICSSJ organizes events and festivals which showcase traditional performances, authentic food and other items from diverse cultures of India.
Kennebecasis Valley Cricket Club (KVCC) was formulated in New Brunswick in 2018. Amit is also primarily responsible for its registration as a Not-for-Profit organization. He also secured additional government funding and has to date generated KVCC income of $10,080 through sponsorships, donations, memberships and special projects funding. His achievements for the KV Cricket Club have been just as outstanding as those which he had registered during his association with Saint John Cricket Club.
Under Amit’s Presidential guidance KVCC also successfully launched its Mother and Daughter Cricket initiative with assistance from Cricket Canada (https://kvcricket.com/mandd). Other programs that are run by KVCC include school kids, tennis cricket as well as annual Camps.
Amit Tamrakar’s outstanding Presidential leadership has since resulted in KVCC having received extensive social media coverage via its Website, Facebook, LinkedIn page and on several New Brunswick Radio Programmes. Amit is also currently at the helm of the KVCC’s initiative to secure a home ground location. Possibilities are being explored at three different locations.
Amit Tamrakar’s preceding profile should serve as a reflection of an individual who has continued to provide outstanding services of the highest order through both his professional
and volunteer activities.
Geared as they have been largely towards the further development of New Brunswick and Canadian Cricket. Amit’s volunteer activities are worthy of both the highest praise from members of the Canadian Cricket Community and of their emulation as an outstanding example to follow!