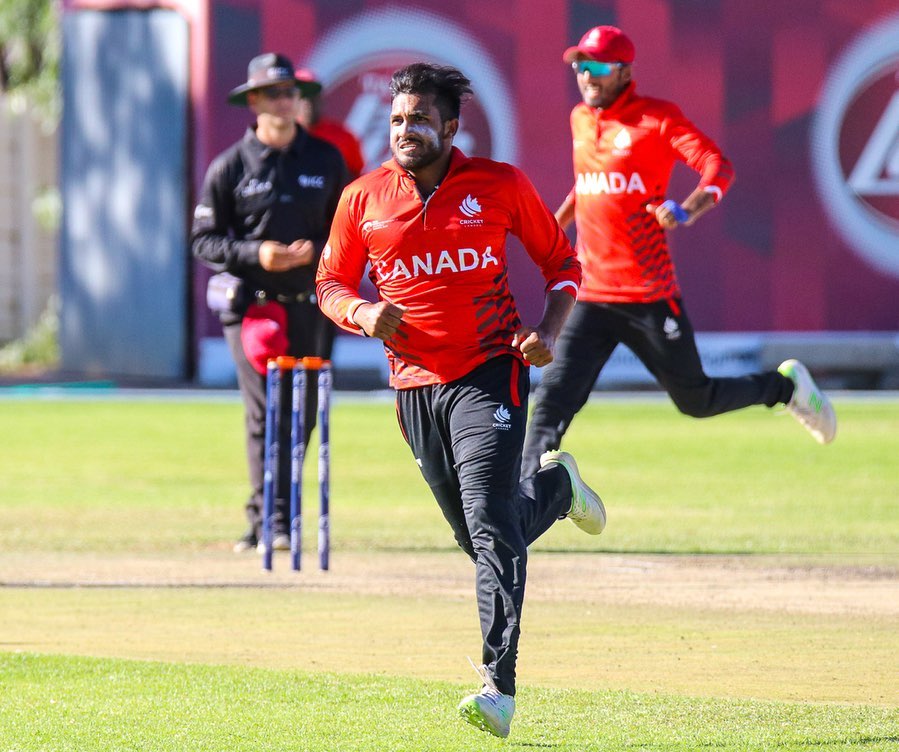 When Nikhil Dutta captured the prize wicket of host country Namibia’s Gerhard Erasmus for Canada during their 2018 ICC Division 2 Championship clash he set off on a celebratory run that attracted world wide attention because of its similarity to the customary wicket taking celebrations of South Africa’s Imran Tahir. For his part, Dutta has since self-consciously described that celebratory run as his most embarrassing moment in an otherwise outstanding Canadian cricket career for which he has deservedly become known as Canada’s mystery spinner!
Nikhil Dutta’s interest in cricket was first developed between the ages of 7-8. His earliest memories of being actively involved in cricket are of playing with his father in their family home’s hallway and living room. No doubt to the consternation of the family matriarch, his mother.
From there the natural next step was Nikhil’s enrolment in his first-ever Academy as a means towards helping his game grow further. Nikhil credits his father as being the biggest influence on his development, throughout those early years, “he got me into the game and the techniques and knowledge that he passed onto me really helped my game to grow! He also took me to practice every day after school. We would either be doing throw downs or spot bowling just to continue to develop my game! I am still currently utilizing some of the drills he initially thought me at the Soff Academy!”
Wisely, towards the further development of his career, Nikhil also looked to already famous and well established international cricketers as sources of worthy admiration and emulation. Not surprisingly the Indian Premier League famous Trinidadian and West Indian mystery off-spinner Sunil Narine, readily emerged as a primary target for Nikhil’s admiration. “Just because his bowling is so very different to that of others and I find his demeanour to be absolutely amazing. He doesn’t get fazed by any situation he finds himself in, which for T20 cricket is a very tough art to master!”
Nikhil also readily admits, however, to his admiration for Afghanistan’s Rashid Khan, who he credits as having changed the way spinners should be bowling in contemporary cricket. With regards to batting, Nikhil has also enjoyed the exploits of Jaques Kallis , Virat Kohli and Chris Gayle as being foremost among those who have successfully imposed their own respective identities and personas on the cricket field through their unique styles of batsmanship!
As is indicated on the rather impressive chronological timeline to the development of his cricket career, Nikhil Dutta first played his schoolboy/junior cricket at the Ontario Cricket Academy, which was the first club I joined and represented. From those early beginnings, his career has since evolved in a manner which has allowed him to become
more mature, with an ever-increasing fundamental understanding as to the exact nature of his own game. Towards that end the continuous evening practices he did

with his father, along with his growing appreciation of the need to be different from other cricketers really helped. Nikhil now believes that as a cricketer you should always try different things as no one actually knows what really works for them except through the process of repeated trial and error. Once discovered, however, their special talent(s) can really provide an extra edge to their own personal game.
It was only after he’d been called to the national Tryouts at King City that Nikhil first began to seriously harbour thoughts of actually playing for Canada someday; although he would suggest that it should naturally be every Canadian cricketer’s fundamental ambition. “It’s a totally different feeling though when you actually step on the field for the first time knowing you are representing your country!”
For Nikhil Dutta, that “totally different feeling” was actually first experienced on March 11, 2013 in Dubai, when he made his List A debut for Canada in a losing ICC World Cricket League Championship match against Kenya. Dutta did not get a chance to bat when Canada took first strike and only bowled 6 wicket less overs for 30 runs during his team’s turn at fielding.
Since that somewhat inauspicious beginning, Nikhil Dutta has gone on to record many outstanding achievements as “Canada’s Mystery Spinner!” Of these arguably his best performance to date in Canadian colours was his 3-11 (3.4 overs) that piloted Canada to a resounding 8 wicket victory over Oman during the ICC 2018 Division 2 Championships that were being played in Namibia.
He now also rates having played at the U19 World Cup and defeating Ireland as a Test playing nation during the most recent T20 Qualifiers as his most memorable cricketing moments thus far. He firmly believes though that his own my proudest moment for Canada is still yet to come. He also remains hopeful that someday very soon Team Canada will actually demonstrate to the entire cricket world what is really made of.
In that regard, Nikhil views the far too many disappointments that Team Canada has endured within the past two years as having been more of a, albeit painful, learning curve. Of those, the one which really hurt the most was Canada’s match against Nepal in the ICC 2018Div 2 Championship, which had they won would have resulted in the re-establishment of official ODI status. He however insists that as a team Canada still learned very valuable lessons from that situation and eventual outcome. He also remains convinced that Canada’s dream of regaining ICC ODI status is not that far away from being achieved.
Blessed as he is with a readily obvious abundance of talent, Nikhil Dutta has never really had cause to ever doubt his own abilities or question his immediate personal future as a Canadian cricketer? He does, however, acknowledge that as a cricketer doubts will inevitably exist and do occasionally creep into your head at times! “Whether it is before a game or at the start of a crucial bowling spell, there is always some level of doubt in your head! Such doubts can be quickly erased by the knowledge you have put in the hard yards which on previous occasions have actually.

seen you through and that you have prepared yourself to the best of your abilities for the situations that are being presented to you. The more we practice as individuals the easier a time we will have at overcoming such doubts since we would have already had the same experience at practice and can readily identify and utilize the options that can best overcome the particular challenge that is being presented!”
To date, the biggest challenge that Nikhil has had to face in his developing career as a Canadian national cricketer and one which has unfortunately been ongoing, has been the relative lack of match playing opportunities. With the Canadian cricket season effectively lasting only 4-5 months plus whatever international tours may become available, actual playing opportunities for Canada’s elite cricketers are by comparison to those of their counterparts in other countries, relatively few. Nikhil’s method of resolving the disparity has been to engage himself as much as possible in smart practices, which involve putting himself in situations that he knows he will likely encounter during actual matches.
Now like all others facing the threat of an even further abbreviated 2020 Season, as a direct result of the ongoing COVID19 crisis, Nikhil Dutta has resorted to the basics. “ During this tough time, it’s important to try and be active if that means going for a run since the weather is better or doing home workouts and even climbing stairs. Any activity which makes your body move and sweat a bit will help during this situation!”
Now still only 25 years of age and with hopefully many more productive and injury-free cricket years ahead of him before he even begins to contemplate retirement, Nikhil Dutta hopes to be able to continue playing for Canada for as long as he possibly can. However long that turns out to be, he hopes that it will also be definitely punctuated by an appearance as a Team Canada player at an ICC World Cup! “Other than that my primary objective would be to become the best cricketer I believe I can be. That would be my ultimate goal.”
As Canada’s mystery spinner we have absolutely no reason to doubt that Nihkil Dutta will indeed achieve both his Team Canada ICC World Cup appearance goal as well as his objective of becoming his very best as a Canadian cricketer.
WICK
ETS