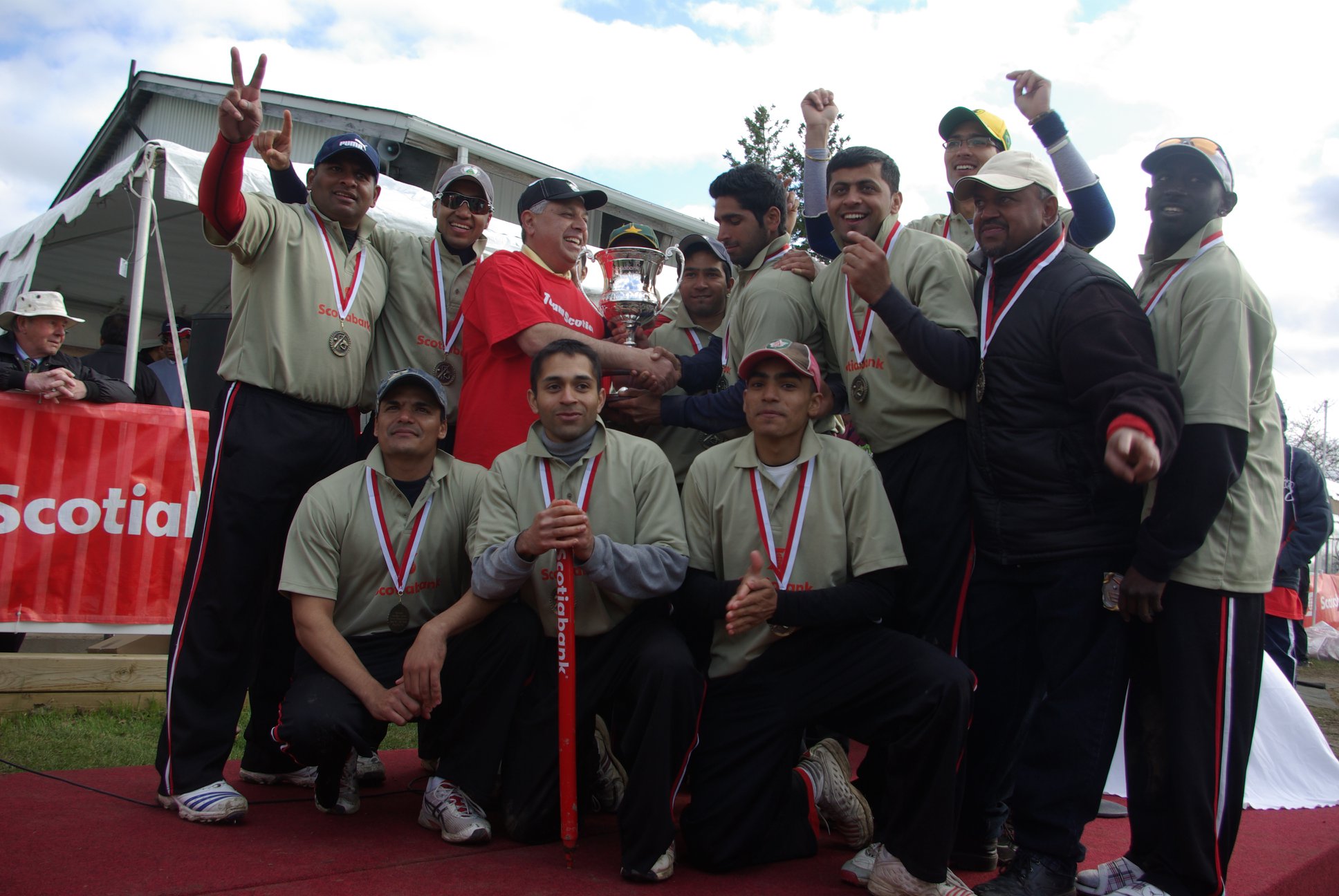 The Victoria Day weekend in 2008 saw what proved to be the only Scotiabank National T20 Championship and the first tournament under the banner of Cricket Canada. It followed a 2005 T20, which proved to be the first and last under the banner of the Canadian Cricket Association.
The next National T20 was staged in 2012 and returned in 2013 with both events under the
By Eddie Norfolksponsorship banner of CIBC. Those two events were based on a five region concept of Canadian cricket, potentially with a regional development coach in each region. The 2012 and 2013 National championships included both T20 and 50-over competitions.
A Demanding Schedule
The 2008 Scotiabank T20 tournament had a demanding schedule. Two groups of four provincial representative teams set to play a round-robin format on the Saturday at Maple Leaf Cricket Club, King City, Ontario. The eight provincial teams included two Ontario squads plus representative teams from Alberta, British Columbia, Manitoba, Nova Scotia, Quebec and Saskatchewan. All eight teams would then play in the Quarter finals on the Sunday morning with semi-finals and the final to follow as the day progressed. Holiday Monday was to feature the lower ranking provincial teams competing in a Development League competition, which would have begun on the Sunday afternoon. Players from the upper echelons were to be selected for to play in two All-Star games on the Monday. Overall, a showcase from which talent and potential could emerge. A potential starting point for a Canada-wide cricket development programme that might, one day, embrace women and girls.
Saturday’s Round-Robin Phase
All three rounds of four matches were completed on the Saturday for the two groups of four teams. British Columbia ended the day at the top of Group A with 3 wins. Ontario B was second thanks to 2 wins and 1 defeat, Alberta managed 1 win and 2 defeats while Nova Scotia footed the group with 3 defeats. Group B was headed by Quebec and Ontario A, who each won 2 and lost 1 match. Manitoba won 1 and lost 2, leaving Saskatchewan at the foot of the table with 3 losses.
There were challenges for several teams as the games were played on a prepared natural turf wicket rather than an artificial surface and it was early in the outdoor cricket season for several, if not most, of the players.
Group A Results and Scores (as available)
Nova Scotia 64 (19.4 overs, Amit Joshi 43) lost to Alberta 67/0 (9.3 overs, Zulfiqar Hussain 42*) by 10 wickets; Ontario B lost to British Columbia by ? wickets (Manoj David 2/24 and 32 runs for BC); Alberta 97/8 (20 ov) lost to British Columbia 98/1 (16.5 ov, Geoff Barnett 53*) by 9 wickets; Ontario B 168/5 (20 ov, Chris Manohar 43*) beat Nova Scotia 80/6 (20 ov) by 88 runs; British Columbia 143/2 (20 ov, Manoj David 59, Geoff Barnett 56*) beat Nova Scotia 115/5 (20 ov) by 28 runs; Ontario B beat Alberta by 76 runs
Group B Results and Scores (as available)
Manitoba 65 (? overs) lost to Ontario A 66/2 (14.5 overs, Aftab Shamsudeen 23) by 8 wickets; Quebec 153/4 (15 ov, Abdul Jabbar Chaudrey 83) beat Saskatchewan 83/4 (15 ov) by 71 runs; Saskatchewan 74 (15.5 ov, Qamah Zahar 4/18) lost to Manitoba 75/5 (16.1 ov, Suresh Jayaraman 28) by 5 wickets; Quebec 71 (18.4 ov, Harvir Baidwan 2/5) lost to Ontario A 72/1 (15.5 ov, Asif Mulla 36*, Trevin Bastiampillai 31*) by 9 wickets; Ontario A beat Saskatchewan by 9 wickets; Quebec beat Manitoba by 7 wickets (Quebec’s Ashish Patel took 4/14
Sunday saw rain and some included stop-start phases in two quarter-final matches before the rain killed off the prospect of any further play. It seemed surprising play had resumed in two quarter finals, but there was probably a realization of more unfavorable weather in the forecast and a need to complete the core tournament.
Quarter Finals In The Rain
Sunday’s quarter-finals took the biscuit as play resumed after stoppages in two of the quarter games despite “continuing rain!” Ontario A beat Nova Scotia, who completed 5 overs batting second. Ritchie Karpoor struck 54* for Ontario A, Abdool Samad made 26 and Umar Bhatti chipped in with 26.
Zulfiqar Hussain lead with 40 runs and A. Gupta made 27 in Alberta’s 125/5 (20 overs) against Quebec which scored 22 from 2.5 overs before rain halted play. When play resumed, Abdul Jabbar went on to reach 42* of a winning score of 87/1 from 12 overs.
Tanzil Rehman took 3 wickets for 8 runs as Saskatchewan struggled to 63/8 from 20 overs against British Columbia. B.C. made a slow start in wet conditions scoring 2 runs for the loss of 1 wicket from 1.5 overs and that seems to have been the end of the game.
Manitoba made 61 all out from 18 overs, Joe Lovelace scoring 13 runs, in a no result against Ontario B. Mohsin Mulla bagged 3 wickets for 8 runs for Ontario B while Eion Katchay grabbed 3 for 11.
Holiday Monday Championship Day
It came as no surprise that play was delayed on the Monday’s Victoria Day. The Maple Leaf Cricket Club fields were very wet when leaving on the Sunday and the weather had not transformed into a heat wave to dry up the excess water on the Monday morning.
The two semi-finals were reduced to 5-overs per innings. Quebec’s 41 for 5 wickets proved just enough as British Columbia fell short with 37/8 from 5 overs. Ontario A scored just 28.8 from 5 overs and lost to Ontario B who won by 4 wickets, thanks to reaching 29/6.
Ontario B became the first and, as it has turned out, only winners of the Scotiabank National T20 cricket championship. Ontario B struck 120/6 from 20 overs with useful contributions by Sanjay Thuraisingham (36), Zubin Surkari (20), Sohman Anjuria (17) and Eion Katchay (15*).
Some closing speeches and presentations followed the championship game. CBC provided some pre-tournament coverage and reported on the games, as did ATN (Asian Television Network) and the Rogers Community channel televised some of the games, including the Final. The tournament also gained publicity in the mainstream and ethnic print media.

Mihir Patel: One To Watch!