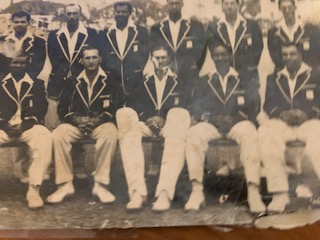 That proved a mountain too high for England who were all out
for 170. Batting a second time the West Indies, on the back of
Weekes’ unbeaten 90, reached 209-6 before declaring to leave
England with an unlikely victory target of 456. They managed
to get only 316 of those and lost by 140 runs!
The West Indies also won the Barbados 2nd Test which Weekes
missed due to injury. BG was then the venue for the next Test
Match, the 3rd, which England absolutely had to win in order
to keep the Series alive.
Led by their captain Len Hutton’s masterful 169, England’s victory
quest got off to a massive start as the tourists, batting first,
scored 435. In reply the West Indies lost early wickets and were
struggling at 12-3. Worrell (0), Stollmeyer (2) and Walcott (4) all
fell cheaply to Brian Statham’s swing, which was was proving
to be a handful. Having come to the crease, Everton responded
almost immediately with repeated front foot drives straight
past the astonished Statham to the North fence boundary for
fours. Weeks found a useful partner in Robert Christiani, who
playing on his home ground contributed 25, as the two added
52 for the fourth wicket.
At 94, playing forward to Tony Lock, Weekes was given out
bowled. The spectators who were seated in the “Rails stand
next to the scoreboard and just beyond Bourda’s very close
square-leg boundary were, however certain that England’s
wicket-keeper Godfrey Evans had in fact nudged off the bails.
Weekes’ controversial dismissal prevented him from reaching
what seemed to be a certain century.
Local boy Cliff McWatt and JK Holt both showed a great deal
of fight by adding 99 for the eight wicket before McWatt
was run out for a well played 54 to end the West Indies
resistance. The Guyanese crowd, already angered by Weekes’
earlier controversial dismissal expressed their displeasure by
throwing bottles onto the field, for the first time ever in Test
cricket’s history.
Play did resume and West Indies were eventually dismissed for
251 with Holt left not out on 48. Asked to follow on West Indies
were dismissed for 256 in its second innings with Weekes
scoring just 38. Left with a target of only 72 England posted to
comfortably secure the required victory by 9 wickets. Weekes
did not stop making runs in the series however, as in the Port of-
Spain 4th Test he scored 206 in the West Indies massive 1st
Innings total of 681.
The third and final time I saw Everton Weekes bat was during
the Bourda Test of the West Indies-Australia 1955 Series.
Australia’s very strong, heavy scoring team easily won the
Series 3-0. Walcott was the West Indies stand out batsman,
registering a mammoth series aggregate of 827 runs at a 82.70
average. Weekes was the next best, scoring 469 runs at an ave
of 56.62.
During the Bourda 3rd Test, Weekes scored 81 out of a paltry
West Indies total of 182. Wickets were falling continuously
around him, Holt (12), Stollmeyer (16),Walcott (8),Worrell (5),
Sobers (12) and Atkinson (13) all going cheaply. Weekes by
contrast seemed to be ever so comfortable against the very
strong Australia bowling attack of raw pace and good spin.
When he eventually fell, caught by Archer off Ritchie Benaud’s
bowling for a well-played 81, the entire Bourda
crowd stood and cheered him all the way back to
the pavilion.
It wasn’t until 1968 however, that I finally had
the honor of meeting Everton Weekes in person.
That was in Trinidad during the 1968 West Indies-
England Test Series, for which Weekes had been
appointed as the West Indies Team Manager. I was
sitting with Clive Lloyd and Steve Camacho at the
Normandie Hotel restaurant and as he came up
to our table, Clive introduced us formally to each
other. When Everton found out that I had in fact
come to Trinidad specifically for the Test, he offered
me tickets for the entire match, as well as a ride to
the Oval each and every morning.
My next opportunity to get to know him further
was during the Barbados hosted 2nd Test of the
West Indies-Australia 1973 Series. I was invited to
the President’s Box for lunch on Days 2 and 5 of
the Test. I spent much of the time there delightfully
chatting cricket with the great man.
While I was living in Barbados from 1980 onwards,
myself and Tony Cozier did CBC radio commentaries
with Sir Everton for over two years. I was able to
invite him to my humble Rockley flat and he in turn
had me over several times for lunches and dinners
at his Atlantic Shores home on the beach. When
I eventually moved to St Lucia to head the newly
created OECS Sports Desk, I stayed in touch with
over the years by phone during his later days and
in person on my fairly frequent visits to Barbados.
Precious memories of actually seeing him bat and
of our personal interactions that will now with his
passing be ever fondly cherished. Rest In Peace Sir
Everton. Thanks for the memories.