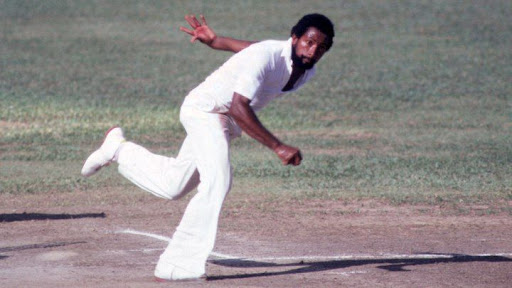 The first Test of the West Indies-India 1983
Caribbean Series which was set to be
played in Jamaica from February 23-28,
was actually the start of a very long 11 match
back campaign between the two ICC Members.
Immediately following the five Tests in the Caribbean
the West Indies were scheduled to pay
India a return visit for a six match Series that
would start in mind-October and run until mid-December.
The Sabina Test started with low first innings scored being recorded
by both teams after Lloyd upon winning the toss had sent the Indians
into the bat. It was actually the first time in ten Tests that Lloyd as West
Indies captain had abandoned his customary practice of batting first
having won the toss.
Early breakthroughs by the West Indies formidable pace quartet of
Roberts, Holding, Garner and Marshall, had the sub- continent boys
reeling at 127 for 7 before Balvinder Sandhu hit a bold 68 to help India
reach a far more respectable 251 all out. Roberts captured 4 for 61,
while Marshall 2/35, Garner 2/41 and Holding 2/57 shared the remaining
six wickets equally.
The West Indies response was not much better. Greenidge held the innings
together with a well paced 70, but there were no other scores of
note as the West Indies were dismissed for 254. Bowling for India Ravi
Shastri 4/43 and Kapil Dev 4/45 were the main wicket-takers.
The West Indies were dismissed just before close of play at the end of
the third day. India at the close of play were 81-3, having lost Gavaskar,
dramatically bowled by Holding for 0 off the very first ball of their
second innings
Heavy overnight rain then turned Sabina Park into a virtual lake, resulting
in the complete loss of the entire fourth day’s play without a ball
being bowled.
At tea on the fifth and final day India, had progressed to 112-4 with
Kapil Dev and Syed Kirmani on 12 and 10 not out respectively. At that
stage a draw seemed very much on the cards and that was certainly
the consensus among all of the commentators within the Press Corps.
There was however high drama immediately following the resumption
of play after tea. Andy Roberts almost single-handedly completely
transformed the entire afternoon and the remainder
of play that followed with one of the
most destructive spells of high class hostile fast
bowling the Caribbean has ever seen. The Antiguan
captured 4 for 1 as the Indian lower-order
was decimated, losing its remaining six wickets
for only 62 runs to be bowled out for 174. Roberts
ended with figures of 5 for 39 and an overall
match tally of 9-102.
India’s second innings dismissal for 274, left the
West Indies with a victory target of 172 in the 23
overs that were still remaining in the day’s play.
In contemporary parlance that would have
been a white ball, limited overs, cricket target of
less than seven and a half runs per over. Very
gettable at just over a run a ball.
The word from the West Indies dressing room
was that the chase would definitely be on. Out in
the middle however, that did not seem to be so,
as Greenidge and Haynes were both struggling
to find the boundaries. A message from Lloyd Dev may therefore have done Lloyd a monumental favor, dismissing both openers as he did very soon after.

That let the Master Blaster Viv Richards in, providing him with the ideal opportunity to play a no holds barred blistering 61 off 36 balls which included five fours and four sixes and left the very small crowd present jumping in absolute joy.
The final mopping up rites were fittingly performed by local boy Jeff Dujon. He appropriately hit a six straight
into the Kingston Club Pavilion as the West Indies won by 4 wickets with just four balls to spare.
The last two hours of the match was of one of the greatest ever run chases in Test cricket’s illustrious history.
It was also certainly one of the most memorable Test Match experiences for me as a Commentator.
My only regret was that it was in fact witnessed by a very small Jamaican crowd. The Jamaica Cricket
Board, in the belief that a tame draw would have been the inevitable result following the completely rained
our fourth day, had only one gate open on the final day through which spectators could enter the ground.
The Jamaica Broadcasting Radio Commentators did justice to the drama that was enfolding prompting an
eventual post tea rush of spectators to Sabina.
The West Indies eventual, largely unexpected, victory was also somewhat of a surprise gift
to Clive Lloyd, leading the team as he was in his 50th Test as Captain! What a Way to celebrate
that was. Most Memorable indeed!