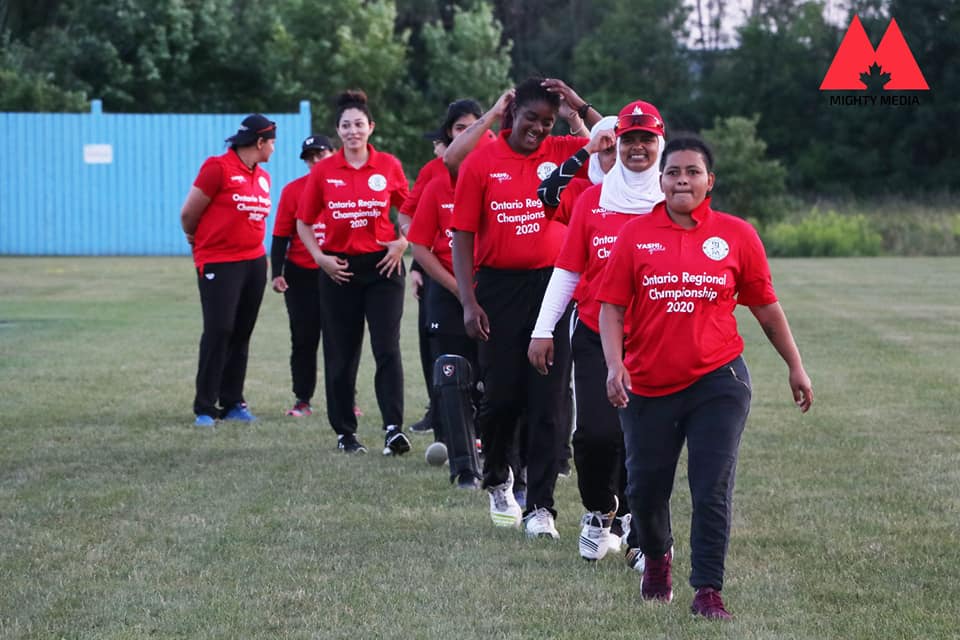 Cricket Canada’s Board of Directors has approved
the Terms of Reference and membership
of the Cricket Canada Women’s Committee,
to be chaired by Women’s Cricket Coordinator,
Durriya Shabbir. The approval was finalized during the
Board’s October 7, 2020 meeting.
THE COMMITTEE IS TASKED WITH:
- Developing, implementing and delivering programs
to encourage the participation of girls and women at
all levels;
- Providing advice and recommendations to the Board
on matters affecting girls and women’s participation;
- Preparing an annual plan and annual budget for
board approval;
- Establishing policies and procedures for women’s
cricket;
- Developing and implementing a plan for recruitment
and development of coaches, umpires, support staff
for the Women’s and U19 teams
THE COMMITTEE MEMBERS ARE:
Ave Mogan: Cricket Canada Hall of Fame inductee
(2014), is credited with establishing and being the
co-founder of organised women’s cricket in Toronto,
Canada. She was the first female at the age of 17 to
participate in the TDCA men’s League in various divisions
and skippered Canada’s first-ever national
women’s squad in 1996. She also lead the team in 2005
and 2007 and was vice-captain of the North American
women’s cricket team in 2003. In 2004, she was decorated
Best Women’s Cricket Coordinator in the International
Cricket Council (ICC) Americas Region and
led the Canadian Women’s cricket squad to their first
Americas Women’s Cricket title in 2007. Prior to moving
to Canada she was a member of the West Indies
Women’s squad from 1977 to 1979.
Sonali Chandok: Sonali moved to Canada from India
in 2016 and is based out of Surrey, BC. Her involvement
with cricket began as a player in 1985 representing her
state of Punjab, Guru Nanak University and North Zone
in India. She was employed by Indian Railways as a
sports person and served as a coach for the Mumbai Cricket
Association. Cricket BC appointed her as the coach for the
women’s program in 2019 and she has held that post since.
She plays for the West Vancouver Cricket Club (men’s) team
and was part of the Women’s squad during the practice tour
to Trinidad in 2019.
Jazz Tucker: Jazz was first introduced to cricket in 2001 after
she moved to Victoria, BC to attend law school. She joined the
Wicket Maidens in 2003/2004 and fell in love with the sport. Jazz
moved to St. John’s, NL in October 2004. 15 years later, thanks to
the phenomenal support of Cricket NL, her dream came true.
Jazz became the coordinator of the women’s programme
which commenced in June 2019 and she was appointed to
the Cricket NL board as the coordinator/director of women’s
programme in October 2019. On November 16, 2019 Jazz and 12
others became the founding members of the Salt.
Saima Rizwan: Based in Fort McMurray, Saima has been involved
with women’s cricket for the past 5 years as a player,
coach and administrator. Her Alberta Women’s Club provides
pre-season training, organises tournaments and is actively
involved in scouting and recruiting talent. Tremendously passionate
about the game, she has represented Alberta in the
Western Tournament in 2016 and 2017. She played a key role in
organising the Canada Day Cup in Ontario in 2018.

One On One With Saad Bin Zafar: CPL 2020 A Most Enlightening Experience!