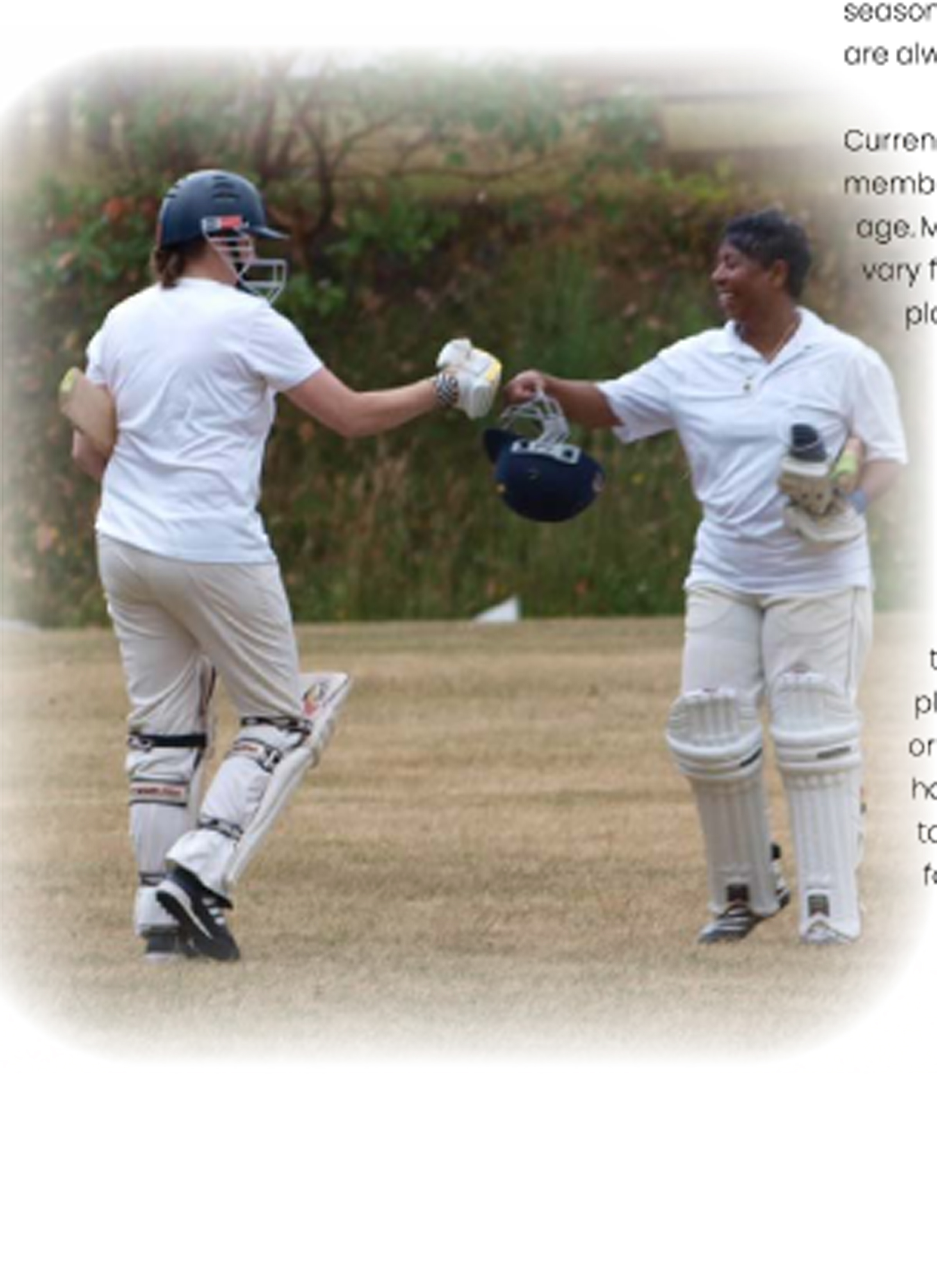 2020 marks the 20th Anniversary of Victoria’s most
longstanding women’s cricket club, the Wicket Maidens.
Cricket has a deep-rooted history on Vancouver Island,
particularly in Victoria. There is evidence of women’s
cricket being played on Vancouver Island as far back
as the nineteenth century and in the early part of the
twentieth century. If you visit the Beacon Hill pavilion,
arguably the epicentre of cricket in Victoria, there is a
photo of a Victoria women’s team from 1893. Despite
the formation of several women’s teams over the
years, there had not been a consistent women’s cricket
presence until the Wicket Maiden’s were formed.
The formation of the team was spearheaded by Lenore
Davis, Karen Stoppler and Judy Elsdon back in 2000
after several WAGS (wives and girlfriends) of Victoria
and District Cricket Association (VDCA) players decided they
would like to not just watch, but also play cricket. The Maidens
began by joining the VDCA mid-week league and have been
playing in this league ever since. Lenore Davis is still actively
involved with the team and is the current Club President – an
absolute asset to the club’s success and longevity.
Over the years the Wicket Maidens grew and attracted
more women to the sport of cricket – quickly fostering an
environment for high-level development.
In 2004, eight members of the Wicket Maidens were named to the Canadian
women’s national team and in subsequent years Wicket Maidens players
continued to be selected to play on the international stage.
In 2006 international matches between Canada and Bermuda were organized
and played at Beacon Hill Park. Eleven Wicket Maidens players were selected for this tournament, these players are shown and noted in
the photo.
In addition to the women that played against Bermuda, Jo
White and Mary Reddy also played international cricket for
Canada. In 2012 and 2013 Jo White and Kim Coulter went
on to play in matches in George Town and Dublin against
teams from countries including Argentina, Thailand,
Scotland, Japan and Ireland.
The Wicket Maiden’s philosophy focuses on working
together to expand each player’s skill sets, challenging
one another and other teams while having a great time
learning the sport of cricket. From these values an annual
women’s cricket festival was born.
In 2015 the Wicket Maidens hosted their inaugural women’s
cricket festival at the Cowichan Cricket Club. This festival
is open to all women cricketers and is a weekend to work
on skill development, play matches with other women and
most of all have a good time. This festival would not be
possible without the support of the Cowichan CC and the
VDCA who are strong supporters of women’s cricket in
Victoria. Among other awards, a ‘Spirit of Cricket’ award
is given annually at this festival to the player who best
embodies what it means to play the game with the right
attitude and ideals.
Over the years it became apparent that there was an
appetite for more game opportunities for women to play
competitive cricket with other women in Canada. Without
any existing tournaments established the players took
initiative themselves to create more opportunities to play.
Together with female Vancouver and Alberta club teams
the Wicket Maidens helped to organize the Women’s
Western Canadian Championship, first held in 2011. Since
then Wicket Maidens players have been consistently
participating as part of Team BC when the tournament
has been held.
In addition to festival weekend and the Western
Championships there are now more and more game
opportunities available thanks to the efforts of female
cricketers across Canada. The Maidens now participate
in Women’s Tournaments such as the Canada Day
Tournament organized and hosted by the Alberta
Women’s Cricket League. The club also works to coordinate
opportunities to play other women’s teams on a regular
basis – namely the Meraloma women in Vancouver. 2020
being an exception, typically the Maidens and Lomas will
face off on several weekends for a series of T20 matches.
The Maidens are always looking for more opportunities
for their members to play and support women’s cricket.
Continuing since the team’s inception, the Wicket
Maidens also still play weekly in the VDCA Midweek
League against the men’s teams during the summer
season. In the offseason the team practices indoors and
are always welcoming new and seasoned players to join.
Currently there are approximately 30 active club
members ranging in age from late teens to a “certain”
age. Member’s experience and backgrounds with cricket
vary from Canadians who think they have signed up to
play croquet to experienced ex-pats from cricket
playing countries. It doesn’t matter whether
players come to the club with experience or not,
all are welcome and will get an opportunity to
practice and play.
Despite the Covid-19 pandemic the 2020 season
was a success for the Wicket Maidens which saw
the team grow and lots of local opportunities to
play cricket safely thanks to excellent efforts and
organization from the VDCA. Unfortunately, festival
had to be cancelled this year, and a visit from a
touring NZ team – but that leaves more to look
forward to in the future!