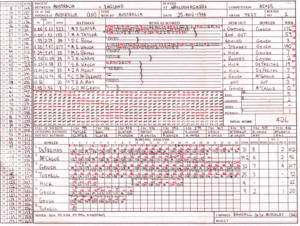 Part 1: THE FIRST STEPS
This manual has been written to help introduce new
scorers to basic methods of scoring and to answer some
of the questions most new scorers have. We hope that
anyone who reads this manual will then feel confident
to score for a day’s cricket and will know the answers
to some of the situations they might come across. It is
written in simple language without too much reference
to the Laws of Cricket but we have quoted the Law
numbers on occasions so that any scorer wishing to
learn more about scoring and the Laws of Cricket
can then refer to them. In scoring it is important to
learn to do the simple thing’s first and this manual will
hopefully help you do that.
A scorer has four duties which are laid down in
Law FOUR of the Laws of Cricket. These are:
1. Accept
The Scorer may on occasion believe a signal to be
incorrect but you must always accept and record the
Umpire signals as given. Remember you as Scorers are
part of a team of four and you must work together
with the Umpires.
2. Acknowledge
Clearly and promptly acknowledge all Umpires’
signals – if necessary wave a white card or paper if the
Umpires find it hard to see you. Confer with Umpires
about doubtful points at intervals.
3. Record
Always write neatly and clearly.
4. Check
Do this frequently as detailed later.
GETTING STARTED
Note: You should familiarise yourself with any local
rules which apply to matches played in your competition.
EQUIPMENT:
• Copy of local rules and the Laws of Cricket – 2000 Code.
• Scorebook.
• Pens (non-run in case your book gets wet).
• Clock, Pencils, Ruler, Rubber, Calculator.
• Clips (useful on windy days). Spare notepad for calculations.
• Umbrella (on some grounds you will not be undercover),
Chair.
HEADINGS:
Always write the details and the date of the game you are scoring for.
Sounds simple but a lot of people omit this information and it can lead
to endless problems later in a season if the scorebook falls apart!!
PLAYERS:
Write down a list of players of both sides before you start. Even better,
get the batting order if possible. Don’t write the full batting order
in your scorebook even if the Captain gives it to you – Captains are
notorious for changing their minds but at least if you have the list you
are familiar with their names.
BATSMAN FACING:
Find out which batsman is facing the first ball and write his name down
as Number 1 Bat. The next batsman is obviously Number 2 and you
can also write his name down in the space provided. Sometimes you will
not get a positive answer from the batsmen about who is going to face
– comments like “We’ll decide when we get out there” etc are common.
If so just work out which is which, and watch where they take guard.
BOWLER:
Ask for the name of the opening bowler and write his name in the space
for the first bowler and so on.
TIME:
When the game is about to commence the Umpire will wave to the
scorers and you should acknowledge by returning this wave and note
the time as the start of innings.
Good scorers will check the time with the Umpires before the game
starts and then everyone has the same time – if you don’t have official
Umpires, use your own watch.
Write the time for the start of the innings next to the first two batsmen
as being the time they both started to bat and the innings commenced.
As each new batsman goes in you should write their time in the space

Amol Bhatt The Name in Umpiring Activitis in Prairies Region