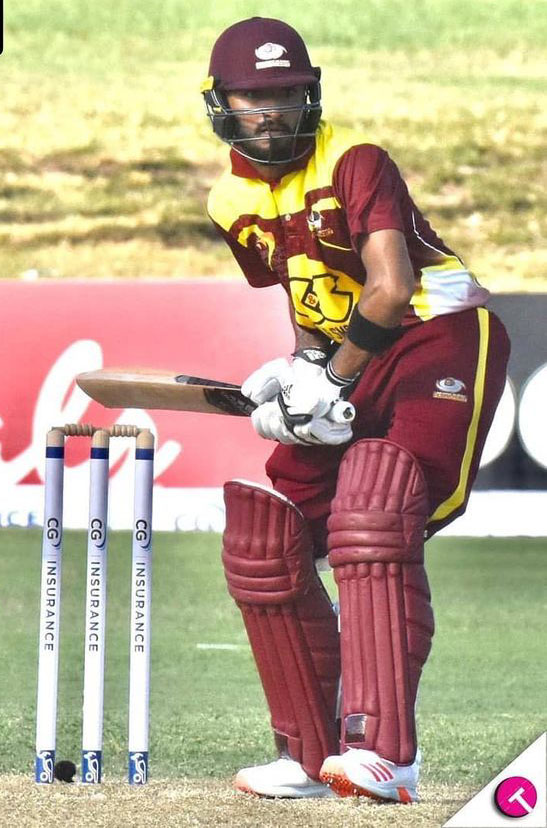 233 runs from 5 innings batted with a century (112) and a 52 and at an average of 46.60. Those were Nitish Kumar’s returns as a Leewards Hurricanes batsman at the conclusion of the Preliminary Round matches for this year’s 2021 CG Caribbean Regional Super50 Tournament. Returns which placed Kumar, the tournament’s only non-Caribbean born participant, squarely at the top of the Hurricanes batting and third in the overall standings.

Kumar’s 2021 CG Caribbean Super50 campaign commenced in the competition’s February 5 opening match which pitted tournament hosts the Leewards Hurricanes against their closest regional rivals, the Windwards Volcanoes. Kumar strode to the crease with the Hurricanes’ score on 94/3 off 17.2 overs in pursuit of the 285 run victory target that had been set by the Volcanoes. He proceeded to fashion an innings that was subsequently described during the post match presentation ceremony by the Volcanoes captain, West Indies One Day International player Sunil Ambris, as one of the very best he has ever seen in Caribbean regional limited overs cricket

Displaying his extensive repertoire of batting shots, Kumar stroked his way to a sublime 112, made off just 106 balls that included nine majestic fours and two imperial sixes. It was as the former West Indies fast bowling great Curtly Ambrose described, an innings of superb class and outstanding pedigree. It was, however, part of a losing cause as the Leewards Hurricanes were eventually dismissed for 253 off 47.2 overs 31 runs short of the required victory target.

In his second match, Kumar followed his superb opening match century with a solid 41, as the Leeward Hurricanes led by Keacy Carty’s superb unbeaten century and a belligerent Hayden Walsh Jnr cameo, secured a sensational four wicket final over win against the Barbados Pride. Carty, produced a memorable knock of 123 not out.

Chasing the daunting victory target of 302 to win at a required rate of 6 runs per over, the Hurricanes lost both its opening batsmen by the thirteenth over with only 62 runs on the board. Kumar and Carty, however, combined for a 98 run third wicket partnership which steadied the innings and provided a perfect platform for the match-winning fireworks that were to follow.

Having gracefully stroked his way to 41 off 48 balls with two fours, Kumar attempted an injudicious reverse sweep to an Ashley Nurse delivery, missed completely and was struck plumb in front to be correctly adjudged lbw. It was a most disappointing end to an innings that had promised much and which up until Kumar’s poor shot selection had even seemed headed toward a second successive century.

Kumar’s next two innings were his only failures of the Preliminary Round. Against the Guyana Amazon Warriors, he was seemingly caught in the no man’s land of indecision between attack and defense to a Gudakesh Moti first over delivery that seemed to stick somewhat mid-pitch. His resulting feeble aerial push offered the simplest of catches to extra-cover and he was gone having scored only six.

Kumar seemed to be back to his best in the Hurricanes’ next match, against the tournament favorites Trinidad Red Force. Having comfortably stroked his way to 21, he then however received one of the best balls of the entire tournament, a ripper from left arm spinner Khary Pierre which straightened sufficiently to brush Kumar’s outside edge for him to be very well caught behind by wicket-keeper Denesh Ramdin, indisputably the competition’s best gloveman.

Kumar’s final innings of the tournament’s preliminary round produced another excellent half century. His innings which had promised so much and which yet again seemed destined to becoming his second tournament century was, however, frustratingly cut short by his repeated injudicious attempt at another reverse sweep. The almost predictably disastrous result being a dolly of a catch to backward point.

Commenting on his overall 2021 CG Super50 experience Kumar said that he’d enjoyed his time just as much as in every other year.

“It’s been obviously a little different with it going back to the original format with the 6 teams. There has been no easy games with tough conditions at times, but I’ve thoroughly enjoyed it.”

Kumar also reported as to not having felt in any way under pressure to produce with the bat for the Hurricanes. He had turned up a little early for the Hurricanes pre-tournament training camp, fitted right in and was made to feel most welcomed by his teammates. After which his focus was only all about doing his role and helping the team in every way possible.

He also personally did not feel as though there was any added responsibility on him to consistently produce runs as one of the Hurricane’s top line batsmen.

“Obviously I would have liked to have big scores in every game, but that would have been tough. It was about me giving myself a chance and once I got set going big. I know I had a key role to play in the middle with a lot of spin being bowled.”

As a very good off spin bowler in his own right, Kumar was, however, unable to bowl at all during any of the Hurricanes’ Preliminary Round matches. This was the result of his having been injured in a Hurricanes’ warm up game leading up to the tournament. With a deep cut on the index finger of his bowling hand, he couldn’t bowl at all.

With his outstanding Leewards Hurricanes franchise topping returns as a batsman and having finished the Tournament’s Preliminary Round among the top five highest run getters, Nitish Kumar can now be very well satisfied with his 2021 CG Super50 performances. His only regret about his Tournament participation would now possibly be that his time spent in Antigua did not also afford him an opportunity to have chat about his cricket with some of the local West Indies legends, Sir Vivian Richards, Sir Andy Roberts and/or Sir Curtly Ambrose in particular.