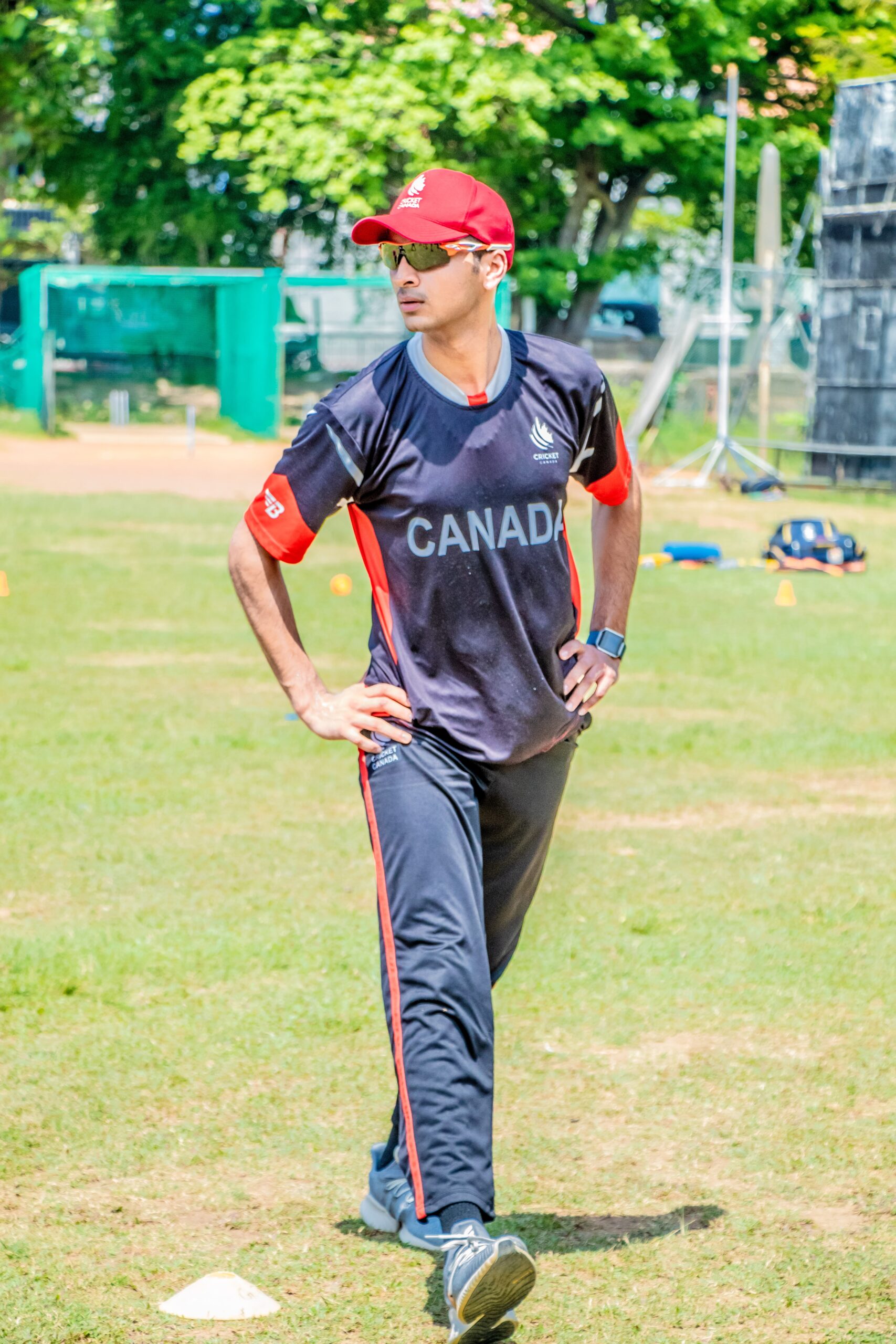 For Canadian cricket‘s promising now twenty-three
year-old allrounder, Harsh Thaker as a right hand
bat and right-arm off-break bowler, life has definitely
changed as a result of the COVID 19 pandemic.
Thaker’s last outing in National team colors signaled
his immense potential by virtue of an outstanding all-round
performance in Canada’s last match of the St
Kitts hosted 2019 Cricket West Indies Colonial Medical
Insurance Zone A Tournament. Playing against the
defending Tournament Champions, the Combined
Campuses & Colleges, Thaker scored a belligerent
67 ball 68 not out which included 6 boundaries and
2 lofty sixes. He also captured 3-28 with his off-spin to
help Canada claim their second match victory of the
Tournament.
During those now long distant past pre-Covid days,
Thaker used to practice or play cricket almost every
day. Routines that have since almost completely
stopped. Having so much free time has, however,
helped him to realize and appreciate that there are
things outside of his passion for cricket that he can
and should incorporate into his regular life. As simple
as it may be, going for walks with friends or family has
become quite a common practice which he now
readily enjoys. Harsh has also started to value that
much more all the little things in life which he had
perhaps taken for granted before the pandemic’s
onset. A mindset that will likely prove to be of
immense value once he gets back to actually
playing cricket, as it will undoubtedly help him to
truly love and enjoy every moment regardless of his
performance.
In terms of his cricket related activities during the past
seemingly never-ending months of COVID imposed
restrictions, Harsh’s focus has been mainly on his
fitness. Having read about a new fitness standard
that’s been adopted by both the International
Cricket Council (ICC) and the Board of Control
of Cricket in India (BCCI) which requires players
to complete a 2km run in 8 Mins and 30 seconds,
he’s been pushing himself to reach that level. It’s
become the motivator for him to go out and take
care of his fitness so that when the opportunity to
once again don Canadian National cricket team
colors does come, physically and mentally he will
be ready to do so.

Mentally, Harsh has also been doing a lot of
visualizations of how it would feel when he does go
out to play for Canada again. He tries to do this so
that he will be ready for the moment and not at
all surprised by it. He also does a few batting drills
and accompanied by his Dad he also goes to the
field to do some fielding routines. These are geared
towards helping him sight the ball better when
cricket does eventually start.

Nutrition-wise, Harsh has also been making a
concerted effort towards healthier meals choices,
as well as always trying to make sure that he doesn’t
actually, overeat. It’s been fairly hard for him to keep
track of his fitness during the Corona virus times as
a result of the lack of daily team practices that
would have occurred under normal circumstances.

Harsh’s adopted routines have, however, brought him to a stage where he now not only knows how his body
feels, but even more importantly helps him to fully understand exactly what he needs to do to make sure that he is as fully fit as he possibly can be. Towards that end, he also has an app that he follows for strength training which he completes about 5 times a week. This is on top of his running routines which he tries to do at least 2-3 times each week.

According to Harsh, Team Canada’s preparation for its upcoming tournaments
in the foreseeable future has obviously been very tough. The COVID
restrictions haven’t allowed him and his fellow teammates to do anything
collectively as a team for over a year.

By his recollection, the last time they had any team practices was in
September 2020 and before that back in March of the same year so
obviously, they haven’t had many sessions as a group. Some National
team players have, however, been able to avail themselves of individual
playing opportunities, including those that have been made available
stateside across the border.

In Harsh’s view that’s good for the team as a whole, as those
members will have benefited from having had actual match
playing opportunities when next they play for Canada. As
to when exactly that will be, no one is as yet entirely sure.
There was a period in Feb where things looked good and
everyone had hopes for a very busy cricket summer,
but that now seems somewhat unlikely.

The continuing uncertainty has been particularly tough
for Harsh to deal with, made even more so by the fact
that he has since begun working full time. Not knowing
exactly as to what his schedule as a National cricketer has, therefore, made Harsh’s 2021 activities planning a virtual
impossibility. Not surprisingly Harsh’s very wise reaction to the
uncertainty has been to try to stop thinking too far off into the
future. Instead, his much wiser adopted practice has been to
try to just stay fit and ready to go whenever the opportunity to
represent Canada does arise.

Despite his outstanding immediate past performance in Canadian
colors, Harsh Thaker now fully appreciates that his selection to future
national team is solely in the hands of the Selectors. The reality is however,
that there has been no further National team cricket since November
2019, to provide the Selectors with direct player performance evidence
to choose from. As such Harsh rightly feels that all he can do is to stay as
fit as possible and whenever there are some trials or even league games,
try to perform at the best of his abilities. He also suggests, however, that
the Selectors may have to pick from previous tours as there hasn’t been
not much to go off since. As justifiably confident as he is now therefore of
his chances for National team selection, Harsh’s energy is fully focused on
performing to the very best of his abilities for Canada when the opportunity
does eventually present itself. That he says is the only thing that will be in
his control.