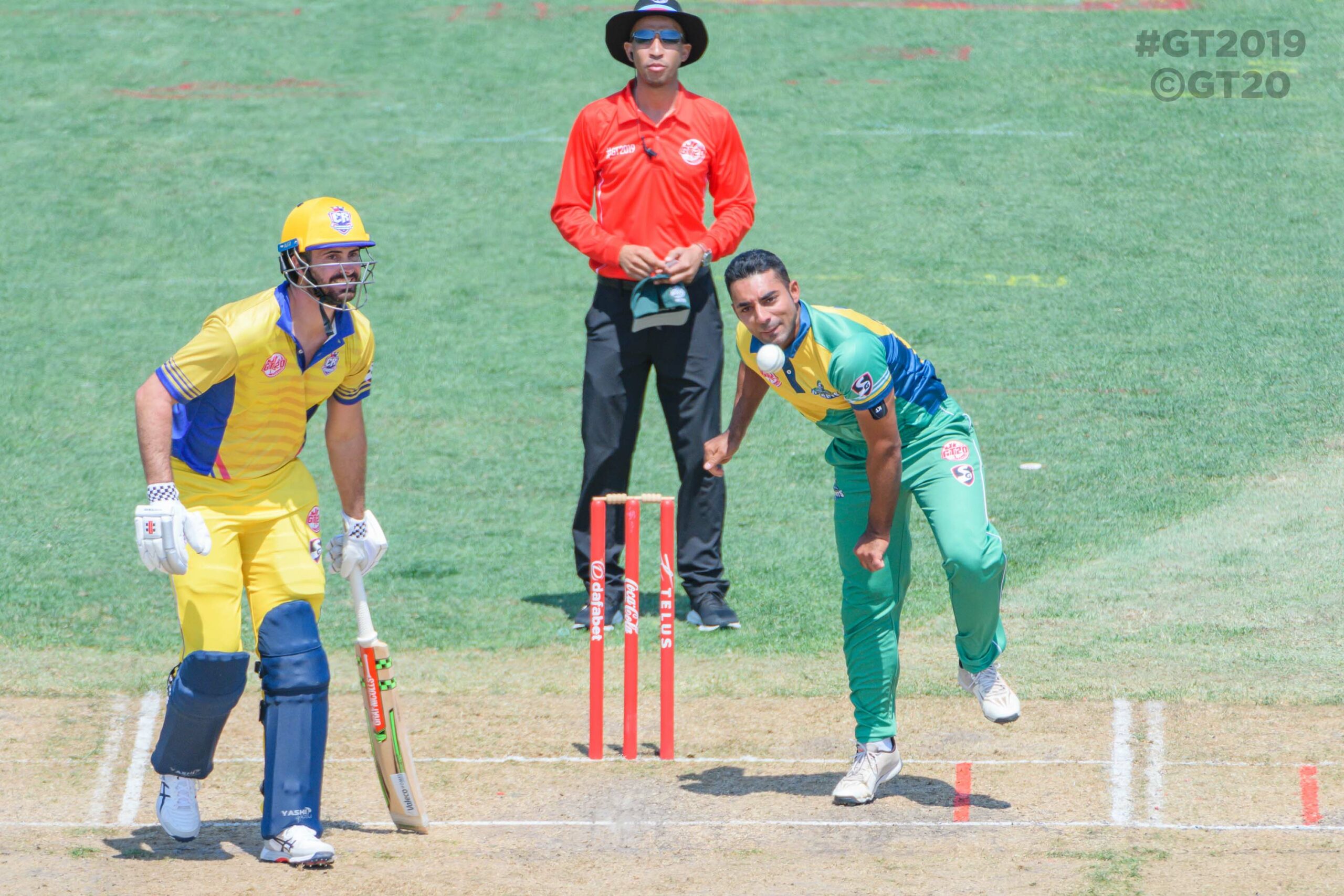 The extended, new variants inspired,
continuation of the COVID 19 Pandemic
with its associated restrictions has
resulted in significant changes to Canadian
cricket’s 2021 Events Calendar. Not only
here at home, but also further abroad as
well. As much is evidenced by the exclusion
of the 2021 GT20 Tournament which had
been scheduled to be held Malaysia from
June 24 – July 11.

Third-wave, new variants inspired, alarmingly
upwardly spiraling numbers of positive
COVID tests among Malaysians during the
month of April and continuing thru May,
prompted that country’s government to
lockdown its major cities. Developments
which in combination almost immediately spelled a death knell for the chances of this year’s much anticipated GT20 Tournament being held in Malaysia during its previously scheduled June – July time frame.

The Tournament’s June – July 2021 postponement
and the now prevailing uncertainty as to whether
it can actually be held at all this year, has come
as a yet another devastating COVID associated
disappointment for Canada’s top T20 cricketers.
Particularly those who under the Tournament’s
existing Canadian talent provisions, would have
been expecting to be included in the final squads of
the six participating franchises.

As members of the Canadian ODI squad also,
many among that same group of this country’s
elite cricketers would have already endured the
disappointment associated with the rescheduling of
the ICC Men’s CWC Challenge League which was
initially scheduled to be played in Canada this July.
That ICC World Cup Qualification Tournament has
since been moved to Malaysia and will be now held
during the October – November time period.

Although it is still listed on the Calendar as a scheduled
event, the exact dates for Canada’s scheduled
hosting of the ICC T20 World Cup America’s Qualifier,
which was also supposed to be held this July, is now
yet “to be determined!” According to the updated
calendar, Canada’s Men’s Senior Team will now likely
not be involved in any international matches until this
coming September at the earliest. The 2021 Auty Cup
which will feature a multi-format series of Canada-
USA matches will now be held in September over the
Labour Day Holiday long weekend.

It will also be much the same scenario for Canada’s
National Women’s and U19 players. The Women’s
first and only scheduled engagement in international
competition will be in mid-September. They will be
traveling across the border then to participate along
with the representative teams of Argentina, Brazil and
the USA as hosts in the ICC’s Americas Women’s T20
World Cup Qualifier.

For the U19’s their World Cup Qualifier, during which
they will be up against Argentina, Bermuda and the
USA as hosts will be held a month prior to the Women’s
from August 18-25. Canada’s U19 Team will be seeking
to again emerge as Tournament Champion, as only
the eventual winner will move forward to the actual
ICC U19 World Cup which is scheduled to be held in
the Caribbean in early 2022.

West Indies’ hosting of the ICC 2022 U19 World
Cup at three of its yet to be determined
member countries venues, will be the closest to
home for Canada that the global Tournament
has ever been held. There will, therefore, likely
be very affordable opportunities for the families
and friends of Canada’s selected U19 squad
members to travel to the Caribbean to attend
the matches and provide their live match day
support. As such Canada’s emergence as
winner of this year’s Qualification Tournament
has arguably never before been as crucial as it
will be this August.

With an eye towards the National Team’s U19
World Cup Qualification Tournament in August,
the respective teams for the August 23-27
Men’s National Championships could therefore
well be stacked with aspiring U19 players as
opposed to those of a more senior vintage.
The scheduled National Men’s championship
would provide a perfect platform opportunity
for Canada’s U19 players to fine-tune their skills
prior to heading stateside to participate in the
all-important World Cup Qualifiers.

In much the same manner, it is hoped that
although it will be of the longer 50 Over format the August
12-15 Ontario hosted Women’s Championships will still serve
as a practice opportunity for the National T20 players,
Deprived as they will be of any international competition
prior to the September 11-18 USA hosted ICC T20 Qualifiers,
Canada’s National Women Team’s cricketers will be seeking
to get all the practice they can in order to be at their very
best in the US.

A COVID affected 2021 events calendar for Canada’s
cricketers undoubtedly. Still one however that offers many
actual match playing opportunities for the country’s top
players to give of their very best. “Let the Games begin!” 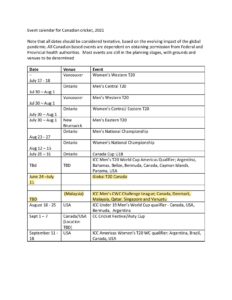