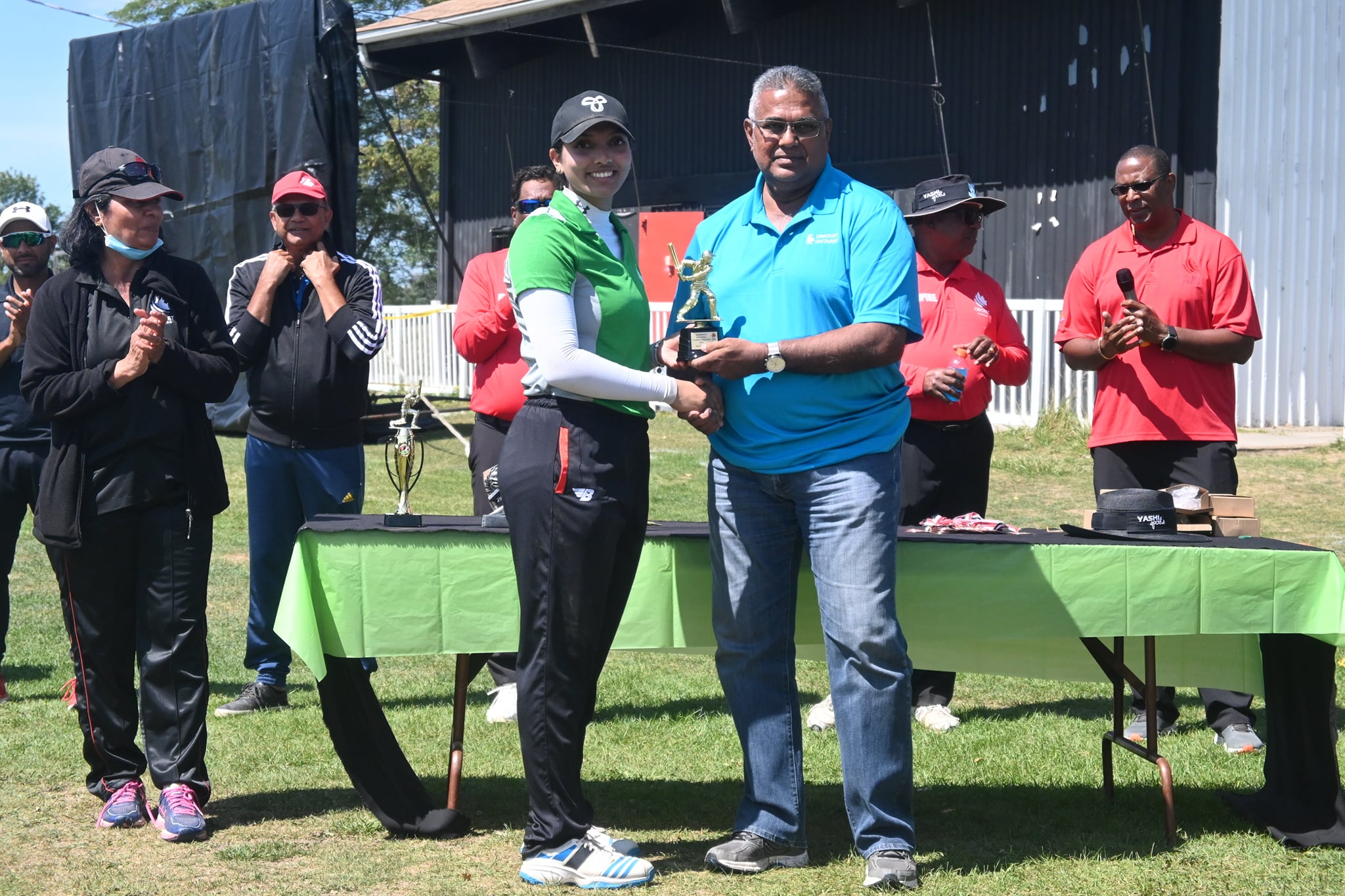 Miryam Khokhar, playing for the Maple Greens in the recent August
11-15, 2021 Canadian Women’s Championships played at King City’s
Maple leaf Cricket Club was adjudged the Tournament’s Most Valuable
Player. Khokhar’s tournament batting average was an outstanding 191
runs from four innings batted for an incredible 95.50 runs average. Her
recorded strike rate was 102.14
Khokhar began the Championships with an aggressive and defiant
innings of 51 not out, scored off of just 52 balls and including 7 fours. Her
innings was the backbone of the Maple Green’s insufficient 91/5, 20 overs
response to the 108/9 opening match victory target that had been set by
their Cedar Blues opponents. The deficit was just 17 runs as the Khokhar
led Greens started the Tournament with a loss.
Khokhar recorded her only batting failure for the entire Tournament during the Maple Greens’ second match, which
was against the Orange Oaks development Team. Khokhar was run out for 16 as the Greens fell for 92, agonizingly just
six runs short of the 98 run victory target they had been set for victory.
Khokhar’s third Tournament outing at bat was almost an exact repetition of the first. Her 51 ball 50 not out, including 4
fours, piloted the Maple Greens to a somewhat healthier 110/4 (20.00) overs in their second round match, against the
Orange Oaks Development Team. Unfortunately for Khokhar and her team that total again proved to be inadequate
and was easily overcome by their opponents.
Khokhar was even more aggressive in her third Tournament innings. Her 72 ball 74, including 9 fours was composed
at a strike rate of 102.78. It was again in vain however as the Greens lost their third straight Tournament match, their
return encounter with the Cedar Blues, by 75 runs.
Four innings batted, three undefeated half centuries and her only dismissal and failure via the run out route.
Appropriately and seemingly the only way all of the opposing bowlers se faced could actually get her out.
Miryam Khokhar’s cricket career was essentially started sometime in 2004, when she was only four years old. Initially
she was heavily inspired by her older brother who was either always in the nets with his coach or constantly playing
cricket with their dad in the family home’s basement. Not surprisingly cricket grew on Miryam.
Miryam started going to practices, playing and learning. At first it was hard for her as she was always the only girl in
the nets surrounded by much bigger boys. She was however really blessed to have had a coach like Derek Perera who
always treated her just like any of his other players and if anything worked with her even harder. Derek continues to
help Miryam grow not only as a cricketer but as a person as well.
Being a part of a club like Ontario Cricket Academy was relatively easy for Miryam to adjust to. It quickly became very
familiar to her with the appreciation that everyone there treats each other as family. For a while, Miryam was playing
Page: 6 wickets
to complete against the boys. She was never introduced to any other women who played, so she played in the TDCA League among the boys.
When Miryam was around the age of 11, the Toronto & District Cricket Association (TDCA) introduced a Women’s League for the very first time. In 2013, during a game against Tranzac, Mikaela Turik, the Canadian National team’s captain at the time, introduced Miryam to George Coordinton and asked her to start coming to the National practices that were being run. Miryam also started practicing along with the boys at the Provincial HP Sessions during 2014 and continued doing so until well into 2018!
In 2015 Miryam participated in Ontario Women’s first tour to Atlanta. A year later, in 2016, she toured England as a member of a joint North American team called CanAm, playing alongside Clare Taylor who had also played U19 cricket at Essex and Middlesex. In 2017 Miryam was invited to attend a Philadelphia hosted CanAm Cricket Camp where England’s national Women’s Team players Suzie Bates and Charlotte Edwards were part of the coaching staff. At the conclusion of the Camp, Miryam was recognized as its best batter!
During the 2017 summer, Miryam was also recognized as the leading run scorer for the Scarborough Women’ League. In 2018 she was one of the four Canadians selected to go to Trinidad to play in the Court Grand Slam Franchise Tournament. During the Tournament Miryam played for the Tecu Titans alongside West Indies professionals such as Brittney Cooper, Shakira Selman, Merissa Aguilera and Deandra Dottin.
Having emerged as the 2021 Canadian National Women’s Tournament’s MVP, Miryam Khokhar has been duly included in the squad that has been summoned to prepare for Canada’s participation in the upcoming America’s Qualifier for the 2022 ICC Women’s T20 World Cup. The Qualifier is scheduled to take place this coming October at a time and venue that are yet to be officially announced by the ICC. Page: