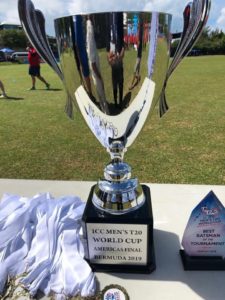 Played six, won five, one no result. That was Canada’s record at the conclusion of their sixth match in the Bermuda hosted ICC Men’s T20 World Cup Americas Region Final. The Canadians maintained their unblemished record thanks to a 15 run victory over the USA in the final match of the four team Tournament. The win also resulted in the Canadians being crowned champions of the one week, four team qualification tournament.

Batting first, having been sent in by the US, Canada posted 173/8 off its 20 overs. Rizwan Cheema and his new opening batsman partner Abraash Khan got the Canadians off to brezy start, posting 29 off just the first three overs. The loss of Cheema for 19 with the score on 29 set off a mini collapse for the Canadians, as two further wickets fell for the addition of only 15 runs. Khan was caught by Taylor off the bowling of Gore for 22 (22), to be quickly followed by the loss of Nitish Kumar for 0, after having faced just 3 balls.

Canada’s skipper Navneet Dhaliwal was again to his side’s rescue with a 30 ball 36. In partnership with Ravinderpal Singh 67 (33), Dhaliwal added 82 for the fourth wicket to restore some sense of order to the Canadian innings.

Set 174 for victory, the US were off to a flyer, some loose Canadian bowling allowing the score to race to 32 after just three overe before the first wicket fell. Opening for the US, Monank Patel hit a breezy 26 off just 15 balls with 3 sixes before he eventually fell to Saad Bin Zafar. There were also useful contributions from Jasdeep Singh 31 (24) Haydn Walsh (24) and Sunny Sohal 18 (18). Tighter Canadian bowling eventually put the screws on the USA’s batting progress, restricting the score to 158 at the end of the 20 overs, fifteen runs short of the victory target.

The Canadians unbeaten record placed them at the top of Tournament’s point standings. It also booked their passage, along with second place finishers hosts Bermuda, to the next round of Qualifiers which will be held in Dubai in October-November.