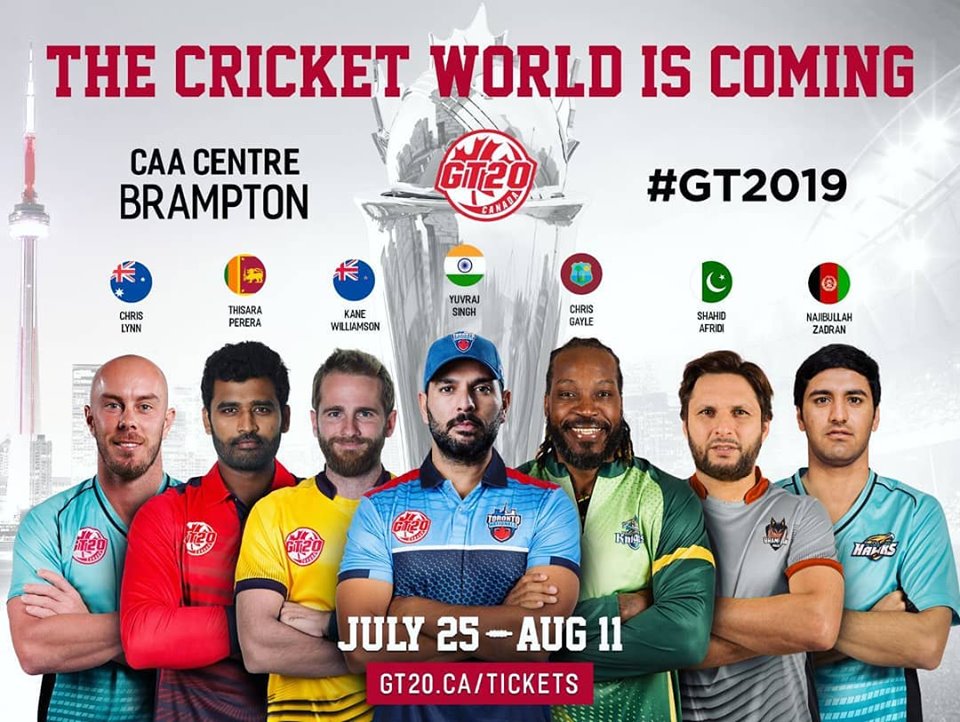 It’s now been almost two months since the August 11 2019 GT20 Final was held at Brampton’s CAA Center and as a good a time as any for me to make my analytical comments on this year’s Tournament. Having also just returned from witnessing live, three of the five Jamaica Tallawah’s Hero Caribbean Premier League home matches, compliments of Jamaica Tourism’s generous hospitality, my analysis may have benefited from the resulting comparison of the two tournament experiences.

Any analysis of that which was good about GT20 2019 must of course have as its starting point the increase in the number of Canadian players. The initial announced rosters of the six participating franchises: the debuting Brampton Wolves, eventual champions Edmonton Royals, Montreal Tigers, Toronto Nationals, Vancouver Knights and the Winnipeg Hawks each listed five Canadian players which was a significant numerical increase from last year’s numbers.

The fact quite a few of those who were listed weren’t eventually allowed any actual playing time, is in the grand overall scheme of things insignificant to the positive exposure that would have been created by their inclusion. Kudos then to all 30 of those who were initially selected. Further congrats to those who were not only awarded match appearances but also by their actual performances made both themselves and all of Canada very proud.

If the increased number of Canadian participants was the very best aspect of GT20 2019, the very close second good would have been the Tournament’s venue switch from 2018 in King City to far more conveniently accessible Brampton CAA Center for 2019. Swiching this year’s venue made attendances far more convenient as was reflected in the noticeably increased numbers at each of the matches, particularly during weekdays.

All the good that would have been created by the Brampton CAA Center having served as this year’s GT20 Tournament venue would have been severely if not completely undermined however, by the wholly inadequate parking arrangements for match attendees. Despite the availability of more than sufficient parking spaces, only the privileged VIP’s were allowed to actually park their vehicles at the Center. None VIP Parking Pass holders were required to park their vehicles at designated off site areas and to be shuttled by school buses to the matches. Needless to say, these arrangements were not that well received and may have contributed to the less than sold out match attendances.

The other minor irritant for match attendees that could definitely be labeled as “bad” was the none availability of any up to date information on the participating players. From one match to the next the final playing elevens of the participating Franchises were inevitable comprised of international players with whom the spectators were totally unfamiliar. The GT20 Organizers’ abject refusal to accept a proposal which had been submitted for the publication of a printed Souvenir Programme that would have profiled all of the participating players was therefore, definitely a most regrettable error on their part.

So too was the unacceptable size and location of the Tournament’s Media Center. Small enough to actually only accommodate 30 of the 200 Officially Accredited Media, it was abhorrently located partially behind the side screen on the side of the ground that was opposite to the player’s pavilion. That meant that only those who were seated in the first two or three rows within the Center were afforded full views of the actual playing area. The remainder were required to follow the action via the single television monitor, which on the opening day wasn’t working and on subsequent days was often turned on late.

The 2019 GT20 Organizers’ downright ugly Media Center size and location was by far one of the most noticeable shortcomings of this year’s Tournament. As bad as it was however, it was unfortunately triumphed in its ugliness by the Tournament’s embarrassingly substandard umpiring which ultimately affected many of the match outcomes, including the Final itself. As the television monitors clearly showed, the Edmonton Hawks Rayad Emrit should have been charged with an above the waist no ball and the Vancouver Knights Andre Russell should have been allowed a free hit in the Final’s very last over. Had that glaring umpiring error, which was just the very worst and most obvious of too many others that had occurred during the Tournament’s 22 matches, not occurred the match result might have been different with the Vancouver Knights being returned as far more deserving Champions than the eventual winners the Winnipeg Hawks.

In summation the 2019 GT20 Tournament was therefore not lacking in positive outcomes. There were however a few too many required areas of minor improvement as well as those that were totally unacceptable which will need to be addressed if and when the Tournament returns for its third year in 2020