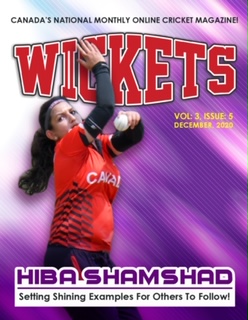 The last few, post-Christmas, days of December
are often a time of personal reflection on events
that have occurred during the year that has just
past. It is also the time when resolutions are made
and goals set for the forthcoming New Year. As
Wickets’ Publisher and with the benefit of the
experience having been directly responsible for its
publication in the now third year of its existence, I
can now readily identify the goals that should be
set for the magazine in the coming New Year.
Tony McWatt
– Publisher
First and foremost, at the very top of the list, would be the provision on a far more regular and consistent
basis of individual profiles and news articles from every area within Canada where cricket is being played.
When Wickets was first created three years ago, its primary objective was to serve as a publicity and
promotional vehicle for cricket throughout all of Canada. One of Wickets’ current shortcomings is its dearth
of consistently provided coverage of developments in each and every one of Canada’s cricket playing
provinces. As such, one of Wickets’ primary 20121 New Year’s objectives must now therefore be to address
and correct that anomaly by ensuring that its 2021 Issues are inclusive of pages chock full of coverage of
the latest developments in and/or recognizing the outstanding contributions of individuals from within all
cricket playing provinces, as well as their associated leagues and clubs.
In a similar manner, item two on the list would be the goal of ensuring that the countrywide circulation
of Wickets’ monthly Issues becomes so super-efficient as to ensure their receipt by almost every single
interested member of the Canadian cricket community! Every effort must be made to ensure that copies of
Wickets monthly Issues are circulated to all cricketers within their respective jurisdictions and by extension
to all those within their social circles who may be interested in reading the provided coverage.
The third essential 2021 goal for Wickets would be for its almost immediate acquisition of a solid core group
of corporate advertising sponsors for its monthly Issues. The revenues generated from such acquired
advertising sponsorships would be used to significantly increase its cadre of financially reimbursed writers.
Ideally even to the extent of having at least one paid Writer responsible for providing coverage from each
of the cricket playing provinces.
The achievement of each of foregoing listed goals as Wickets Publisher, will be topmost among my own
personal resolutions for the New Year. Hopefully the assistance and cooperation that will be needed for their
achievements will also be readily forthcoming.
Much to look forward to in the months ahead. In the interim, however, my very best wishes for a Merry
Christmas and a most prosperous New Year to all our Wickets Readers!
Note: The views expressed in Wickets monthly Issues Publisher’s Message are entirely those of the Writer.
They are not in any way intended to be interpreted as being officially representative of Cricket Canada!