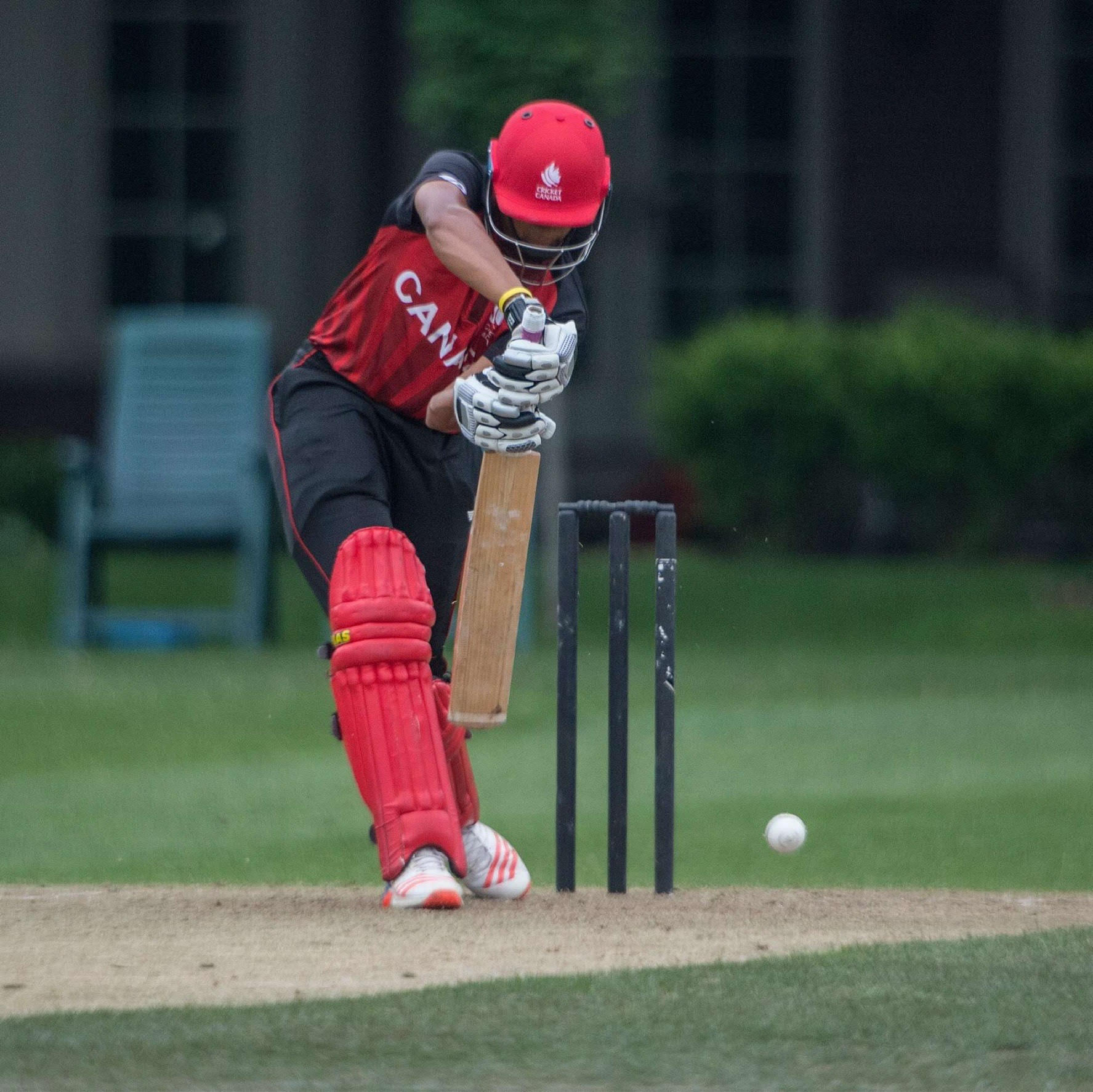 Now just two years after its historic occurrence, it shouldn’t be much of a surprise to anyone that Akash Gill still considers his century for Canada at the 2018 U19 World Cup to be the most cherished moment to date of his developing cricket career! What might be a bit more surprising is Akash’s admission of his absolute lack of awareness at the time of the historical significance of his accomplishment!
“I wasn’t aware that I was the first-ever Canadian player to complete the milestone of scoring an U19 World Cup hundred to be honest! I was told after the game in the post-match interview!”
Akash’s 120, scored against Papua New Guinea in Canada’s fifth match of the New Zealand hosted Tournament, capped a most memorable U19 World Cup for the then nineteen-year-old. During the Tournament Akash also scored two additional fifties while capturing 12 wickets with his right-arm medium-paced bowling.
Having emerged as Canada’s best player of the 2018 U19 World Cup, Akash Gill has since continued to rack up international honours as he further develops what is unquestionably already an outstanding cricket career. Now regularly plying his trade in New Zealand’s annual Domestic Cricket Season, he was most recently awarded as the New Zealand Central District 2020 Hawke Cup Player of the Year. Akash scored two hundreds and one fifty in only six innings batted to end with an impressive 78.50 average that secured the prestigious award.
Akash’s continuing meteoric rise, as an outstanding Canadian cricketer, has been a seemingly fated progression since he first became interested in cricket at the tender age of 6. Having been introduced to cricket by his Dad (Ken Gill) at that age, he now says that at the time he just wanted to be running around and being active, playing a bunch of different sports. At age 8 Akash, however, joined the Ontario Cricket Academy (OCA), the same Club he still currently plays for.
It was at the OCA that Akash was initially introduced to the Academy’s high-performance coaches, who taught him the basics of the game. That was the moment when Akash realized he had a passion for cricket and that he wanted to learn everything about it.
Akash naturally credits his Dad as having been the greatest influence on the development of his cricket interest during his formative years. He, however, also acknowledges that the exposure he had to the greats of that era and the legends who his Dad had watched during his own times growing up subsequently had a most positive effect on his own eventual affection for cricket!
“Watching highlights of the great batsmen and bowlers of those times had me amazed at how unique our sport is. I really fell in love with cricket!”

Buoyed by his newly discovered interest and armed with the rapidly developing skills he had acquired from the OCA’s coaches, Akash quickly became immersed in pursuing his passion for playing cricket. He played for the OCA at the U13 level and as a result of the Academy’s illustrious overseas placement Programme also benefitted from exposure to District cricket in Mohali Unjab at the U15, U16, and U17 levels. By the time he’d reached the age of 16, Akash had also toured with the U17 Canadian team to Bermuda that was part of Canada’s preparation for its participation in the 2016 ICC Bangladesh hosted U19 World Cup.
The 2016 Bangladesh World Cup was Akash’s first in Canadian colours. He recalls that he and Bhavindhu Adhetty were among the team’s youngest players. As such his primary objective during the Tournament was simply to use the exposure as a means of gaining as much knowledge and experience to work on for the following year’s scheduled World Cup in New Zealand. There as a returning player he would be expected to have much more of a senior role.
Akash readily acknowledges however that it should always be an honour and privilege to represent Canada at any stage! “We as players should always readily embrace the opportunity to perform on the international stage to prove that we are indeed high-class cricketers!”
Akash now also fondly views his dual U19 World Cup experience as having been of immense value to the further development of his cricket career.
“To rub shoulders and gain experience from other players at these tournaments has really been of great benefit to me. The experience has taught me to keep working and perfecting my craft. There’s also been the additional value of having made new friends with whom you are more than likely to run into again at some time down the line and along the road to the development of our respective cricket careers!”
Further, Akash acknowledges that his U19 World Cup experiences have also provided a solid foundation for his successful transformation into becoming a senior player. For him personally, personal growth has been a key factor after his time at the U19 level.
“You learn so much about yourself as a player and as a person from these Tournaments and I like to use that experience to pass it along to the next batch of players coming through the ranks. I really pride myself on having lent a hand to many emerging young cricketers, which is why I spent a lot of my time at the Canadian U19 trainings last summer as they were preparing for their qualification Tournament to get to this year’s World Cup in South Africa.
Akash has a message for the Canadian U19 Players who would have participated at this year’s U19 World Cup; especially those who as a result of their ages would now no longer qualify for further participation in such Tournaments. He suggests that they should not be merely satisfied with having participated at such a global level!

“It’s always an honour to put the Canada
jersey on and we should always be ever
grateful to have had the opportunity
to represent our country amongst the
best U19 players in the world. Let that
not be the end, however, but merely a
beginning. Continue to work hard and
to strive for greater things at the Men’s
international level. U19 cricket is just
the beginning of the transition into
international cricket, the greats of the
modern era who we see play for their
respective nations have all come from
those same Tournaments and have
continued to showcase their talents at
the next level!”
Akash’s post World Cup decision to
play in New Zealand at the Central
District and State level is a step towards
the fulfillment of his objective to secure
a First Class career as a Professional
Cricketer. His greatest ambition and
incessant dream has always been to
play Test cricket! “I have always been
fascinated by Test Match cricket and
would love to fulfil my goal of playing
at what I consider to be the toughest
format!”
Having said so Akash also acknowledges,
however, that the current modern
era is a time for Franchise cricket. As
such his secondary goal is to showcase
his obvious and prodigious skills on
a global level in Franchise Leagues
around the world.
WICK