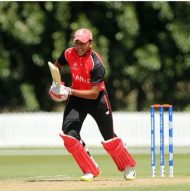 Canada took part in the 2018 ICC Under-19 Cricket World Cup, finishing in 11th position. They won two games in the competition, against Zimbabwe in the group stage and against Papua New Guinea in the play-off for 11th place.

The tournament was originally scheduled to take place in Kenya, but the International Cricket Council (ICC) moved it to New Zealand after an inspection in June 2009 found that it would be unrealistic to expect Kenya to complete preparations in time.

All-rounder Akash Gill slammed the first century by a Canadian batsman in an ICC U19 Cricket World Cup match as the Canadian defeated PNG by 80 runs. Gill became the 13th player to notch a century in the 12th edition of the tournament. Gill cracked 12 fours and two sixes as Canada notched a competitive 265 for eight after being asked to bat first. Captain Arslan Khan and Ashtan Deosammy scored 35 apiece for Canada while fast bowler Faisal Jamkhandi and left-arm spinner Aran Pathmanathan grabbed three wickets each as PNG were bowled out for 185 in 44.3 overs.