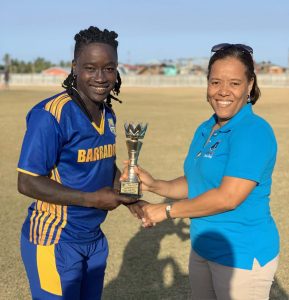 In a match that was because of the points standings virtually the Tournament Final, Barbados showed no mercy to the home team Guyana and their supporters at the National Stadium in Providence, restricting their hosts to 85/7 from their 20 overs. It took the Barbadians 16.1 overs to achieve victory by 8 wickets as Deandra Dottin once again led the team’s batting. Dottin scored 43 not out as Barbados easlily achieved its victory target.

Earlier in the month, Barbados superbly let by their All-Rounder Captain Hayley Matthews had also emerged as Champions of the Colonial Medical Insurance Women’s Super50 Cup Barbados finished the tournament 5 points clear of Trinidad and Tobago, by virtue of winning their Round 5 clash, which the two teams had entered just 1 point apart. Deandra Dottin with a blistering 73 runs and 6/43, ensured her team lifted the title for a second consecutive year. 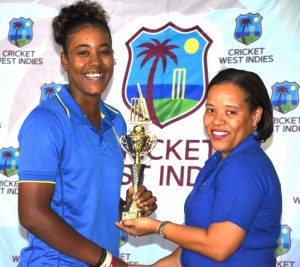 Barbados’ Captain Hayley Matthews won two of the top prizes awarded at the Tournament end prize-giving ceremony. Matthews finished the Tournament as the leading wicket-taker with 17 wickets. She also earned the top all-rounder award with 233 runs and 17 wickets.

Barbados’ Deandra Dottin of Barbados copped the award for most runs, finishing with 299 runs. She also claimed 8 wickets from her bowling efforts.