The Caribbean Premier League’s six participating Franchises: Barbados Tridents, Guyana Amazon Warriors, Jamaica Tallawah’s, St Kitts Patriots, St Lucia Zouks and Trinidad & Tobago Knight Riders have each announced their respective Caribbean Players that will be retained The Barbados Tridents have announced the Caribbean players they will be retaining for the 2020 Hero Caribbean Premier League. International retentions and signings will be announced at a later date. This year teams can retain as many players from their 2019 squads as they wish. They could also transfer players to other teams and sign emerging players.
The CPL is scheduled to take place between 19 August and 26 September, but the tournament organisers are currently watching the current situation with COVID-19 closely and are liaising with medical advisors and governments. A decision on whether the tournament can proceed as planned, or at a different time, will be made as soon as possible. 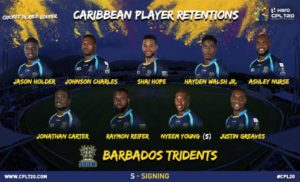 The Barbados Tridents have chosen to retain or sign nine Caribbean players ahead of the CPL draft including the exciting all-rounder Nyeem Young as one of their emerging players.
Jason Holder (Barbados), Johnson Charles (Windward Islands), Shai Hope (Barbados), Hayden Walsh Jr (Leeward Islands), Ashley Nurse (Barbados), Jonathan Carter (Barbados), Raymon Reifer (Barbados) Nyeem Young (Barbados)*and Justin Greaves (Barbados).
Nyeem Young will serve as the Trident’s Emerging Player.
Speaking about the Caribbean player retentions, Tridents captain Jason Holder said: “We are really excited to build on last year’s championship win and it is great that we have been able to retain the core of our squad for this season. Combined with the international players that we are planning to add to the squad we are looking forward to defending our championship.” 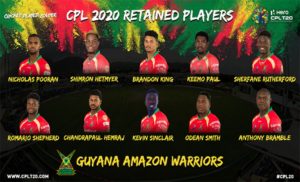 The Amazon Warriors have chosen to retain six local Guyanese players, three regional West Indian players and they have signed a Guyanese player as one of their Emerging West Indies players ahead of the CPL draft.
The following are the Local and Regional players retained and signed by the franchise for CPL 2020:
Nicholas Pooran (Trinidad & Tobago), Shimron Hetmyer (Guyana), Brandon King (Jamaica), Keemo Paul (Guyana), Sherfane Rutherford (Guyana), Romario Shepherd (Guyana), Chandrapaul Hemraj (Guyana) Kevin Sinclair – Emerging Player (Guyana)*, Odean Smith (Jamaica) and Anthony Bramble (Guyana)
Guyana Amazon Warriors Team Operations Manager, Omar Khan, commented on the retentions and signing: “The Guyana Amazon Warriors Franchise has and will always be committed to the continued development of our local and regional players. From the inception of the CPL we included young Guyanese players in our squad as part of the franchise’s mandate to provide opportunities to young aspiring Guyanese cricketers to assist in their overall development as professional cricketers. Shimron Hetmyer, Keemo Paul and Sherfane Rutherford have all benefitted from these opportunities prior to them becoming full-fledged members of our team.
“We are extremely delighted that we were able to retain the majority of our local and regional players, including Nicholas Pooran and Brandon King, both of whom have been hailed by the cricket pundits as potential future stars of West Indies cricket and who were members of our team last year. The Guyana Amazon Warriors wish all of the retained players great success in the CPL 2020.” 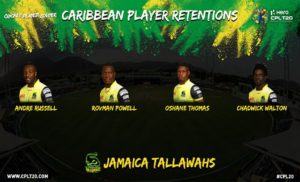 The Jamaica Tallawahs for their part have chosen to retain or sign only four Caribbean players ahead of the CPL draft:
Andre Russell (Jamaica), Rovman Powell (Jamaica), Oshane Thomas (Jamaica) and Chadwick Walton (Jamaica)!
Jefferson Miller, CEO of the Tallawahs, said: “The Tallawahs organisation will be seeking to rebuild in 2020. We are extremely excited to have Andre Russell back for another year. Andre was recently named as the leading T20 cricketer in the world by the 2020 edition of Wisden Cricketers’ Almanack. We are delighted for the opportunity to retain Oshane Thomas and Rovman Powell, both rising stars in West Indies and world cricket. I’m looking forward to having the veteran Chadwick Walton back in the dressing room, Chadwick brings a wealth of leadership experience to the team and has been a dominant player over the years in the CPL. Overall, we are looking forward to successful CPL 2020 and returning the championship to Jamaica.” 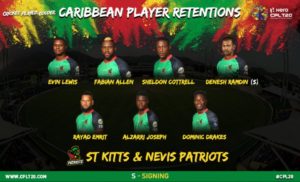 The St Kitts & Nevis Patriots have chosen to retain or sign seven Caribbean players ahead of the CPL draft, including signing Denesh Ramdin from the Trinbago Knight Riders:

The Patriots have also announced that it will be Rayad Emrit who will captain the team and Australian Simon Helmot will be the Head Coach for the 2020 season.

Speaking on his appointment as captain, Emrit said: “I am very excited to be part of the St Kitts & Nevis Patriots for a second season. I think that the team that is selected this year is going to be a very exciting one. I am very excited to be named as captain. It’s always an honour and a privilege to lead a franchise. Our new coach, Simon Helmot, knows the CPL and he knows how to win titles. He and I are going to work very hard to get the team to the finals. 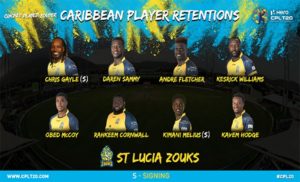 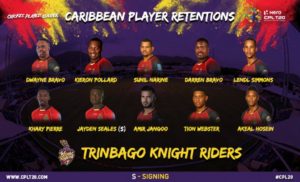