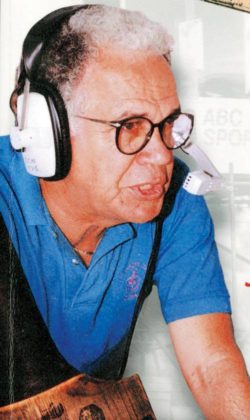 Cricket West Indies is set to honour renowned cricket commentator Joseph “Reds” Perreira for his work in broadcasting the game for close to six decades, The upcoming second MyTeam11 Test between West Indies and India – which is co-sponsored by Skoda and Fena – starting on Friday, August 30, at Sabina Park in Jamaica will be Reds’ 150th Test Match that he has attended. It will also be the 250th Test Match that the West Indies have played on home soil.

“We would like to congratulate ‘Reds’ for his outstanding commentary on the over the last 60 years,” said CWI President, Ricky Skerritt.  “He has been an exemplary broadcaster on both regional and international levels for many years and is deserving of this recognition as one of the most notable voices of West Indies cricket.”

Perreira’s first “live” cricket broadcast too place 1961 in a first-class match between his native Guyana and long-standing rivals Trinidad & Tobago at Rose Hall. Ten years later, he covered his first Test between West Indies and India at Bourda Oval.

“One of the enduring legacies of ‘Reds’ is his tenacity, coming from humble beginnings to rise to the top of broadcasting on the game from the far-flung arenas around the World,” said Skerritt.

“He has set an example of professional excellence and determination that should inspire many young broadcasters around the Caribbean to vigorously pursue the highest standards in their craft.”

Skerritt added: “I, like many West Indians of a past era, can well remember all hours of the day and night being glued to our radios, which was the only way to follow the game for many years. The game was brought to life, as we listened to ‘Reds’ and the late, great Tony Cozier fly the flag of West Indian excellence in the commentary booths around the world.”

A special presentation will be made to Perreira during the tea interval on the third day of the Second Test on Sunday, September 1 at Sabina Park, Jamaica.

St Lucia Back To Being Zouks For Hero CPL 2019!