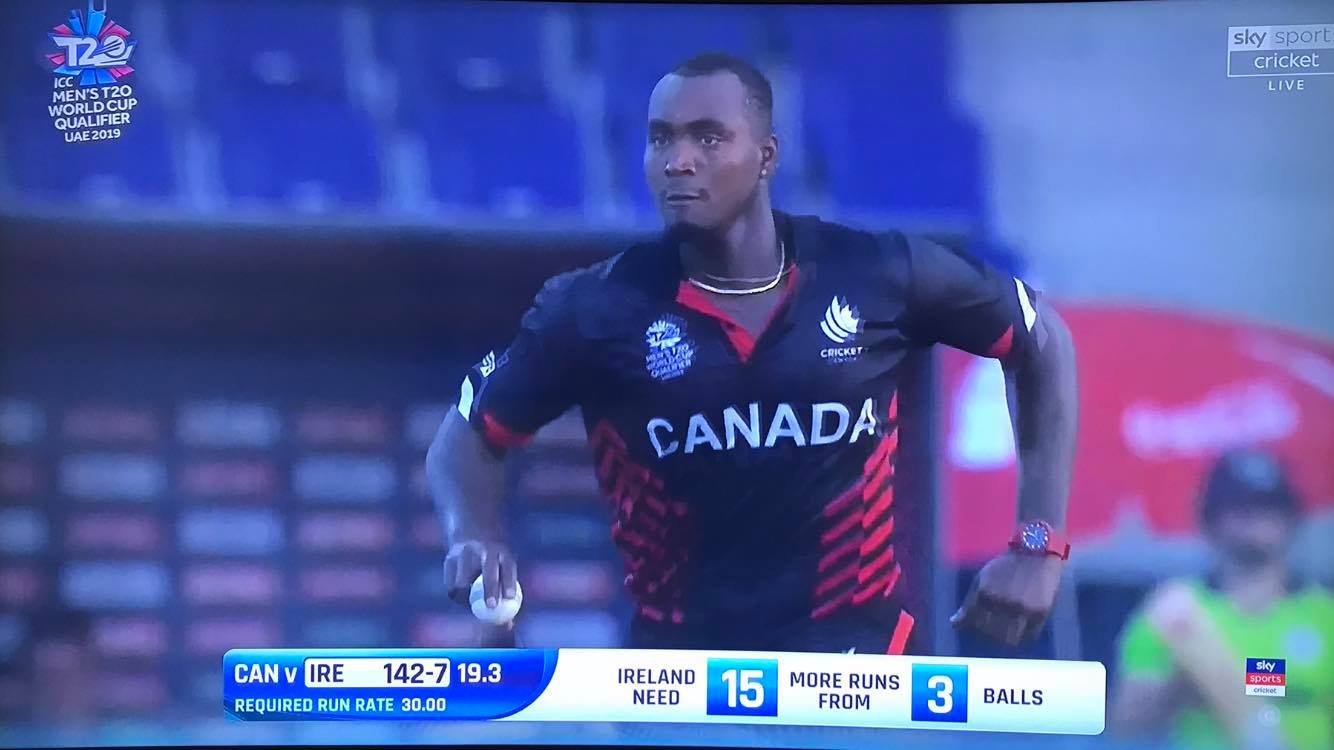 AFTER a positive 2019, which he described
as probably his best year in cricket, Dilon
Heyliger has good reasons for optimism
as far as his career his concerned.
In 2019, the 30-year-old Heyliger achieved two incredible
feats. After grabbing a hattrick for Montreal
Tigers against Edmonton Royals in the second edition
of the Global T20 Canada tournament, he was
then named Best Bowler in the ICC T20 World Cup
Americas Qualifier, played in Bermuda.
Regarded as one of the best spells seen in the
Global T20 Canada, the fast-medium bowler had
the remarkable figures of 4-1-13-3. He also had the
satisfaction of hitting the winning runs for his team.
No doubt buoyed by his performance in the Global
T20, Heyliger followed this up with 11 wickets in Bermuda
which earned him the prestigious Best Bowler
award while representing the Canadian national
team.
The Guyana-born Heyliger credits his fine performance
in the Global T20 to head coach Tom Moody,
the former Australian player, and his coaching staff.
According to Heyliger, after playing only two games
in the 2018 Inaugural Tournament, last year he was
delighted to play all the matches “That performance
was one of my best. I just stuck to the basics,
which I discussed with the coach prior to the
match.”
On winning the Best Bowler award, Heyliger expressed
sincere thanks to Cricket Canada for giving him the opportunity
to play in the Global T20, pointing out that the
experience served him well in the ICC qualifiers.
Heyliger is extremely disappointed that Canada didn’t
qualify for the ICC Men’s T20 World Cup which was scheduled
to be staged in Australia this year but has been
postponed because of the Coronavirus pandemic. After
winning their first three games, including a decisive victory
over Ireland, the Canadians lost the remaining three
matches in the tournament, staged in the UAE during the
latter part of last year.
Heyliger is however still hopeful that Canada will qualify
for the next T20 World Cup scheduled for 2021 and is looking
forward to the Qualifiers which are scheduled to be
held prior to the staging of that tournament.
Since representing Guyana at both the Under-15 and Under-
19 levels, it’s been a roller-coaster ride for the talented
Essequibian all-rounder who has plied his trade in England,
the Caribbean and now Canada. Since migration,
his aim was to represent his adopted country which he
eventually achieved in February, 2018.
According to Heyliger, his cricketing career started on the
Essequibo Coast where he represented his village team
WICKETS 6
Santos, and before long he was a member of the
Essequibo Under-15 and Under-19 teams and subsequently
represented Guyana at the Under-15
level in 2005. His progression continued three
years later when he was selected to play for his
country in 2008 and 2009 at the regional Under-19
tournaments.
In 2006, Heyliger was already a member of the Essequibo
senior team and despite his sojourns in
the Caribbean, United Kingdom and Canada, was
part of the Cinderella County side which he last
played for in 2013. In the interim, he also turned out
for the Guyana Defence Force (GDF) at the First Division
level in the Georgetown Cricket Association
(GCA) competitions.
Strong all-round performances at the First Division
level subsequently earned him a place in the 2011
Guyana T20 squad and despite not being part of
the playing 11, Heyliger said the experience was
quite electrifying and satisfying. “I decided to build
on the success of Guyana’s cricket and move on
to gain some international experience.”
Heyliger explained that he went on to play cricket for teams in Trinidad and Tobago, Antigua, and moving
farther afield to England, played for Basingstoke in the Hampshire League. “With new success and recognition
in the United Kingdom, I gained a spot in the Middlesex League with a team in Uxbridge, increasing my knowledge,
skills, and career development on the international level,” he boasted.
Heyliger’s cricketing stint in Canada started in 2014 when he turned out for Islanders Sports Club in the Toronto
& District Elite Division tournament. He however switched to Vikings in the 2015 season when he enjoyed a very
productive season and later represented Brampton Masters.
More recently, he turned out for Yorke in the Toronto & District T20 tournament, the only one played this year
due to the Coronavirus pandemic. In the interim, he has been undergoing rigorous training under the tutelage
of former Canadian player Abdool “Birdy” Samad and has also been helping out the youths under Samad’s
command.
Heyliger made his List A debut for Canada in the ICC World Cricket League Division Two tournament in February,
2018. In September of the same year, he was named in Canada’s squad for the 2018–19 ICC World Twenty20
Americas Qualifier tournament.The following month, he was selected for the Regional Super-50 tournament
in the West Indies.