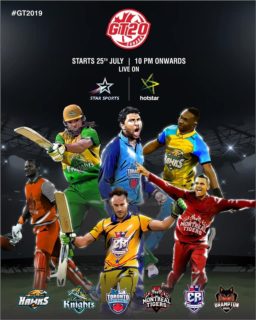 The six participating Franchise Squads in this year’s GT20 Canada 2019 Tournament will be managed by some of international cricket’s most outstanding Coaches. As much is evident from their respective career highlights!

Played 46 Tests and 145 ODI’s for the West Indies as an opening batsman and right hand medium pacer.

Dismissed under controversial circumstances in August 2005

Significantly improved Ireland's standing in world cricket as their coach.

Under Simmons’ management Ireland won 11 trophies, qualified for every major ICC event, and achieved victories over Pakistan and Bangladesh at the 2007 World Cup, England at the 2011 World Cup and the West Indies and Zimbabwe at the 2015 World Cup.

In March 2015, he accepted an offer to coach to take charge of his native West Indies after the conclusion of the 2015 World Cup.

Named as the coach of the Brampton Wolves franchise team for the 2019 Global T20 Canada tournament.

Fleming was appointed as Coach of the Chennai Super Kings in 2009 and retired as a player from the team.

He has had a very successful stint with the team winning the IPL 2010, CLT20 2010 and IPL 2011. He coached Chennai Super Kings for 6 years before it got suspended from IPL for two years according to the decision of Justice RM Lodha committee.

In IPL 2016 he became the coach of Rising Pune Supergiants.

In IPL 2018, he returned as Coach of Chennai Super Kings after the Two Years Suspension.

Fleming led the Kings to the 2018 IPL Championship Title

Moody is currently the coach for the IPL team Sunrisers Hyderabad.

Has also been appointed as Head Coach of the Multan Sultans in the PSL starting from 2018.

In 2017, he applied for the Head coach of Indian Cricket Team.

Appointed Head Coach on a two year term in July 2007

Announced as coach of the Kochi Tuskers Kerala forth the fortcoming 2020 IPL Season.

Named Coach of the Toronto Nationals Farnchise Squad for the 2019 Global T20 Canada tournament in June 2019,

Donovan Miller became a coach at the tender age of 20, and now runs his own coaching company, directs the Chris Gayle Academy and works with Essex CCC.

Born in Jamaica, Donovan was a fast bowler who represented Hertfordshire and played second XI cricket for Derbyshire and Essex.

Now a respected coach, he has twice won the Chance To Shine Coach Of The Year award, runs Don Cricket Ltd and has been at the forefront of the Chris Gayle Academy programme.

Lalchand Sitaram Rajput is a former Indian cricketer and the head coach of the Zimbabwe national team.

Rajput was appointed as the manager of the winning Indian cricket team for the Twenty20 World Championship 2007 held in South Africa.

Rajput was the coach of the Mumbai Indians in the Indian Premier League 2008.

In June 2016, Rajput was named as head coach of Afghanistan's national team.

During his spell in charge, Afghanistan defeated West Indies in a one-day international at Gros Islet and were promoted to Full Membership of the International Cricket Council.

In May 2018, he was named as the interim head coach of the Zimbabwe national cricket team.

In August 2018, he was appointed to the role on a permanent basis.

In June 2019, he was named as the coach of the Winnipeg Hawks franchise team for the 2019 Global T20 Canada tournament.