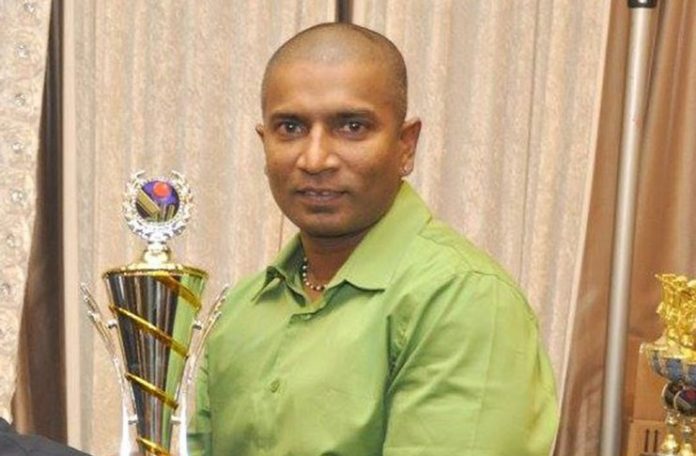 Guyana born Hemnarine Chattergoon is one of an ever expanding cadre of cricketers who post retirement from hardball cricket have successfully transitioned to the sport’s softball arena. Chattergoon who is now regarded as one of the best players in the grassroots game, has won several accolades representing Dant and Sunshine in the Ontario Softball Cricket League and Our Own in the Ontario Masters Softball Cricket Clubs (OMSCC), among other teams in and out of Toronto. His participation also includes international tournaments in Canada, Guyana, New York and Florida.
During his time as one of the Caribbean Region’s most promising youth cricketers, Hemnarine Chattergoon in 1996 became the first Guyanese batsman to register
By Frederick Halley
centuries in his first two innings of a Regional Under-19 tournament, a record that still stands to this day. The opponents were Barbados and the Windward Islands.
Regarded by many as the most naturally talented of the Chattergoon brothers, Hemnarine was destined to represent Guyana at the First Class level with the likelihood of donning West Indies colours.
Following a successful 1996 regional tournament, played in Jamaica, Hemnarine was awarded a place in the West Indies youth team to oppose Pakistan, and justified his place with a magnificent even-hundred at the Kensington Oval, Barbados against the likes of Abdul Razaq and Shahid Afridi. As fate would have it, the right-handed batsman migrated to Canada shortly after, thereby ending whatever chances he had of playing for Guyana and the West Indies senior teams.
Incidentally, the West Indies Youth team also included former Guyana and West Indies batsman, Ramnaresh Sarwan, who stroked 102 in the first innings, batting at number six; former Guyana opener Azeemul Haniff who scored 100 in the second innings after 51 in the first; wicket-keeper Vishal Nagamootoo and leg-spinner Andy Chinsammy.
Emanating from the Albion, Berbice family of cricketers, siblings Sewnarine went on to represent West Indies in four Tests and 18 One-Day Internationals and Ramnarine played at the regional one-day level for the Combined Campuses and Colleges, while Harrinarine captained the Guyana Under-15 team and also represented his homeland at the Under-19 level.
The eldest of the Chattergoon brothers, Hemnarine never enjoyed the kind of success he was anticipating following his migration to Canada and, according to him, several factors were responsible for this, including work-related issues and the inability to put in enough practice. His only First Class match for Canada was against the United Arab Emirates at the Maple Leaf ground, King City, in 2007 which saw him scoring a mere 10 runs.
In 2009, at the age of 31, Chattergoon was appointed to lead Vikings in the Elite division of the Toronto & District Association (T&DCA) tournament. The strong Vikings team included former Guyana and West Indies youth player, Zamal Khan; former Guyana captain, Damodar Daesrath; former Guyana First-Class pacer, Jeremy Gordon; former Guyana Under-19 left-arm pacer, Naresh Roopnarine; ex-Guyana and West Indies B team keeper, Kenneth Wong, and former National youth players, Abdel Fudadin and Kevin Murray. The side was also managed by another Guyanese in Michael Khan.
Hemnarine (left) with brother Sewnarine as the former is presented with a plaque in recognition of his services to
HACC by sponsor Vishal Mohan, nephew of president Narchand “Archie” Mohan.
Chattergoon returned to the Canadian side for the inaugural Caribbean Twenty/20 tournament in the West Indies
which saw the top performing domestic team qualifying for the Champions League Twenty/20 tournament. It was
later replaced by the Caribbean Premier League (CPL), whose first season began in July 2013. Guyana were the
eventual winners, defeating Barbados by one wicket with one ball to spare in a pulsating final with Jonhatan Foo claiming the man-of-the-match award.
The tournament was also the first opportunity for Hemnarine to play alongside his brother, Sewnarine, who was part of the Guyana squad and who had already played Test
cricket for the West Indies.
The now 41-year-old Chattergoon also had the unique
distinction of leading Hawaiian Arctic Cricket Club
(HACC) to four of their six consecutive championship
victories in the Premiere League of the Scarborough
Cricket Association (SCA) tournaments before retiring
at the end of the 2016 season. He was fittingly honoured
when the club held its annual presentation, dinner and
dance at the end of the season.
Long-standing president of HACC, Narchand ‘Archie’
Mohan, paid glowing tribute to Chattergoon for his
outstanding contributions over the years as a batsman and
an astute leader and, while acknowledging his decision to
call it quits, reminded him that “the door is always open to
him once he has a change of heart”.
The stocky right-hander was rewarded with a plaque, compliments of Trophy Stall Guyana. It read: “For your
outstanding dedication, commitment and contribution as a player and leader of Hawaiian Arctic Cricket Club”.
In an invited comment, Chattergoon described his joining of HACC in 2010 as a “political move” after he was
specially invited to the club’s presentation. He was subsequently named captain two years later.
Reflecting on his decision to join HACC, Chattergoon disclosed that he had no regrets but insisted that he had
played his last game when the 2016 inaugural Elite season ended, citing work and family commitments as his main
reason.
In the 2014 Premiere League semi-final, Chattergoon was at his imperious best, slamming a scintillating unbeaten
217 versus Bawa XI, leading from the front as HACC clobbered their opponents by 136 to reach the final, which
they duly won.
Chattergoon’s wife, Lena, and their lone daughter have been his most ardent and vocal supporters and are present
at all of his games.
While Chattergoon went on to play for Canada, he still fancies the century, at what is regarded as the Mecca of
cricket in the Caribbean, as his most memorable moment in the sunshine game. “I thoroughly enjoyed playing
cricket but scoring a hundred for the West Indies Under-19 team, especially when we were asked to follow-on, is
still fresh in my memory,” he asserted.

Suggested Roles And Responsibilities For Parents Of Sports Involved Children!