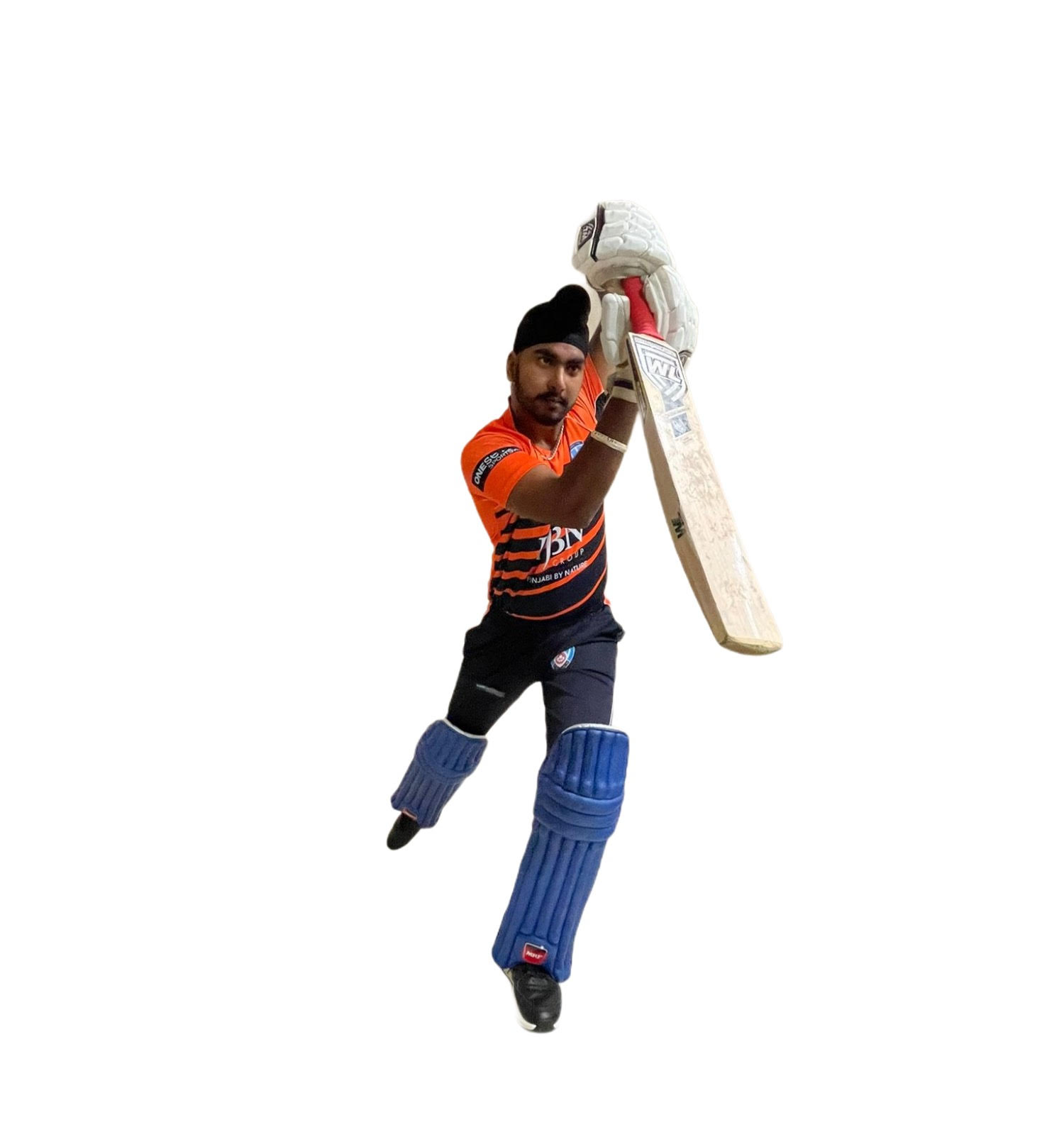 Jaskaran Singh One To Watch!

Born November 3, 2000, in Patiala,
Punjab., Jaskaran Singh was already
18 years old when he moved with his
family to Canada in April 2019. By then
Jaskaran already had ten years of active
cricket participation under his belt having
started practicing professionally at the age
of 8 years at the Mohali, Punjab School’s
Academy and PCA stadium.

Jaskaran’s interest in cricket had developed
from his early childhood, fueled as it was by
his Dad, Urinder’s, fondness for the game
and the parental encouragement and support
he provided. As a thirteen-year-old Jaskaran
played U-14 cricket at the Mohali District
Level. He also played U-16 cricket at that
same level in three consecutive years, at
ages 14,15 and 16.
Jaskaran was second
highest run-getter in
his second year of
U-16 cricket and
in the following
year, his third
at that level, he helped his team to reach
finals in my third year by grabbing 21
wickets in 6 matches while scoring crucial
runs as well. Just prior to his immigration
to Canada, Jaskaran played U-19 District
Level cricket for Mohali in 2018 at the age
of 17.

In addition to his Dad, two others who
have had a significant impact on the
development of Jaskaran’s career are the
coaches he’s had so far. In India, Jaskaran
was trained by Coach Harwinder Singh
Baidwan for 10 years. When he eventually
came to Canada, Coach Derek Perera
immediately recognized his talent and
provided Jaskaran with the opportunity
to play for the Ontario Cricket Academy,
arguably one of the best Junior cricket
clubs in all of North America!

In 2019, newly arrived as he was in this
country and becoming familiar with his
new surroundings Jaskaran played only
one tournament for the OCA, the U-19
Festival. wasted no time in announcing
his credentials, however, scoring
centuries in both his very first match as
well as the Tournament Final!

In 2020, Jaskaran was a member of the
OCA Elite team which participated in the
Toronto & District Cricket Association’s
T20 Tournament. Jaskaran and his OCA
Elite teammates reached the playoffs
that season. Jaskaran also represented
the OCA in the Brampton & Etobicoke
District League’s (BEDCL) 2020
Season T20 Tournament, scoring two
centuries in five matches played.

As a right-handed, top order, batting allrounder,
Jaskaran usually bats at number
3 or 4. If and when needed, however, he
can also fulfill the role as a hard-hitting
finisher to an innings. In terms of his
bowling, Jaskaran is an off-spinner who
relies on variations of flight and spin to
determine his success.

Jaskaran’s s ultimate ambition is to play for
the Canadian National team and to bring
glory to his adopted country through his
outstanding performances. Towards the
fulfillment of his lofty ambitions he has
been working hard on further developing
his skills while striving to eliminate his
weaknesses. He spends significant amounts
of time with the OCA’s Coaches working
with them on improving his game.

The hard work that Jaskaran has been
putting in under the guidance of the OCA’s
coaches appears to be paying dividends.
During this year’s current Season, he’s
played with OCA’s Elite team in the T&D
50 Overs Tournament, scoring important
runs against top teams at an impressive 150
strike rate . He’s also captured 8 wickets
in 5 matches as well with bowling. His
outstanding all-round contributions have
helped the team to make it to the Playoffs.
Jaskaran has also been playing for the OCA
in both BEDCL and Mississauga League
matches this Season. In the BEDCL’s 50
Overs matches, he’s already scored once
century and along with his teammates
will be hoping to emerge as winners of the
Tournament when it concludes in a few
weeks time.

While playing for the OCA in the
Mississauga Premier League. Jaskaran has
also been scoring runs at an average of 50
per innings. Hi outstanding batting has
helped the OCA to easily make it to the
playoffs and to advance even further to the
October 3 semi-finals.
As such Jaskaran Singh’s evolving,
outstanding, all-rounder cricket career is
definitely now One To Watch!