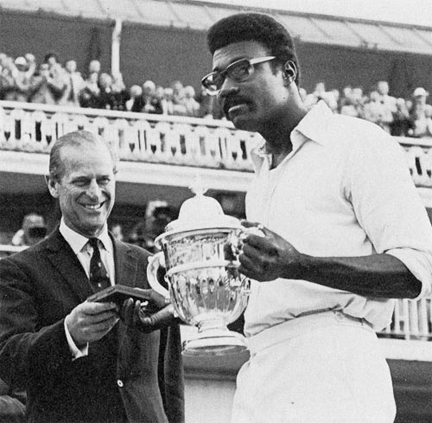 The West Indies 1975 World Cup squad was confident of its chances of doing well in the competition which was scheduled to be held during the English mid-summer month of June. In full appreciation of cricket’s importance to the peoples of the region, the Caribbean Broadcasting Union’s (CBU) member radio stations then made the very bold decision to send a team of their own commentators to England to cover the World Cup.

In early 1975, during a Barbados hosted CBU members meeting, it was decided that a Caribbean Commentary team comprised of Barbados’ Tony Cozier, Guyana’s Reds Perreira and Dominica’s Jeff Charles, who was already in England attending a BBC sponsored course, would attend the June 7th – 21st World Cup to provide live radio coverage of the West Indies’ matches to listeners within the region.

The squad departed for London at the end of May, while the CBU commentary team of Tony Cozier and myself followed a few days later to link up with Jeff Charles who was already there. Our three member CBU Panel was also to be bolstered by the periodic presence of some of England’s very best Commentators in the persons of John Arlott, Trevor Bailey, Henry Blofeld and Christopher Martin-Jenkins. I was therefore going to be working in very illustrious company. Having arrived our plans to go by rail to Manchester were abandoned after the West Indies Manager Clyde Walcott invited us to travel with the squad on the team bus.

Along with Australia, Pakistan and Sri Lanka, the West Indies were slated in Goup B for the Tournament’s Preliminary Round Robin matches. Group A was comprised of the hosts England, East Africa, India, and New Zealand.

The West Indies campaign began with a no contest win against Sri Lanka who were bowled out for 86 as Bernard Julien took 4-20. Roy Fredericks then wasted no time, racing to 33 not out as the West Indies reached 87-1 to secure a nine wicket victory.

ven before the win my mind had already turned towards the West Indies’ next encounter, an all important clash against the very strong Pakistan. I was overly conscious of the fact that by then I had actually only done commentary in 6 test matches and now 1 World Cup game.

As the BBC’s Game of the Day, the West Indies –Pakistan match was to be broadcast throughout England, throughout the entire Caribbean and to the rest of world as well. As the other two participating Commentators, Tony Cozier and England’s Christopher Martin-Jenkins, were already in possession of all the required experience. The pressure was therefore very much on myself and Jeff Charles to also be at our very best.

The West Indies – Pakistan match played at Edgebaston was expected to test the West Indies. It most certainly did, evolving as a nail-biter and producing at its end the most exciting finish of the entire World Cup.

Batting first Pakistan, led by Majid Khan’s 60, posted a challenging 266-7 off 60 overs. Khan was ably supported by Wasim Raja’s 58 and Mushtaq Mohammed’s 55.
In reply, the West Indies were reeling at 99-5 with Fredericks (20), Greenidge (4), Kallicharran (16), Kanhai (24) and Richards (13) all back in the pavilion. Skipper Lloyd (53), together with useful lower order contributions from Julien (18) and Holder (16), helped the West Indies to reach 203-9 when their last man Andy Roberts strode to the wicket to join his Vice-captain Deryck Murray who was then not out on 30.

Still a whopping 63 runs adrift, it appeared for all intents and purposes to be “all over red rover” for the West Indies. Murray and Roberts however had other intentions. From singles and twos and with the odd boundary thrown in they slowly inched towards the 277 that was required for victory. As they did so the tension among those at the ground and even within the Commentary Box, became
almost unbearable. Made even more so by the realization that a loss would have resulted in the West Indies not advancing beyond the Preliminary Round.

220-9 became 230-9, then 240-9 and by the time the score had reached 250-9 the scenes had become almost unbelievable. Everyone at the ground was on their feet. Inside the Commentary Box, for Charles, Cozier and myself, it was almost unbearable to watch what was unfolding before our eyes: a desperate attempt to snatch victory from the jaws of defeat!

Myself and Trevor Bailey were on commentary and at the end of our shift when the score had miraculously
reached 265-9. Out of sheer superstitious fear that the scheduled switch might result in the innings ending loss of the final wicket, it was decided that we should remain on
commentary for the last rites, which ever way those turned out to be.

So it was, as luck would have it, that I was on air when with the score on 266-9, Roberts pushed for a single to midon and ran like he had never done before. Safely beyond the non-strikers crease and in fact all the way back to the West Indies’ dressing room.

Back on the field there was absolute pandemonium. Happy spectators were hugging each other, many unashamedly shedding tears of absolute joy. It wasn’t much different in the Commentary Box as Charles, Cozier and myself all found ourselves with moist eyes.

Manager Walcott later reported to us that it had looked to be all over until the score had reached 230 odd. It was only then that belief in the improbable had begun to take hold, after which no one was allowed to leave their seats, even if they were in need of responding to nature’s call!

Big men cried that day, myself included. Thankfully my tears were actually shed after the match was completed and the victory secured, not during the actual broadcast.

After that match, the last two weeks of the Tournament seemed to go really fast. The West Indies next match was against the surging Aussies. That however did not produce the anticipated close encounter. Alvin Kallicharran tore into the Australians’ famed paceman Dennis Lillee with a dazzling display of strokes that produced 14 fours and 1 six in a 83 ball 78, as the West Indies raced to 195-3 in response to Australia’s posted 195. Lillee finished with figures of 10- 0-66-1.

The West Indies’ victory over Australia set them on course for a semi-final clash against New Zealand. Another comfortable victory resulted as the Kiwis could only muster 158. In reply the West Indies strolled to 159-5, thereby advancing to meet Australia in the Final at Lords.

The day before the final, myself and our Scorer Bill Frindall were invited to lunch with the renowned John Arlott, globally acknowledged as cricket’s greatest ever Commentator. The lunch was delicious and the conversation even more so after our consumption of quite a few bottles of red wine.
I reminded Arlott of his commentary during the West Indies 1950 England tour. During one of his commentary spells he remarked that “Ramadin and Valentine must have collectively bowled more maidens than we have here at Lords!” Later, during the Old Trafford Test, he commented that “it is such a wet and cold day that not even the pigeons have come!” .

His typically succinct response to my recollections was “ You did listen a lot Reds, during that Tour!”

The final was as it should be. The West Indies recovered from 51-3 to eventually post 291-8. Skipper Lloyd made an 84 ball 102, while featuring in a superb 148 run partnership with the Rohan Kanhai. Australia in reply were eventually dismissed for 274.

The final, attended by 26,000 spectators, was also seen and heard by millions more on television and radio. Needless to say for Messrs Charles, Cozier and myself, as the Tournament’s Caribbean Radio Commentators, the West Indies emergence as 1975 World Cup Champions made us individually and collectively more proud than we had ever been before. My ever grateful thanks as always to the CBU
for having allowed me the opportunity to be a member of the 1975 World Cup Radio Broadcasting pane

Ashmead Nedd: A Star on the Rise