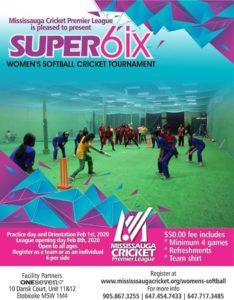 Mississauga Cricket Premier League has announced plans to host a Super6ix Open Softball Tournament for interested female cricketers. Tournament will be held from February 8 onwwards with matches to be played at the Etobicoke One Seven Facility which is located at 1o Dansk Court, Units 11 & 12.

February 1 wil be the Official Practice Day and Orientation for the Tournament. Participation in which is open to all ages. Interested female cricketers have been invited to register either as teams or as individuals. Participating Teams will be limited to six playing members.

The 50 Registration Fee for the Tournament includes a Team Shirt, refreshments and opportunities to play in a minimum of 4 matches. Those interested can register online at www.mississaugua.org/women-softball.

Cricket Canada National Selector Surendra Seeraj has described the Tournament as a wonderful initiative whih he hopes can thrive and continue.