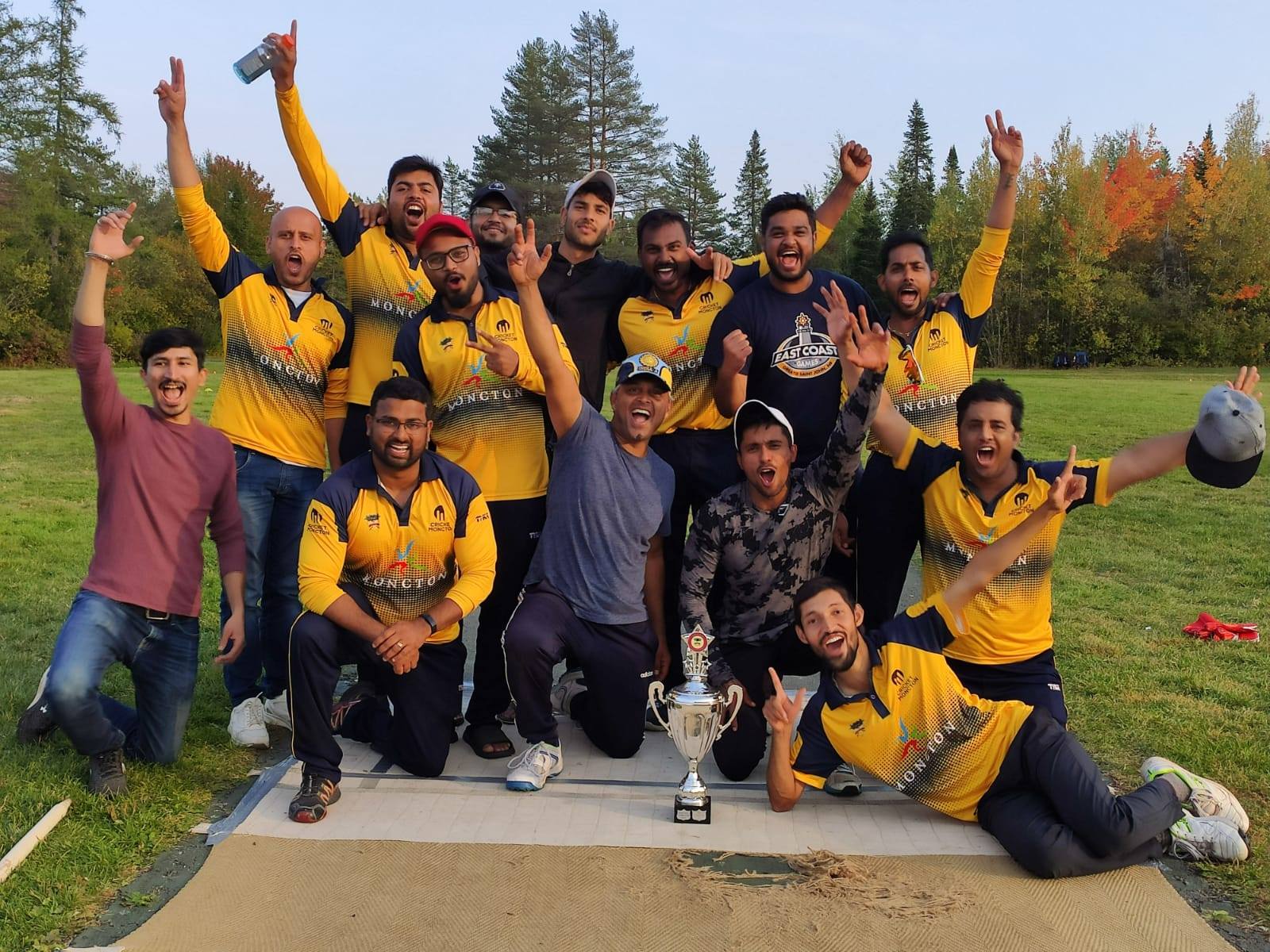 One of New Brunswick Cricket’s recently
formed Clubs and two of its Executive
Members have been recognized for
their outstanding contributions to the further
development of the sport of cricket within the
province. SportNew Brunswick has recognized
the Moncton Cricket Team, Cricket New
Brunswick’s President Kapil Choudhary and its
Treasurer Winston D’Souza for their outstanding
contribution’s to the province’s cricket!
The Moncton Cricket Club was incorporated as
a not-for-profit organization in 2018 and became
an associate member Cricket New Brunswick
in October of that year. The Club transitioned
to Cricket New Brunswick full membership in
December 2019.
Since its formation Moncton Cricket Club (MCC)
teams have enjoyed outstanding success on the
field of play. The Club emerged as Championship
winner of both the newly established 2019 New
Brunswick Cricket League T20 (2019) and the
Association’s 2020 T40 League. It was also a 2020
T20 League Finalist!
Led by its current President Nick Badyal and
his Co-Founder of the Club Ketan Shah along
with their Board of Directors, MCC was also the
Recipient of the 2020 Konica Minolta Sport New
Brunswick, “BrunNet Team of the
Year”Award! MCC’s notable
activities since its 2018 formation
have included the hosting of
indoor cricket activities in the
greater Moncton area since
the Fall of that year. MCC has
also hosted a Spring 2019 online
Umpires Training Session, while its
Club officials have visited schools
within their jurisdiction to promote
cricket and generate awareness
and enthusiasm for the sport.
Kapil Choudhary is the current
President of Cricket New
Brunswick having been reelected
in March 2020, after
first serving the role during
2019. Choudhary who was the
Recipient of 2020 Konica Minolta
Sport New Brunswick, “Volunteer
Administrator of the Year” Award
is also the current President of Saint John Cricket
Club, having served in that position since 2016.
Among Choudhary’s many outstanding
presidential initiatives to date was his leadership
role in the development of the City’s first and
only cricket ground and training facility. He also
collaborated with other provincial presidents to
organize the Maritime Cup 2020, Canada’s only
regional competition during the COVID-19 era,
and secured the funding from Cricket Canada
for the Tournament’s hosting. Choudhary has
also been directly involved in the organization
of countless club, city and inter-provincial
tournaments within New Brunswick.
Choudhary also initiated inter-organizational
partnering in the preparation of “return to play”
guidelines to enable Cricket New Brunswick to
host its own league and playoff matches for
the 2020 summer.
The holder of Level 1 Cricket Canada coaching
and umpiring certificates, Kapil Choudhary
has now been actively involved in cricket for
over 25 years, 15 of those here in Canada. His
Canadian involvement has included his player
participation on the 2017 New Brunswick’s
Provincial team. He has also played cricket
at the school (District/Regional) and university
levels within the province.
As the current Treasurer of Cricket New
Brunswick since March 2020, Winston D’Souza
is also the current Vice-President of Cricket
Moncton Club. A position he has held since
September 2018.
A Recipient of the 2020 Konica Minolta Sport
New Brunswick, “Taylor Printing Group Official
of the Year” Award, D’Souza has also served
as Chair of Cricket New Brunswick’s Umpires
Committee since June 2019. His many
outstanding activities in that role have included
his coordination of Umpire Training for the
Atlantic provinces with TCU&SA fully certified
and experienced umpires (Bijal Patel, Saurabh
Naik, Ashish Shah & Francis Fernandez) during
Spring 2020.
As the holder of Level 1 Cricket Canada
Umpire and Level 1A England Cricket Board
Association of Cricket Officials certifications,
D’Souza has also conducted Umpire Training
sessions during Spring 2019 with the Moncton
Cricket Club. As well as performing actual
umpiring duties himself, he has also coordinated
the appointments of neutral umpires for CNB
League and playoff matches.
Having passed the West Indies Cricket Umpire
Association (USACUA) preliminary examination,
D’Souza has officiated in several regional
tournaments including the 2018, 2019 and 2020
Maritime Cup, the 2019 Eastern T20 Cup. He has
also umpired in matches for two of the USA’s
competitive leagues, the Washington Cricket
League and Michigan Cricket Association.
In addition to his umpiring duties D’Souza
also partnered in preparing the return to
play guidelines for summer 2020 Cricket New
Brunswick League & playoff matches.
Our heartiest congratulations to all on their well
deserved respective awards!

THE IMPORTANCE OF OFF-SEASON TRAINING!