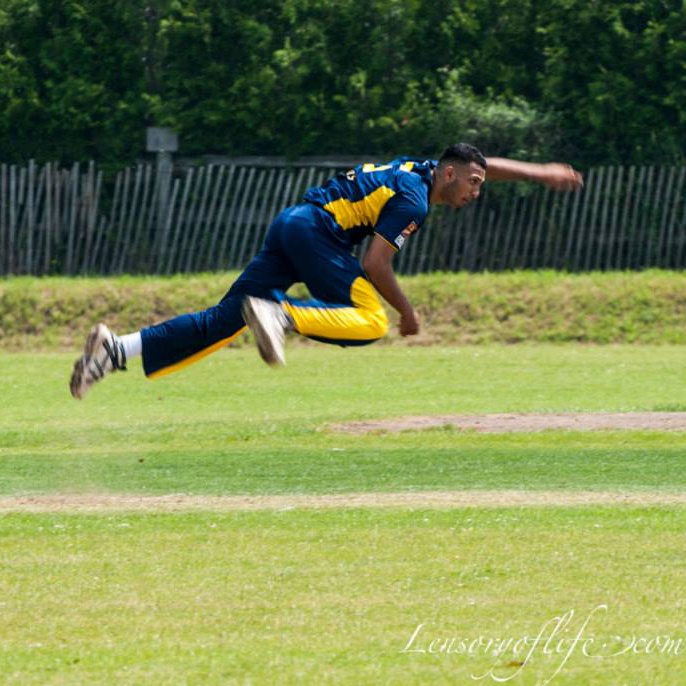 ONE TO WATCH: RAYYAN PATHAN

Canada born (December 6, 1991) Rayyan Pathan, who has represented his country
as a right-handed batsman and right-arm medium pace bowler, now has every
reason to be optimistic about his career prospects as a Canadian National cricketer.
Pathan who made his Canadian ODI debut against Kenya in Dubai on March 13, 2013
and had also represented Canada at the Under 19 level during the 2012 Under 19 World
Cup Qualifier, has since then been making steady progress in his self proclaimed quests to
become a staple in the Canadian team, whilst showcasing his talents to global cricket’s
current T20 Leagues.
On 3 June 2018, Pathan was selected to play for the Montreal Tigers in the players’ draft
for the Inaugural edition of the Global T20 Canada Tournament. The following year he
was selected to play for the Vancouver Knights franchise team in the 2019 Global T20
Canada tournament. In October 2019, he was named in Canada’s squad for the 2019
Regional Super50 tournament in the West Indies. He recorded a highest score of 46 and
also captured 8 wickets with his medium-pace bowling during Canada’s St Kitts hosted
2019 Cricket West Indies Colonial Medical Life Super50 Tournament matches.
Pathan first became interested in cricket at the age of 13, but says that back then he
WICKETS 16
was simply following the footsteps of his older brother. There wasn’t anyone of
note attempting to influence or guide his involvement. He very simply played the
game with his friends as a source of recreational fun. It was long though before the
realization dawned upon him that he was sufficiently good at it to warrant pursuing
an involvement on a far more structured basis.
Pathan’ now plays his League cricket with the Vikings Cricket Club and has been a
huge part of the Club’s ongoing success. Vikings are the reigning two times defending
Champions of the Toronto & District Super 9, widely regarded as Canada’s marquee
T20 League. Vikings secured back to back T&D Super9 Championship title wins in
2018 and 2019.
Pathan readily admits to being fully cognizant of the
hard work and dedication that will be required for
the further advancement of his cricket career and
for the realization of his national team member and
international T20 player goals. He is not in any way
averse to “walking the walk” that will take him to
the fulfilment of the cricket ambitions talk that he
has talked.
As evidence of that, Pathan says that as
those who are closest to him will readily
verify that he has such a jovial and fun
loving personality that anyone who
comes into contact with him off the
field would find him very likeable.
The moment he steps on to a cricket
field, however, all that changes
as he becomes the consummate
warrior whose prevailing attitude is
very much “game on!”
With the Canadian National Men’s
team now likely to have a slew of
competitive match engagements
in the forthcoming 2021 New
Year, Rayyan Pathan should likely
have his fair share of playing
opportunities to prove his mettle.
If and how he does will definitely
be One To Watch!

THE IMPORTANCE OF OFF-SEASON TRAINING!

HIBA SHAMSHAD; SETTING WORTHY EXAMPLES FOR OTHERS TO FOLLOW!