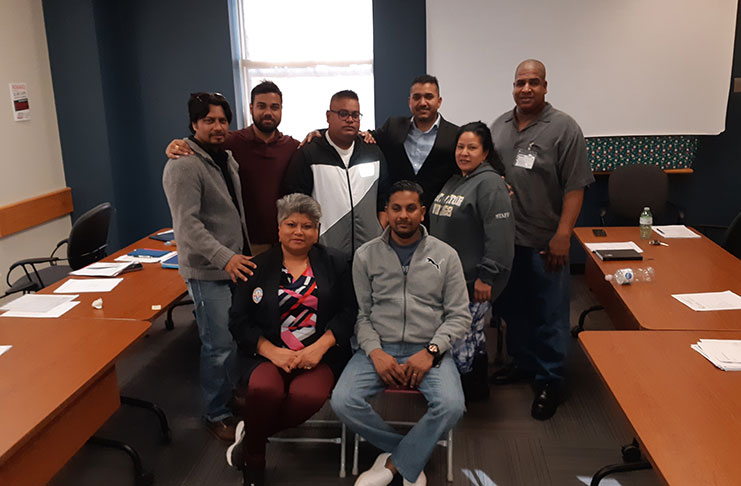 THE Ontario Softball Cricket League (OSCL) has
prided itself with keeping the grassroots game of
softball cricket alive for the enjoyment of cricket
lovers and fans in Ontario, Canada and nurturing
as well as promoting good sportsmanship in all its
activities since its formation in 1995 – some 25 years
ago. The league is also recognised for its efforts in
promoting educational and cultural activities for the
benefit of youths as a means of encouraging them to
continue to make a positive impact, while showcasing
the diverse culture of Guyana and the Caribbean
as well as good athletic sportsmanship to future
generations.
At its first Annual General Meeting, held in 1996,
a 16-member board, headed by Buddy Singh as
president, was elected to run the affairs of the league.
Other executives elected were: Kenny Gildharry (Vicepresident),
Dharam Lall (Secretary), Pete Jadunauth
(Assistant Secretary), Steve Ramchand (Treasurer),
Shamsundar Singh (East End Coordinator), Haro
Budhoo (West End Coordinator) and Vish Jadunauth
(Umpires and Ground Coordinator). The committee
members were Albert Ramcharran, Clement
Moonsammy, Raj Singh, Daniel Daligado, Sheik Ali,
Dereck Chung and Jason Randehol.
Additionally, it’s important to note the team that put
together the Constitution and Playing rules in the
infancy stages of the league, consisted of Chairman
Girdharry and included Pete Jadunauth, Vish Jadunath,
Derrick Chung, Jason Ramdeyol and Daniel Daligado.
Based on the records, Scarboro Angels is the only
team that remains intact and still have at least fifty per
cent of its original first year players plus their uniform
(notably white) has never changed. Scarboro Angels
have also had the longest serving captain – the same
since 1996, believed to be a record for any sport being
25 years and counting.
The OSCL’s first newsletter was spearheaded in 1999
and 2000 by then PRO Neishaw Girdharry who was the
first female executive and an actual player. Hence, she
was also the first female player to also participate in
league games.
Based on reports, after just one month, President Buddy Singh,
who was reportedly involved in a vehicular accident, never
returned to the league. It meant that Girdharry was entrusted
with the leadership and was subsequently elected as president
until he called it quits in 2011.
Girdharry vividly recalled whilst using the SCA hardball ground
at Ashtonbee, being told by its president that softball was
bottom house cricket and the players were damaging their
grounds and leaving the place in a mess and that the League
would soon cease to exist. After Girdharry stepped down, Albert
Ramcharran served at the helm for the next nine years before
he also did not seek re-election in 2020, paving the way for Ravin
Babulall to take over the leadership role.
It should be noted that from an inaugural executive membership
of 16 members, this has been reduced to eight. During the
early days of the league, some forty plus teams, comprising
of sides from both the East and West ends, participated in the
tournaments organised by the OSCL. The respective winners
clashed in what was known as the “Grand Final,” competing
for the TD Canada Trust Trophy. The All Stars 25-over knockout
tournament and the Executives versus Over-40 feature, which
was introduced in 1998, also formed part of a packed itinerary.
While all matches were played with the Supreme balls from
the inception, the OSCL made a significant step in 2018 with the
introduction of white balls for all three of its tournaments (10
overs, 15 overs and 20 overs). Prior to that, the white balls were
used only in the 10-over tournament in 2016 but its attempts to
use them in 2017 were met with mixed reaction by members,
with some teams wanting the white balls to be used in all
competitions, while others reasoned they should only be used
for the T10 as was done in 2016.