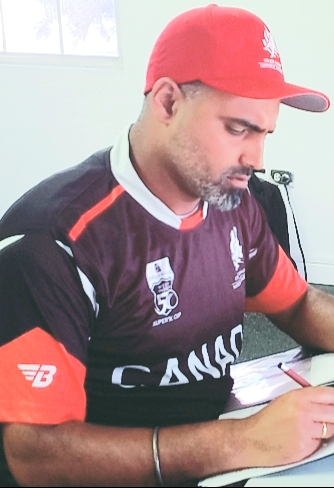 Success Strategies A F EW I N S I G H T S AN D I D EAS ON COACHING!

With cricket soon to be resumed, post COVID-19, I thought it might
be both timely and useful for me to share a few insights and ideas
with my fellow coaches and players as to how they could increase
their levels of achieved performance success during the forthcoming
Season. As a foundation for any such discourse, however, I would
hope that we can all agree that while every cricketer will naturally
possess their fair shares of strengths and weaknesses. Technique
alone will never be sufficient as a means for any player to achieve
their ultimate level of success!
Cricket is more often than not a momentum sport. If you are doing
well then you will do so consistently, if not you may, conversely,
struggle constantly. As such it becomes very important for any coach
to not allow themselves to become trapped in the plans of their
By Amarinder Bhinder!
opponents as opposed to being at all times active in the pursuit of their own. Your level of success will
always be greater if your opponents are playing to your plan and when you are not playing to theirs!
As a coach it’s also important to analyze
opposing players in terms of their preferences in
both batting and bowling. As an example, which
type of bowling does their batters prefer to face,
seamers or spinners? how do their batsmen fare
against seamers relative to their success against
spinners or seamers etc?
During the COVID-19 lockdown, analyzing
the team strengths and weaknesses of Canada’s
likely opponents in forthcoming international
Tournaments is one of the activities I have been
engaging myself in. My analysis has helped me
to improve my understanding of which teams
have demonstrated weaknesses against seam or
spin. As an example, within the past two years,
there are some teams that have actually lost a
whopping 63% of their wickets against left-arm
spinners. That knowledge can now of course be
used to determine the composition of Canada’s
playing XI the next time we play against any of
those teams.

Cricket is also very much a mind
game! As coaches, we should therefore
always be on the lookout for ways and
means to undermine the mindsets
of our opponents to such a degree
that we force them to give of their
very best in order to defeat us! Both
coaches and players must have a fair
idea on how to increase the pace of
the game, by shifting gears from one
through to four, even five at exactly
the right time. Match awareness and
pressure absorption can often dictate
the eventual outcome of encounters
between evenly matched teams!
Using modern technology and apps
also helps a lot in modern day cricket.
Before the toss has been spun, coaches
should now routinely have a fair idea
as to the daily weather forecast. Being
aware of what the weather is likely
to be can have a major influence on
decided team strategies and tactics!
As long as players are giving 100%
according to their respective abilities,
coaches should however be satisfied.
The main challenge for any coach is
simply how to get the very best out
of their players. It’s all about man
management.
In the end, I would suggest that as
long as your players are hungry to do
well and give 100% according to their
abilities you are doing a pretty good
job. Wishing you all the best of luck
for upcoming games.

Nick Manohar: One To Watch!