West Indies Under-19 Coach and Cricket West Indies (CWI) High Performance Manager Graeme West, is satisfied with the progress shown by the West Indies Rising Stars Under-19s, after they completed their September 13-23 camp in Antigua. 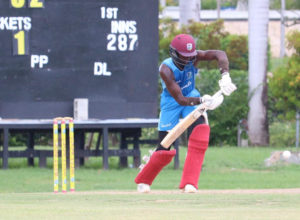 The ten day camp was the next stage of the preparation for the ICC Under-19 Cricket World Cup in South Africa in January 2020 and concluded with two practice games that featured Windward Islands opener Kimani Melius scoring two centuries, who brought his first class exposure to the fore.

“The practice games were opportunities for the players to put into practice the game strategy for 50 Over Cricket that was discussed and rehearsed throughout the camp. It was pleasing to see players heading in the right direction across all skill sets and phases of the game,” said West to CWI Media.”Kimani Melius’ two centuries stood out alongside Mbeki Joseph’s 130 in the second game having made 51 in Game One and there were half centuries for Leonardo Julien, Kevlon  Anderson and Nyeem Young.”

He continued, “The camp needed to be high in intensity with a lot of ground to cover, morning and afternoon practice was a regular occurence in some testing conditions with temperatures up in the nineties, but it was encouraging to see the players come through and keen to keep developing.”

Following the camp, an 18-man squad will be selected for the next stages of the preparation for the ICC Under-19 World Cup. Many of the players will benefit from being part of training camps for the various franchise teams in November’s upcoming Colonial Medical Insurance Super 50 Cup.