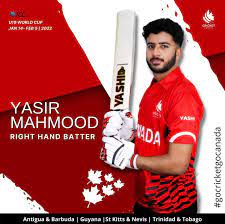 As the son of Nasir Mahmood a former Bahrain
National cricketer, Yasir of the same surname,
now harbors the very admirable, albeit lofty,
ambition of helping Canada as his own birth country to
win a World Cup.

Born on March 27, 2003 in Toronto,
Canada Yasir has had this ambition ever since he was
first introduced to cricket, not at all surprisingly by who
else but his Dad, at a very early age. Yasir immediately
fell in love with cricket following his initial introduction
and since then has been diligently developing his career
further.

With England’s Joe Root as his all-time favorite cricketer
and his batting style patterned after India’s very stylish
Shubman Gill, Yasir has progressed admirably through
Ontario junior cricket ranks to be one of Canada’s
most valued batting all-rounders at that level. Hence
his selection to the Canadian Squad as a candidate to
fulfill that exact role during the forthcoming Caribbeanhosted
2022 ICC U19 World Cup.

Whether Canada with Yasir’s help can actually win
the World Cup, given the quality of opposition likely
to be encountered, is yet to be determined. Yasir will
be sure to be giving of his very best, however, each
and every time he steps onto the field as a member of
Canada’s chosen playing XI for any of its 2022 World
Cup matches.

Known for his abilities to play the stabilizing anchor role
as a batsman, Yasir will also be expected to contribute
as a bowler with his right arm leg-spin. In doing so he
will be hoping to help his team’s cause by capturing his
fair share of wickets, while maintaining a sufficiently
acceptable economy rate for runs scored off of his
bowling.

Gavin Niblock: The Boy From BC!

Siddh Lad’s Primary Cricket Ambition About To Be Fulfillled!