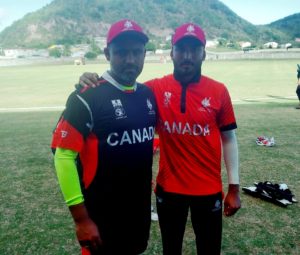 Set up by a run-a-ball hundred from Nitish Kumar and formalised by steady bowling, Canada stunned the defending champions Combined Campuses & Colleges Marooners in their November 14, St Kitts hosted Preliminary Round encounter to clinch their first win in the Cricket West Indies 2019 Colonial Medical Insurance Super50 Cup . Chasing 250 for victory, the Marooners were undone by the pace and spin combination of Kaleem Sana-ur-Rehman and Kanwar Mann. The two Canadian bowlers shared six wickets to send the Marooners sliding to their third defeat in the Tournament.

Left-arm pacer Kaleem grabbed 3-37 from 8.1 overs and Mann snared 3-38 from nine overs, as the Marooners bid to put up a stern defence of their title hit a snag when they were bowled out for 149 in 35.1 overs in their Group A contest at the Conaree Cricket Centre. Jonathan Drakes top scored with 40 and Akeem Jordan, batting at eight, showed late defiance to score 37, but the rest of the Marooners batting failed to ignite with no other batsman able to reach 20.

Earlier, Nitish Kumar had cracked 14 boundaries in his run a ball 102 (102) – his third List A hundred – to lead the Canadian batting and propel them to 249 in 49.1 overs, after they had been sent in to bat. Kumar shared two significant stands that propped up the Canadian batting, on what was a placid pitch, after the innings had gotten off to disastrous start with the loss of opener Shereyas Movva for the 2 in just the third over and with the score on just 4.

Kumar however rescued the Canadian innings, providing the backbone to two significant partnerships. He added 80 for the second wicket with Jeet Metha and 103 for the third wicket with Shahid Ahmadzai.

Metha made 34 from 64 balls before being run out. Ahmasdzai was even more supportive of Kumar in compiling 73 from 87 balls that included five fours and four fours.

Following Kumar’s dismissal, he was eventually caught by Henry on the deep mid-wicket boundary off the Marooner’s Skipper Carlos Brathwaite’s bowling while trying to push the scoring along, the Canadians crumbled. The remaining seven wickets fell inside the last 10 overs for only 62!

Jordan, one of last season’s leading bowlers, was the pick of the Marooners attack. He had the outstanding figures of 5-33 from nine overs, his second List A five-wicket haul. Jordan was well supported by his Skipper Carlos Brathwaite, the immediate past West Indies Twenty20 International captain, who ended with 4-40 from 9.1 overs.