Humber Hawks led by Rohan Kundlass won the National Championship, defeating Carleton University in the Final. Those two teams along with Laurier Hawks and Humber Hawks contested the semi-finals.

At the Tournament’s conclusion 40 athletes were short listed for invitations to a High Performance Camp. An All-Star team will also be formed to travel to the US to compete against the American College Cricket All-Star team in January. 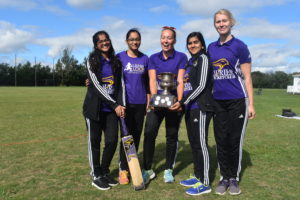 The Championship’s Best Bowler was Sakina Rizwan. The Best Batswoman was Srishti Raha, and the Tournament MVP was Simran Kapoor.

The Women’s National Championship was hosted to inaugurate women’s hardball cricket and to encourage more players to take on the game! Canada’s women’s cricket community has continued to grow significantly since Canadian College Cricket’s introduction of the Women’s Ontario Cup last March!

The Canadian College Cricket’s first Awards Gala was hosted on September 8th at the Woodbine Banquet Hall to celebrate the success of players and the University cricket community throughout the year. A few marquee Canadian Players were present including Rizwan Cheema, Saad Zafar, and Rayyan Pathan. The respective Presidents of both Cricket Canada and Cricket Ontario, Ranjit Saini and Shah Zafar, were also present. The event also hosted many university and college officials. The theme of the event was to educate the community about Canadian College Cricket’s programming and promotional initiatives.

Canadian College Cricket is an organization that aims to provide the youth with an opportunity to pursue their passion for cricket alongside their academic education at the college and university level. CCC organizes indoor and outdoor leagues including annual Canadian university/college national championships for both men and women.

With the rapid increase of international students from cricket appreciating countries and regions such as India, Pakistan, United Arab Emirates, the Caribbean, the Commonwealth, and the Greater Toronto Region, cricket is now the fastest growing sport on Canadian college and university campuses. This iswhere Canadian College Cricket plays a vital role in bridging the gap between the increasing need for students to be able to pursue their passion for cricket as well as realize their educational goals.