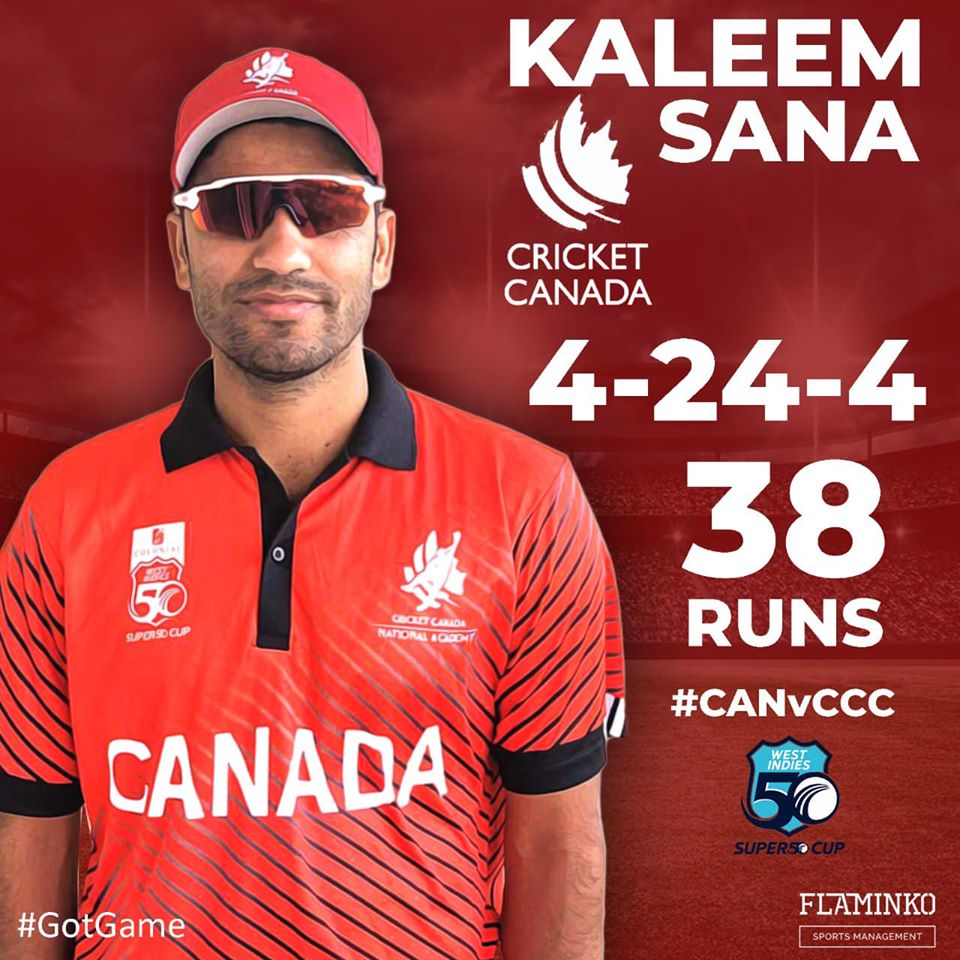 Canada rode a strong all-round performance from Harsh Thaker to a 51-run victory in their November 25 final 2019 Colonial Medical Insurance Super50 Cup match. A crisp maiden List A hundred from the Combined Campuses & College captain Paul Palmer failed to prevent the Canadians from romping to their second Tournament victory over the hapless Marooners.

Having lost the toss and been sent in to bat, the Canadians were 112 for three before they stumbled to 149 for seven in the 38th over and looked in danger of falling for a sub-par total. Pathan added 41 for the first wicket with Jeet Mehta (10), then witnessed the further quick loss of Nitish Kumar for 4, with just another six runs added to the score.

Pathan added 46 for the fourth wicket with his captain Kanwerpal Thatgur before his belligerent 41 ball 46 run innings finally ended when he was adjudged lbw to Joseph with the Canadian score on 83. Pathan's 44 included five boundaries and two sixes.

Thatgur's defiant innings ended with yet another irresponsible shot, he attempted to pull a Joseph delivery that was pitched well outside hiss off stump over the midwicket boundary, to be predictably caught by Powell well within the ropes. Thatgur scored 29 off 64 balls, an innings that included four fours.

Harsh Thaker chose the final match to have his very best innings of the entire Tournament, a 67 ball 68 that included six fours and tow sixties. He was well supported by Kaleem Sana who hit an aggressive 37 ball 38, that was punctuated by one four and two sixes.

Watched by a small crowd that included Cricket Canada President Ranjit Saini, Thaker and Sana frustrated the Marooners by adding 92 for the eighth wicket. There were no other contributions of note from Kanwar Mann (19), Arslan Khan (5) Shahid Ahmadzai (8) Shreyas Movva (0) and Yax Patel (1) as the Canadians closed on 252 all out, losing their 10 wicket off the very last ball of the 50th over.

Chasing a formidable 253 for victory the Combined Campuses & Colleges were rocked by the early losses of Gian Benjamin (10), Johnathan Drakes (0) and Odain McCatty (0) to be left reeling at 17/3 (4.5 overs) before Palmer and Romaine Morrison (58) added 103 for the fourth wicket to restore some sanity to the proceedings.

Palmer struck 12 boundaries in the top score of 105 from 123 balls but there was little stability from the rest of the batting. Aside from Morris' 58 from 59 balls that included six fours and one six, Gian Benjamin’s 10 being the next highest score!

Thaker, bowling his uncomplicated off-spin, returned the miserly figures of 3-29 from his allotted 10 overs to make him a shoo-in for the Player of the Match award, following the half-century he'd also scored when the Canadians batted. New-ball bowler Kaleem Sana-ur-Rehman was the most successful bowler, taking 4-24 from 8.2 overs, and fellow slow bowler Shahid Ahmadzai supported with 3-37 from eight overs to propel Canada to their second win in the tournament and send the Marooners, last year’s champions, to their sixth defeat.