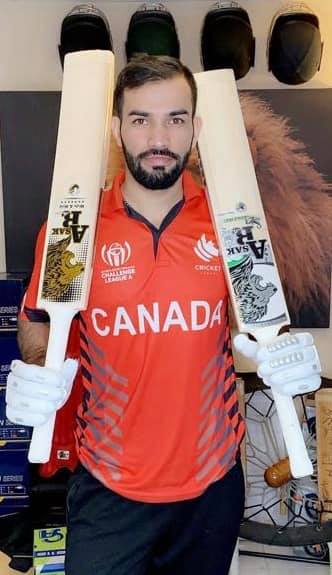 At last year’s Cricket West Indies 2019 Regional Super50 Championships, the Zone A Canada inclusive matches
of which were played in St Kitts, Shahid Ahmadzai captured 10 wickets in the seven matches he played. It was a
highly commendable performance by the now 31-year-old Ahmadzai (born 15 November 1988), who was finally
making his international debut in List A matches for Canada.
During the 2019 Regional Super50 Tournament, Ahmadzai also scored 190 runs from
8 innings to end the Tournament with a commendable 27.14 average. He shared a
significant stand of 103 for the third wicket with Nitish Kumar during Canada’s
match- winning first-round encounter against the defending Champions the
Combined Colleges & Campuses. Ahmadzai’s contribution to the Canadian
innings was a career-high 73 from 87 balls that included five fours and four
fours.
Just recently announced by the Canadian based premier cricket gear
company Arsak Sports as its sponsor player, Shahid Ahmadzai’s journey to
the prominence he enjoyed as one of Canada’s outstanding 2019 Super50
performers, has been frustratingly long and arduous. He will readily admit
to having been a huge fan of cricket for as long as he can remember. He
remembers watching cricket on television as a kid and recalls having had a
dream to become a professional cricket player one day.
In pursuit of that dream, Ahmadzai started playing street cricket with other
kids in Peshawar, Pakistan when he was just 12 years old. Two years later at
the age of 14, he started to play cricket in Afghanistan. Shahid would come
home from school, have lunch then go to cricket practice for 3-4 hours, 6
days a week.
As a student at Afghanistan’s Sayed Noor Mohammad Shah Mina High School,
Shahid’s potential as a very promising, prodigiously talented all-rounder soon
attracted the attention of the country’s cricket authorities. He was scouted
while playing school’s cricket and subsequently selected to play for Afghanistan
at the U15 and U17 levels prior to his eventual inclusion in the Afghanistan
U19 and national team.
Tragedy, however, struck Shahid and his family when his father and older brother
were killed in 2002, by relatives associated with the Taliban. He began playing
cricket for Afghanistan in 2005 and traveled with the youth squad around the
world. In 2009, while playing at the Under-19 Cricket World Cup qualifying
rounds in Toronto, he and five of his teammates sought asylum.Ahmadzai first sought asylum in Canada in 2009, but it wasn’t until 2013 that his claim was heard — and rejected. In the intervening years, the then 29-year-old Shahid was living in Toronto on an open work permit because Canada has suspended deportations of people to war-torn Afghanistan for safety reasons.
With only a Grade 10 education from Afghanistan, Ahmadzai finished high school in Toronto while working in factories, retail jobs, and plumbing. He subsequently also became a Uber driver. Throughout his personal trials and tribulations, he never forgot about his cricket dreams and didn’t ever give up on one day fulfilling his dreams!
Not long after his September 2009 arrival in Canada, Shahid started playing recreationally. He first started to play cricket with the Ontario Cricket Academy(OCA). He played with OCA for about four to five years before leaving to play with the Canadian Cricket Club (CCC).
In 2017, Shahid was selected to represent the Canadian national team in its AUTY Cup fixture against the USA. “That was a great opportunity which I feel really catapulted my career.!
For almost ten years Shahid was engaged in a rigorous routine “I’d get home between 4:30 - 5 a.m. after driving Uber for hours during the night. I’d catch a few hours of sleep, before rushing to my cricket practice at 10:30 in the morning and staying there until 8 p.m. After which I’d get back home to shower and then start taking (Uber) orders to start the cycle all over again,” said Ahmadzai, who has been financially supporting his widowed mother and brother in Kabul.
Sahid subsequently applied twice for permanent residence in Canada on humanitarian and compassionate grounds and was rejected both times. His application was finally accepted in 2019; following his third submission.
As if in celebration of his Canadian permanent resident status finally being approved Shahid was in June 2019, selected to play for the Edmonton Royals franchise team in the 2019 Global T20 Canada tournament. In September 2019, he was named in Canada’s squad for the 2019 Malaysia Cricket World Cup Challenge League A tournament. The following month, he was named in Canada’s squad for the 2019–20 Regional Super50 tournament in the West Indies. He made his List A debut on 8 November 2019, for Canada in the 2019–20 Regional Super50 tournament.
Now having made his mark by establishing himself as an obviously talented all-rounder, capable of outstanding achievements with both bat and ball, Shahid admits to enjoying both roles equally! His personal objectives as a Canadian cricketer from heron in are simple and straightforward. “I want to do good. I would love the opportunity to get back ODI status for Canada. We have a lot of great talent in Canada, I’m hopeful that it is achievable!”
With his many all-round talents at this disposal and his recently provided access to Arsak’s Sports outstanding cricket gear, there’s now every reason to believe in Shahid Ahmadzai’s capabilities for achieving not only his own personal objectives but also those of Canada’s national team as well!