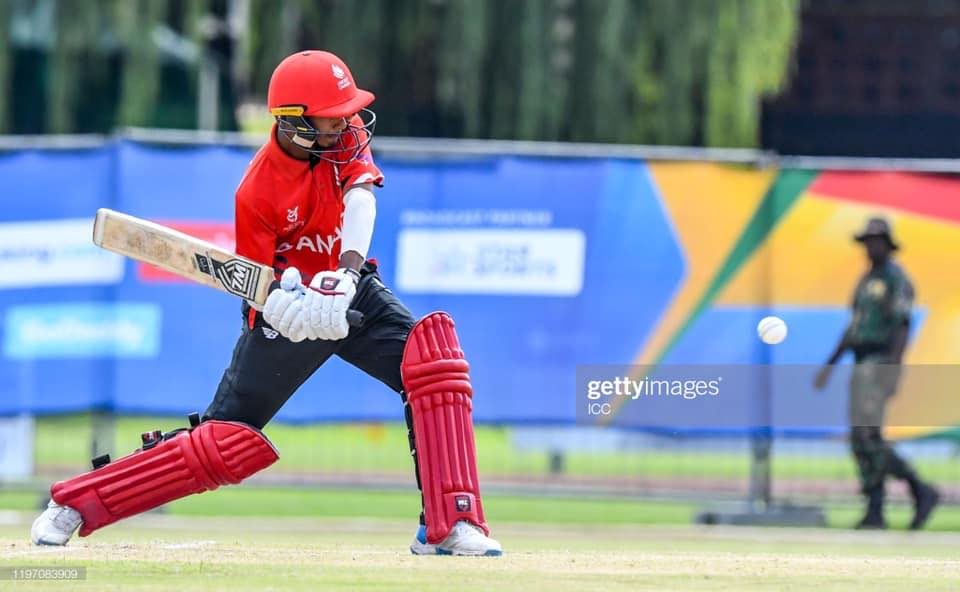 Akhil Kumar’s ICC U19 World Cup Team Of The Tournament 12th Man Selection Is An Inspiration To Others!

Cricket is a funny game with funnier rules. One of them is having an extra player in the 11 man squad who is apparently a ‘fly in the wall’

Canadian all-rounder Akhil Kumar’s selection to the ICC 2020 U19 World Cup Team Of The Tournament as the 12th man might appear to be just another addition to a team that is already packed with talent. Lovers of cricket, myself included, initially questioned why this gifted player was not selected as part of the Playing XI. But Kumar’s outstanding Tournament performances have at least earned him honors and got him noticed.

During the 2020 U19 World Cup Akhil Kumar bagged 16 wickets at an average of 15.37, finishing with six wickets for a miserly sum of 46 runs in Canada’s Plate playoff victory over Japan. This teenage cricketer’s brilliant performance earned him a position right next to India’s Ravi Bishnoi and Afghanistan’s Shafiqullah Ghafari, both of whom were included in Tournament Team, as one of the Competition’s top three wicket-takers.

In terms of cricket, Canada is still a young nation, currently ranked far below the sport’s top ten participating countries. Yet not only was Kumar the sole Canadian player to be selected to the Tournament Team, but he was also the only player from a country outside of cricket’s top 10. His Tournament Team peers were from the eventual champions Bangladesh, runners up India, quarterfinalists West Indies and Afghanistan as well as Sri Lanka! Though his selection as the Tournament Team’s 12th man was based more on his bowling, Kumar also emerged as a top order batsman for his country throughout the Tournament. He had a handful of noteworthy scores, including his 59 in a pre-Tournament Official Warm Up Match against the West Indies. He ended the Competition with an average of just over 24!

The first ever recorder use of a substitute or a twelfth man in first-class cricket occurred during an 1891Varsity match between teams representing England’s Oxford and Cambridge Universities! Frederic Thesiger was substituted by Thomas Case in the Oxford XI, after the former had injured himself during fielding on the first morning of the match.

Since then there have been several memorable instances in international cricket that have featured the 12th man having a significant impact on the eventual outcome of a match and at times even a Series. Although the 12th man’s relegated role of having to wait just beyond the boundary rope, constantly being in a state of high alert to the team’s needs can at times be both frustrating and exasperating. Especially when as in the case of Australian seamer Andy Bichel, it occurs simply as the result of stiff competition for limited available spots on the final playing XI.

While the likes of Glenn McGrath, Brett Lee and Jason Gillespie shone on the field, Bichel carried drinks for Australia on no less than 19 occasions, reportedly the most by any player.
Bichel did it all for the love of his nation. A fine seamer himself, he willingly sacrificed personal aspirations for the betterment of the team and thus gracefully accepted the demotion. Bichel’s graceful act of acceptance did however, play a significant role in setting the benchmarks of character and building the success story of the Australian team’s dominance in international cricket between the period 1995-2009.

As a savior who appeared during troubled times, Marnus Labuschagne was another substitute who played selflessly to force a draw between Australia and England at Lord’s during the 2019 Ashes Series. On the fourth day of the Test, Australian Steve Smith was hit by a bouncer from Joffra Archer and suffered a concussion. Marnus was called in and he faced Archer playing 100 balls in the second innings to save his team from losing.

As much as it is about competing players., cricket can oftentimes also be about game-changers. In the Trent Bridge Fourth Test of an England hosted Ashes Series that was locked at 1-1, Australia was asked to follow-on. With the score on 2/155 and with their captain Ricky Ponting, who was coming off a brilliant 156 in the previous Test, at the crease substitute fielder Gary Pratt ran out Ponting to create the breakthrough that eventually led to England winning the Test and subsequently clinching the Series. A result that broke the 16 year jinx Australia had held on the Ashes.

Cricket is also often full of surprises and destiny sometimes gets written on the field itself. A 13-year-old Indian boy once came to field for a touring Pakistan side during an exhibition game in Mumbai. It was 40 overs a side match between India and Pakistan to celebrate the golden jubilee year of the Cricket Club of India. No one imagined that then anonymous little boy, named Sachin Tendulkar, would just ten years later make his debut against Pakistan and eventually become the greatest ever 21st-century
batsman.

The journey of the twelfth man may seem to be a relegation but it is all about whether the player sees the glass half full instead of half empty and plays his game that way. Even when not being on the field, there is hardly ever a lonesome moment in cricket.

All across Canada, with interest in junior cricket now on the rise, Akhil Kumar’s induction in the World Cup team has been a tale of inspiration. As such the story of his continued rise to success, as evidenced by his most recent honor of having been selected as the ICC’s 2020 U10 World Cup Team Of The Tournament 12th Man therefore has reference to every incident in history where a twelfth man has been pivotal for the team. Akhil Kumar has already created a separate identity for himself . This young man is the torchbearer who by joining the League of stars will keep the spirit of cricket alive and take it forward