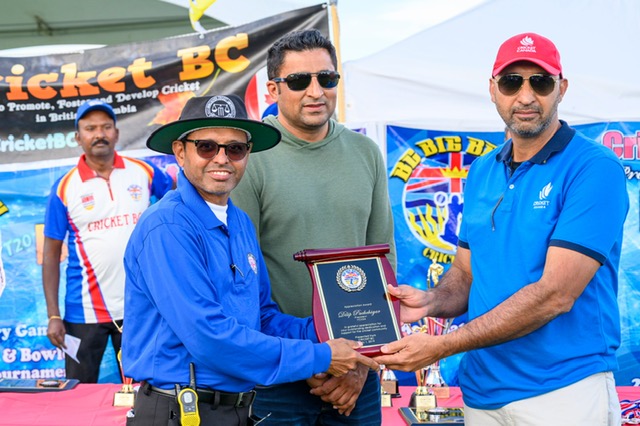 AN OUTSTANDING 2019 FOR CRICKET BC!

It has been an outstanding year for Cricket BC in 2019-20. The
promises and challenges that were made and encountered
have been fulfilled and overcome through sustained team effort
from all those involved. With an exceptional and experienced
management team now guiding its activities, Cricket BC is already
making great progress towards fulfilling its established goals for
2019-20.
AT THE END OF ITS 2019 FISCAL YEAR, CRICKET BC’S TEAM STRUCTURE
WAS COMPRISED AS FOLLOWS:
British Columbia Mainland Cricket League - 90; Over 40’s – 4 ;
Victoria District Cricket Association – 11; Junior teams – 25;
Northern BC / Island Area – 4 and Women’s Teams – 4. Cricket BC’s
hosting of the BC BIG BASH 5th Edition was a major success with
11 competitive teams participating, including IPL and National
Players.
Cricket BC’s other 2019 Season highlights included the successful
staging of the Canada Cup U19, Western T20 and JRR (West)
Tournaments. More grounds have also been added since the 2019
Season. The popularity of the Provincial Junior Programs have also
experienced a substantial rise in BC with the help from both of the
Leagues. School and University Cricket Programs have also grown
in Vancouver and Victoria. Beyond the boundaries, Umpiring and
Coaching Programs are now in place within Mainland (VCU&SA)
and Island (VISCUS) Leagues. Cricket BC’s 2021 Season plans
include the introduction of a BC Super League (BCSL) which
due to COVID 19 could not be established this year as initially
scheduled. 6 Teams were successfully auctioned, but have to
hold off this year due to the pandemic situations.
During the year Cricket BC was also actively engaged in the
further promotion of Women’s cricket. Towards this end a
successful Inter-Provincial tournament was hosted.BC representative teams also enjoyed success in most of the Inter Provincial Tournaments including the JRR (West),
Women’s, Senior Men’s. The BC Women’s Team were the
Western Champions for the 4th year. BC now has nearly
4 full team rosters for women’s cricket.
Cricket BC were also hosts of a Canada Camp that
was conducted by Cricket Canada’s Selectors under the
guidance of Dilip Vengsarkar. The Province also hosted
a twelve week U18 Junior Camp for High Performance
Juniors. Women’s Selections /Trials Camps were also
conducted by Cricket BC Women’s Coach. As one of the Season’s most outstanding highlights a 10 year old girl, Mynah Thomas, was awarded as Edmonton’s Best Bowler!
Towards the further growth and development of cricket within the Province, Cricket BC also successfully staged a number
of Junior Programs through its Indoor Academy as well as outfield practices and matches. The Province also enjoyed
its successful establishment of a thriving Saturday Morning Junior League. A Kanga Cricket Junior Championship
targeting players between the ages of 6-15 years was also established by the BCMCL. Cricket BC’s view is that Juniors
participating through the U19 Jack Kyle provides tangible evidence of the success that can actually be achieved
through the strength and determination from participating
youngsters. An U18 Tournament was also staged through the
generous and kind assistance of the Kids Play Organization.
School Leagues have also become a growing success, with
Inter School competitions being hosted for competitive teams
from both the Island and Mainland schools.
Cricket BC’s received Provincial Government Funding was utilized
towards the targeting of Junior Program development. This is a
reflection of Cricket BC’s recognition of the need to develop
more Junior and Women Programs towards the creation of
additional avenues for increased funding from the various
Provincial and Federal programs that are available. Cricket BC
has also initiated plans for the acquisition of TV broadcasting rights to generate funding from cricket match telecasts.
Plans to secure financial sponsorships for the BC BIG BASH and other various National level tournaments are also being developed. Universities are also now being targeted with plans being developed for the establishment of a full fledged University and College League.