As expected Steven Smith and David Warner will make their international returns at the World Cup after both were named in Australia’s 15-man squad.Their comeback has come at a price with Peter Handscomb a surprise omission from the squad. Josh Hazlewood has also been left out.

It means that Warner and Smith, who also return to the CA central contract list for 2019-2020, could play their first international since the Cape Town Test on June 1 against Afghanistan in Bristol when Australia start the defence of their World Cup campaign. Before that, there is a training camp in Brisbane with three one-day games against New Zealand – not full internationals – followed by warm-up matches in England.

The pair has been using the IPL to help prepare for the World Cup following elbow surgeries. Warner has been in sparkling form for Sunrisers Hyderabad but Smith, whose injury was more severe, has found life a bit tougher for Rajasthan Royals.

Mitchell Starc has been included among a group of five fast bowlers despite not having played in Australia’s last 13 ODIs, but there was no room for Hazlewood, who has been sidelined with a back injury since January. The selection panel picked Pat Cummins, Jhye Richardson, who is also returning from a shoulder dislocation, Nathan Coulter-Nile and Jason Behrendorff as the other pacers. Chairman of selectors Trevor Hohns said Starc and Richardson had been selected subject to fitness. Squads can be changed until May 23 without ICC permission.

Alex Carey is the sole wicketkeeper in the squad, leaving Australia exposed if he gets injured during the warm-ups or any World Cup game. They will rely on the cover available in the Australia A squad, which includes Handscomb, Tim Paine and Matthew Wade although they wouldn’t be available for an injury shortly before the toss.

As expected, both Adam Zampa and Nathan Lyon have been included as the two spinners in the squad.

Bangladesh have named pace bowler Abu Jayed as part of their 15 for the World Cup. Jayed, who is yet to debut in ODIs, had impressed with his swing bowling during the Tests in New Zealand last month. Middle-order batsman Mosaddek Hossain, who last played for Bangladesh in the Asia Cup in September 2018, also made a comeback for the showpiece event.

The two made it into a mostly settled Bangladesh side, which, however, had no place for pacer Taskin Ahmed and batsman Imrul Kayes.

The five senior players – Mashrafe Mortaza, Shakib Al Hasan, Tamim Iqbal, Mahmudullah and Mushfiqur Rahim – form the core of the squad, with the likes of Rubel Hossain and Mustafizur Rahman among the other experienced members.

Soumya Sarkar and Liton Das have form issues, but they have been picked as potential match-winners. Mohammad Mithun, who was one of the better batsmen during Bangladesh’s recent ODI exchanges against New Zealand, will form part of the middle order.

Teams can make changes to their World Cup squads till May 23, without seeking permission from the ICC. ESPNcricinfo understands that the April 23 deadline to name the 15 was set by the ICC with a view to get logistics in order, such as booking rooms and travel for teams.

The selectors have also included the uncapped duo of Yasir Ali and Nayeem Hasan in the squad that will face Ireland and West Indies ahead of the World Cup. 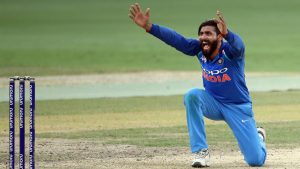 in India’s squad of 15 for the 2019 World Cup. The selection panel, led by MSK Prasad, and Virat Kohli met at the BCCI headquarters in Mumbai on April 15 and named the men who will be heading to the UK in late May to try and win the trophy for the third time. While most of the slots had been firmed up well in time, there were question marks around the No. 4 position in the batting order, which many players have auditioned for with varying degrees of success in recent months.

Ambati Rayudu and Pant were among the contenders for the spot, but the selectors seem to have placed their faith in Karthik, with Vijay Shankar marked as an alternative if required.