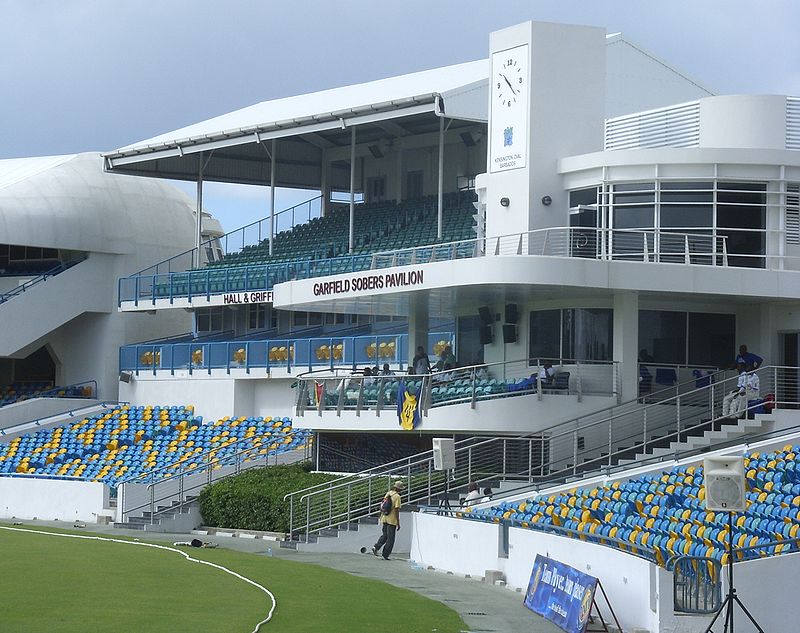 As the host venue for the Semi-finals and Final of the recently concluded Caribbean Regional Super50 Competition, Barbados’ Kensington Oval has long been considered as the Mecca of West Indies cricket. Located on the outskirts of Bridgetown, the refurbished Kensington Oval also hosted the Final of the ICC 2007 World Cup, the only time the global quadrennial tournament has ever been played in the Caribbean.

Kensington Oval is Barbados’ oldest cricket ground, having been established in 1882 when Pickwick Cricket Club leased 4 acres of pastureland from Kensington Plantation and started to develop it as a cricket ground with a clubhouse. A statue of His Excellency, The Right Honorable Sir Garfield Sobers, National Hero of Barbados, universally recognized as the world’s greatest cricketer and in whose honor the Players Pavilion is named, dominates the entry to the Oval.

For any authentic cricket lover a visit to Kensington Oval and indeed its host island Barbados should be a “Must Do” entry on their lifetime Bucket List.

As an island country in the Lesser Antilles, Barbados is 34 kilometers (21 mi) in length and as much as 23 kilometers (14 mi) in width, amounting to 431 square kilometers (166 sq mi). It is situated in the western area of the North Atlantic, about 104 miles east of the islands of Saint Vincent and the Grenadines, and 250 miles northeast of Trinidad and Tobago.

Barbados has an estimated population of 284,589 people, with around 80,000 living in or around Bridgetown, the largest city and the country's capital. In 1966, Barbados became an independent state and Commonwealth realm, retaining Queen Elizabeth II as Head of State.

As a coral island Barbados is now one of the Caribbean's leading tourist destinations and one of the most developed islands in the region. On the West Coast of Barbados, coral shore beaches of fine white sand stretch along a blue-green sea. Coral reefs fringe the Barbados shoreline to provide excellent snorkeling and Scuba Diving. The constant breeze of the trade winds give Barbados a mild and pleasant tropical climate.

Barbados is a very beautiful island, with lots of art, activities, night life, music, history and some of the best restaurants to be found anywhere. But what makes Barbados even more special, and the reason why so many visitors keep returning to the island year after year, is the people.

Barbadians, "Bajans" are warm and friendly souls, always ready to greet you with a sincere smile. They make you feel welcome and special, in this lovely Caribbean Island.

Music festivals, sporting events, culinary affairs and performing arts – Barbados’ annual event calendar is brimming with exciting opportunities and unforgettable experiences. Every day brings something new to discover in Barbados. The southern and western coasts of Barbados are popular, with the calm light blue Caribbean Sea and their white and pinkish sandy beaches. Along the island's east coast, which faces the Atlantic Ocean, there are tumbling waves, which are perfect for light surfing.

Contrary to its size, Barbados offers innumerable hotel options that include everything from the grand elegance of internationally acclaimed brand-name accommodations to a distinct selection of enchanting family-run boutique inns. Some of these hotels bear significant historical significance to the island and they provide a charm like no other. One such property is the South Coast located Accra Beach Resort, which has become recognized as the home of West Indies cricket in Barbados, as it regularly hosts teams and officials for Cricket West Indies events.

Transport on the island is also very convenient, with 'route taxis', called "ZRs" (pronounced "Zed-Rs"), traveling to most points. They generally depart from the capital Bridgetown or from Speightstown in the northern part of the island. There are several locally owned and operated vehicle rental agencies in Barbados, of which Courtesy Car Rentals is a well established favorite among visitors.

The island's lone airport is the Grantley Adams International Airport. It receives daily flights by several major airlines from points around the globe, as well as several smaller regional commercial airlines and charters. Shopping districts are popular in Barbados, with ample duty-free shopping. There is also a festive night-life in mainly tourist areas such as the Saint Lawrence Gap.

The largest carnival-like cultural event, which takes place on the island, is the Crop Over Festival. Crop Over is an important event for many people on the island, as well as the thousands of tourists that flock to the island to participate in the annual events. It gets under way from the beginning of July, and ends with the costumed parade on Kadooment Day, held on the first Monday of August.

There are so many ways to tour Barbados and explore its many interesting sights and activities. Perhaps you may just want to lie on one of the many palm-fringed, coral sand beaches. Then there are the land tours, from large air-conditioned bus excursions around the island, to quaint jitney expeditions through the gullies and hills of the interior. Whatever your preference, there is an island tour to cater to your wishes, which will be weaved into a wonderful experience!

As a unique Caribbean paradise, surprisingly sophisticated, friendly, fun and always naturally charming, Barbados beckons as does its renowned cricket venue, the Mecca that is Kensington Oval.

Barbados Kensington Oval’s next major cricket hosting will be the Jan 23 – 27 West Indies – England First Test to be followed by the First, Second and Third One Day Internationals between the two teams on Feb 16, 20 & 22 respectively./