Canada remained the last undefeated team in Group B of the T20 World Cup Qualifier after coasting past Nigeria by 50 runs in Abu Dhabi in their October 21 Day-Night fixture. 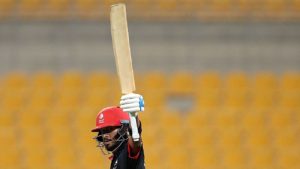 Nitish Kumar once again top-scored making an unbeaten 57 off 36 balls, though he and the rest of the Canada line-up were beneficiaries of some porous fielding from Nigeria.

Nigeria’s bowlers put in a diligent effort led by Chima Akachukwu in the Powerplay. The medium pacer dislodged both openers, captain Navneet Dhaliwal and Rodrigo Thomas, by sticking to a full length as the former holed out to long-off while the latter was bowled driving to make it 41 for 2.

Kumar arrived in the fourth and stayed until the end, unfurling a series of drives and cuts to pepper the off side boundary. Wickets continued to fall at the other end though as Abraash Khan could not capitalize on a botched runout chance after the keeper took the bails off before the ball arrived, eventually driving a catch to long-off for Daniel Gim’s first wicket.

Nigeria’s Skipper Sylvester Okpe then covered 20 yards to hold onto a skied slog off his own bowling to dismiss Ravinderpal Singh. Saad Bin Zafar soon followed, adjudged leg before to fall to Daniel Akeju in the 17th to make it 112 for 6 in the 17th.

It could have been even trickier for Canada had Sulaimon Runsewe held onto a simple skied chance at point when Kumar was on 37 off Akeju, but the chance went down. Kumar survived another close shave on 43 when a lofted drive pierced through a leaping effort at long-on for six. He celebrated his good fortune by bringing up his 50 off 32 balls on the next delivery with a scorching straight drive past the umpire for a boundary.

Hamza Tariq showed little mercy at the opposite end. He hammered three sixes – over long-off, cow corner and extra cover – in his rapid cameo to lift Canada to an easily defendable total.

Only two out of the top eight in Nigeria’s batting order made it into double-digits in reply. Runsewe and Chimezie Onwuzulike shared a 57-run third-wicket stand to rebuild after Dillon Heyliger’s double-strike in the second over had reduced Nigeria to 2 for 2.

Runsewe eventually fell slicing Saad’s left-arm spin to Dhaliwal at point. Onwuzulike ran out the captain Onikoyi two overs later with a poor call to cover before his own innings ended missing a flick across the line to Dhaliwal’s part-time medium pace to make it 77 for 5 in the 13th. Nigeria’s lower order did their best to stretch the match to the full 20 overs, but Canada was under little pressure the rest of the way.