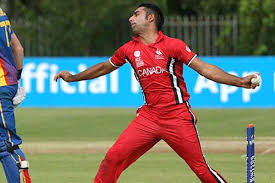 Canada Easily Defeats Cayman Islands For The Second Time Around!

Canada’s August 22, 2019 7th Match ICC Men’s T20 Americas Region Final win against the Cayman Islands proved to be even easier than the first had been. Having defeated the Caymans by 84 runs in their August 18 first encounter, the Canadians romped to an eight wicket victory in the second, reaching the paltry 92 run victory target they had been set for the loss of only two wickets with 47 balls to spare.

Batting first after having been sent in by Canada’s skipper Navneet Dhaliwal, the Caymans lost wickets regularly against some economical and penetrative Canadian bowling. Only three batsmen, Gregory Strydom(23), Chad Hauptfleisch (16) and Troy Taylor (11) managed to reach double figures as the Caymans scraped to 92/7 off their allocated 20 overs.

Bowling for Canada, Saad Bin Zafar with the outstanding figures of 3-8 off his four overs was the main wicket-taker. Nikhil Dutta 1-16 (4), Nitish Kumar 1-21 (3) and Dillon Heyliger 1-23 (4) were the other Canadian wicket-takers.

Set to make just 92 for victory in 20 overs, the Canadians got off to a most inauspicious start losing both openers without a run having been scored. Rizwan Cheema was the first to fall, bowled by Morris off the fifth ball of the very first over. Cheema was gone for a duck and Canada were 0-1. That soon became 0-2 as Rodgrigo Thomas was caught at the wicket by Hauptfleisch, first ball off the bowling of Ebanks.

Skipper Navneet Dhaliwal then came to his side’s rescue with his second fifty in as many innings. He scored an aggressive 34 ball 53 not out that included 3 fours and 5 lofty sixes. Dhaliwal added 95 for the third wicket with Nitish Kumar who compiled a patient 35 ball 37 not out with 2 fours and 2 sixes. The two safely took the Canadians to their required 92 run target in just 12.1 ending with 95/2.

The win took the Canadians to 7 points and solidified their position at the top of the standings. It also left the Canadians requiring only one win from their remaing two matches to progress to the next stage of the ICC 2020 T20 World Cup qualification process.