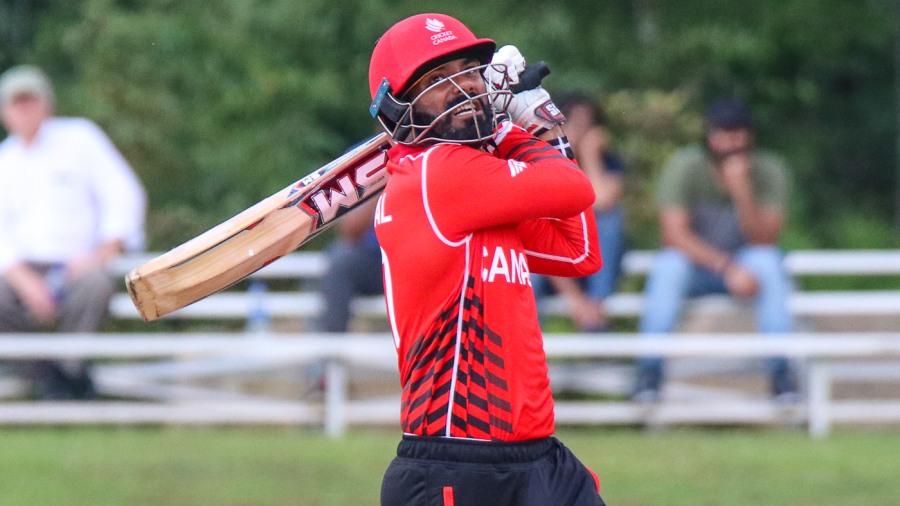 The August 21, 2019, 6th Match of ICC Men's T20 World Cup Americas Region Final played at Bermuda’s Sandys Parish, resulted in a most deserving four wicket win for Canada over their USA arch rivals. The win took Canada to the top of the Tournament’s four team standings, with 5 points from 3 matches played.

Having won the toss and elected to take first strike, the US got off to a solid start with their openers, Xavier Marshall and Monank Patel, posting 39 off only four overs before the first wicket fell. Patel was the first to go, caught by Rizwan Cheema off the bowling of Saad Bin Zafar for a 12 ball 19, which included 2 fours and 1 six.

Marshall and Stephen Taylor then added 36 for the second wicket before Marshall fell, stumped by Hamza Tariq for 22 off Nikhil Dutta in the ninth over. From 75-2 the US declined to 111-5 in the 17th over as three further wickets fell at fairly regular intervals. Hayden Walsh, Timroy Allen and Cameron Gannon however then combined to add a further 33 runs, off just 4 overs, in aggressive sixth and seventh wicket partnerships that helped the US to reach 144/6 at the end of the 20th over.

Set 145 to win off their allocated 20 overs at a required run rate of 7.2, Canada got off to a shaky start losing both openers, Cheema 10 (7) and Thomas 11 (14) by the start of the 5th over with only 28 runs on the board. Skipper Navneet Dhaliwal however provided the required solidity to the innings with a 41 ball 54 that included trios of fours and sixes.

Dhaliwal was involved in two key partnerships. The first with Nitish Kumar (14) added 34 for the 3rd wicket off just 3 overs and 2 balls. The second, 31 off 5 overs and 3 balls with Saad Bin Zafar (20), was only slightly less aggressive.

haliwal eventually fell for his well-made 54 off the very first ball of the 16th over. At that stage the Canadian’s score was 112, still 33 runs behind with only 21 balls remaining. Some aggressive hitting from Dillon Heyliger 23 (11) in partnership with Hamza Tariq 11 (10) however, easily saw the Canadians home to their four wicket win with five balls left to spare.

Canada Easily Defeats Cayman Islands For The Second Time Around!