A superb unbeaten 86 run seventh wicket partnership between unlikely batting heroes Harmjeet Singh Bedi 40 (62) not out and Udaybir Walia who remained undefeated on 42 (53), piloted Canada to a morale boosting 4 wicket win over the United Arab Emirates in their February 1 ICC U19 World Cup Plate Championship match. The win, only their second of the Tournament, secured a thirteenth place finish in the sixteen team Tournament for the Canadians.

Having won the toss and sent the UAE in to bat, Canada’s bowlers led by Walia, ably assisted by the indomitable Akhil Kumar, bowled with superb control to restrict the UAE’s innings to 174 all out after 44.1 overs. Alishan Sharafu 65 not out was the only score of note as the UAE batsmen fell to the bowling wiles of Walia 3-16 (3.1 overs) and Kumar whose 3-37 (10) lifted his Tournament wickets tally to a highly impressive 16.

Chasing 175 for victory in 50 available overs, at a very comfortable required run rate of 3.5 runs per over, Canada’s batsmen initially made hard work of the chase as wickets fell at fairly regular intervals. Akhil Kumar scored 37 and Nicholas Manohar followed up his century in Canada’s previous match against Japan with an aggressive 25 ball 20. At the start of the 25 over Canada was however perilously placed on 93-6, still needing another 81 runs for victory. Rishbabh Mukerjee’s offspin had proven to be particularly problematic for Canada’s batsmen accounting for four of the six wickets to fall. Mukerjee finished with the impressive figures of 4-62 (10) before Bedi and Walia came to Canada’s rescue with their heroic seventh run partnership to secure the morale boosting win for their team. 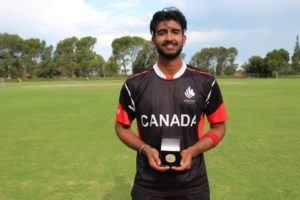 Canada’s Udaybir Walia was adjudged Man of the Match for his bowling and batting heroics 3-16 (3.11 overs) and 42 not out.