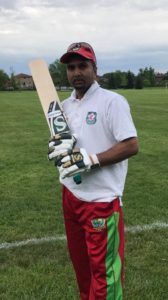 Surendra Seeraj is a member of Cricket Canada’s National Selection Committee. The Committee comprises of 5 national selectors from different Provinces, a Chairman and the National Team Coach. Its role is to select players and put together the best possible team for both the Canadian Senior Men’s and U19 national teams.

In Surendra’s view however, the role of a National Selector goes well beyond just sitting down to select national teams. At times he will be called upon to travel to different Provinces for national events. Surendra is always on the look out to identify new and upcoming talented players as a means of bringing such individuals into the national system.

Surendra also attends local League matches to watch current national players play for their respective clubs. At times he and his fellow Selectors will also liaise with the National Coach to assess players’ fitness levels and review what they may be doing to maintain their places on the national team. 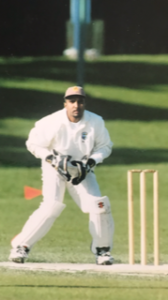 Being a national selector is a very challenging task which at times can far too often seem to be a thankless and under-appreciated job. Surendra is one of the very few from his   generation that’s a home grown Canadian cricket product. He was born in Guelph, Ontario and started playing cricket in Toronto at the age of 12. He made the Canadian National U19 team in 1991 as a wicket-keeper/batsman and was also given the honor of being the vice-captain. As a member of Victoria Park CC in the T&DCA from the early 90s, Surendra went on to make the National Men’s Team in 1994. His last stint on the National team was in 2006 in the America’s Cup.  Surendra became a national selector in June 2018 and is now loving the challenge and cherishing the opportunity to be able to give back to the sport that he loves.

Fitness is also an important component when selecting players to represent Canada. In addition to stats/performances Canada’s National Selectors also look at the commitment and dedication of the respective players. They are always on the lookout for those players who work hard at their game and are always looking to improve. Those who will readily fit in to the team’s composition and provide an overall complimentary player package are also considered for selection.

Canada’s National Cricket Selection Committee, after receiving instructions from the Cricket Canada Board, will meet before an international Tournament to select the national team for that upcoming competition. As part of the process the National Selection Committee will review the past performances from recent international events to assess if any players should be eliminated. They will also of course identify suitable replacements for any vacant spots.

As a member of the National Selection Committee, the National Coach’s identified requirements towards the best team composition are also considered. Once the team has been chosen by the Committee it is then forwarded to the Cricket Canada Board for approval. Following the Board’s approval the players are then notified accordingly of their respective selections.

Surendra Seeraj’s view is that Cricket Canada’s current panel of National Selectors, comprised of Shantikumar Kantharatnam and himself from Ontario, Dishant Mehta of Alberta, Baber Sandhu from British Coulumbia and Nova Scotia’s Reeze Telling along with Ron Dipchand as its Chairman, is a very good, qualified group. They have all played the game at the national or first class level. Surendra stresses that he and his fellow Selectors are not under any obligations to select players from Provinces outside of Ontario, even though they may not be skilled enough to play at the international level. As in any sport, politics may tend to make its way to the selection panel at times but as a selector, he is very stern in his belief that selection should always be based purely on merit.

Surendra has at times found himself being “unliked” because of his stern beliefs, but he doesn’t break that easily. He has refused to let individual influence or politics get in the way of his established criteria for selecting players. He is cognizant of the fact that when the team wins no one mentions anything about selectors. Conversely if and when the team loses, the Selectors are among the first to be blamed for the loss.  Surendra sees his job solely as having a role in the selection of the best possible combination of players to represent Canada.

Canada being such a huge country and having cricketers spread out in different Leagues across as many as 10 Provinces, however often makes the job of selecting the best possible national team difficult at times especially in terms of actually seeing players perform over sufficiently long periods of time. In Surendra’s view Toronto and Ontario have always maintained very high standards of cricket. This has been reflected in the undeniable historical tendency for the majority of national team players to be Ontario based. As such as a National Selector, Surendra Seeraj would ideally like to have as many as possible of the top players from other Provinces, those who think they have the potential for national team selection, come to Toronto to play during the summer.

The T&DCA, Surendra says, is known to have the highest level of cricket in Canada. It attracts players from all over the world to come play for various clubs during the summer. As such, having good players from Provinces outside of Ontario come to Toronto to play amongst and against other top level players; would be wholly beneficial to their chances for national team selection. That would provide Surendra and his National team Selection colleagues with multiple opportunities to assess non Ontario players’ respective abilities against high caliber competition. Not just for one or two games as in a ‘Trial’ or selection camp, but over an extended period of time.

The financial situations or job security of individual players are other factors which unfortunately very often affect having the strongest possible team selected at a given time, especially at the senior level. Regrettably the current available earnings from playing cricket in Canada invariably doesn’t pay the bills. Consequently Canada’s national cricketers also have to work for a living. Sometimes an employer may not grant the necessary time required or the player cannot afford to leave his job without pay to go on national team duties. When this occurs, as it often does, the National Selectors may be forced to select a second string player to fill in.

The obvious and immediate solution to the foregoing would of course be for Cricket Canada to provide centralized financial support contracts for a group of qualified national players, as is now the routine practice in most other cricketing countries. A promise that has been made but which unfortunately is yet to materialize.